A Council Father on Vatican II: “It stripped the Mass of all sense of holiness and reverence” 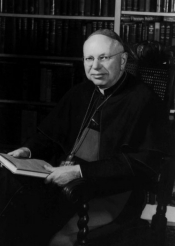 Editor’s Note: Back in 1971, the Archbishop of Portland, Oregon, commented in his archdiocesan newspaper on what was already happening to the New Mass, even at that early date--something Pope Benedict XVI himself would confirm many years later on February 14, 2013, when he noted in his address to the Roman clergy that the New Mass had been "trivialized" throughout the whole world. We quote the late Archbishop Robert J. Dwyer (who attended every session of Vatican II) with a sense of loss and even longing in our hearts for the days when Catholic bishops were still vigilant defenders of the Catholic Faith. Please, God, send us holy priests and bishops once again. …Michael J. Matt

When whole segments of the contemporary Church are set on a downward course of vulgarization, of anti-intellectualism, of revolt, and rebellion against all standards and authority, it is exceedingly difficult to put a stop to the trend, holding back the enormous weight, and then attempting to turn these segments back the other way, to begin all over again the slow, laborious climb to the high and distant peaks.

It is just such a catastrophe which overwhelms us today.  We recall the dream of St. Francis and Pope Innocent III where the little Poor Man was holding up with his feeble hands the collapsing fabric of the Lateran…

What was the great poetic style of the Bible has been transmogrified and cheapened into some of the most graceless, flat, plodding prose ever inflicted upon undeserving dullards.  Matters are bad enough now, but wait until the new Order of the Mass is released as compulsory for a revelation of what crimes can be committed by men in committee!

It might have been thought, in the interest of ecumenism, that consideration could have been given to strengthening the old Douai-Challoner text with the great style, the ‘organ roll’ of the King James version.  But no!  In the minds of those commissioned by hierarchy to do the work, the great object or target, manifestly, was to denude the liturgy of its last claim to literary dignity…

With polite pious acquiescence, the Bishops received the results with no more than an occasional feeble, almost only grunted protest.  Thusly, do we lose a priceless cultural inheritance.