PREDATOR BISHOPS: It’s Time for You to Go 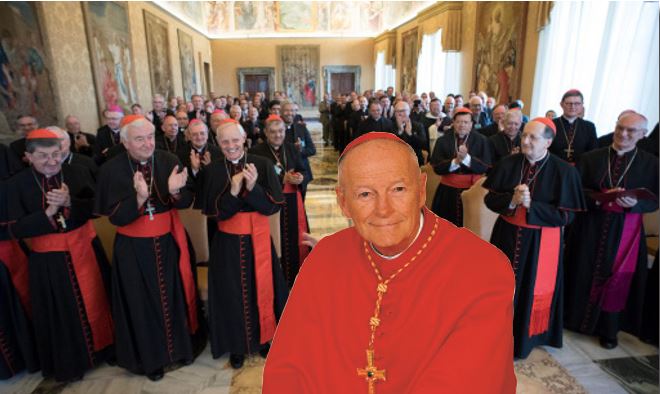 Editor's Note: The following article is the latest installment of our popular column, "The Last Word", which appears on the last page of every print edition of The Remnant. Given today's news out of Pennsylvania, I've decided to post it here, as well. Pray for the Church.  The evil Spirit of Vatican II is finally silencing the Church completely, at least in all areas that matter. It has emasculated the Catholic priesthood in a way befitting its thoroughly emasculated liturgy that for fifty years has been burying the very idea of sacrifice in the Mass. Without sacrifice what need is there for priests? The Roman Catholic priesthood is being spiritually castrated. After all these years, it is good that the evil spirit is now finally being exposed, but let us not forget what happens to us and to our children once/if Holy Mother Church is silenced and the whole world is left without any moral authority at all. There are no winners here, other than the forces of hell itself. At this point, nothing will correct the course and right the ship other than a formal rejection of the Modernism in the Church that has given us stones rather than bread, turned too many of our priests into predators and left wolves prowling about where shepherds used to stand. Restore Catholic Tradition now! MJM

A long standing saying among priests is that once we are ordained, we forfeit all rights, except the right to Christian burial. Actually, this is not far from the truth, as four priests discovered recently. As widely reported, four Catholic priests attended a President Trump rally in Montana—in collar. They were seated in an area that made them highly visible to television cameras, exposing them to the enemies of liberty.

Predictably, one of the Montana bishops responded quickly with a pathetic public apology for the single most unpardonable sin: supporting Donald J. Trump, President of the United States. The bishop wrote:

I was not aware that the priests observed at the Trump rally would be in attendance. I was likely just as shocked as most to see that they were seated in a very prominent location in clerical attire behind the podium where the President would speak…One told me he is not a republican [sic] and I believe the other isn’t either. They said in the line waiting to enter, there were people who spoke openly of their distain from President Trump as well as Democrats who attend the rally so it was not solely a republican event. A number were there to protest against him and many other [sic] just to see a president…I myself had been invited to the rally but declined knowing that I would likely be used in the same manner. And I’m not what you would call a supporter of many of the President’s policies. I have received apologies from the two priests. It is highly unlikely that there will be a repeat appearance.

The bully bishop was so anxious to throw his priests under the ecclesiastical bus that he actually stumbled under the bus himself. Turns out this bishop is more publicly political than are his priests. Note that in his letter quoted above, the bishop gave prominence to the word “Democrats” with a large “D” but failed to capitalize the word “republican.” Even more telling, note that he felt compelled to include the disclaimer: “And I’m not what you would call a supporter of many of the President’s policies.” We are not at all surprised to read that, Excellency, as most of the American bishops are cheerleaders for the Democrats.

The other Montana diocese is currently without a bishop but the acting diocesan administrator was also quick to throw his brother priests under the bus and is also guilty of applying a political double-standard. Soon after this administrator chastised publicly the priests for their presence at a Trump Rally, a photo was revealed of him in collar at a public event supporting a pro-abortion, pro-perversion state governor. Predictably the diocese issued double-speak double-standard justification to protect the administrator.

While on the topic of double-standards and throwing priests under the bus, even more egregious examples of bully bishop behavior abound in the area of clergy sex abuse. It is now common practice in dioceses to respond to “credible” allegations of sex abuse by a priest with the immediate suspension of the priest. What is the working definition of “credible”? Get this: that which is not manifestly false or impossible!

Contrast this policy regarding priests presumed guilty with the standard which applies—or rather does not apply—to bishops. Take, for example, the infamous case of once Cardinal Theodore McCarrick, aka “Uncle Teddy,” a prelate with a long sordid history of predatory behavior toward seminarians and at least two credible allegations of sexual abuse of minors decades ago, who is only now being disciplined. Countless credible sources have provided details of decades of his decadent behavior, an “open secret.”

Preview the August 15, 2018 print edition of The Remnant HERE

Another example of the double-standard and double-cross practice of prelates vis-à-vis their priests occurred in another diocese not long ago. The bishop there was under close scrutiny by the media for having promoted and protected a predator priest, against the vigorous objections of his chancery staff. In order to deflect attention from himself, he handed over the files of all his priests to law firms with a public promise to “leave no stone unturned” regarding possible misbehavior. Months later was it revealed that the bishop himself had at least a dozen credible allegations against him for inappropriate behavior with seminarians and young priests. “No stone left unturned” – except for the boulder covering his own sins. By the way the papal nuncio at the time, an old acquaintance of the prelate, was complicit in the cover up.

The Last Word is not surprised by the abusive and predatory behavior of prelates; we are only surprised when revelations of their dark behavior are exposed to the light, often by secular sources and only after all attempts by their brother bishops and the Vatican to conceal their crimes have been exhausted. If a bishop or cardinal is ever thrown under the bus by the hierarchy, rest assured it was done only as a last resort.

Which brings us to our final point: while the scandal of sexually abusive priests has already been exposed to the faithful and the world, the predatory behavior of bishops continues to be hidden and protected, with rare exception. Does anyone really believe that Uncle Teddy is an anomaly among prelates? There are many more Uncles among bishops, a few of whom have been exposed: Uncle Joey and Uncle Johnny, Uncle Ken and Uncle Keith, Uncle Tommy and Uncle Tony, Uncle Bobby and Uncle Larry, Uncle Danny and Uncle Patty, and good ole Uncle Rembert. Add to this Uncle Teddy and you have The Dirty Dozen.

But some would have you believe otherwise, such as one Jesuit promoter of LGBT causes. Commenting upon the McCarrick scandal in the modernist Jesuit magazine America, Father James Martin wrote:

To be clear, at least in my experience, these situations are not common either in diocesan life or religious life and are far from “rampant”—a word that one reporter used in a conversation with me recently. Cardinal McCarrick’s case should appall everyone, but it is not, at least as far as I know, the norm.

Well, The Last Word has decades more formation and ministerial experience than Father Martin and we can tell you from our own experience that priest and prelate homosexual predator behavior is rampant and has been the norm. Decades ago we approached prelates about clerical sexual abusers and our concerns were summarily dismissed; we also approached members of the faithful and we were simply disbelieved.

So what is to be done? Apply the same standard to prelates as is now applied to priests: scrutinize their files and histories by an independent agency to leave no stone unturned when it comes to sexual abuse or harassment, whether victims are minors, seminarians, priests or anyone. Given five decades of behavior, it would be no surprise if more than half of the prelates were to be exposed as predators and/or protectors!

But that will not happen anytime soon under Francis, who has shown himself to be a promoter and protector of predator prelates, or with this Vatican, which appears to be a den of homosexual perverts.

Catch Father Celatus's "The Last Word" in every Print/E-edition of The Remnant!

[Comment Guidelines - Click to view]
The Remnant values the comments and input of our visitors. It’s no secret, however, that trolls exist, and trolls can do a lot of damage to a brand. Therefore, our comments are heavily monitored 24/7 by Remnant moderators around the country.  They have been instructed to remove demeaning, hostile, needlessly combative, racist, Christophobic comments, and streams not related to the storyline. Multiple comments from one person under a story are also discouraged. Capitalized sentences or comments will be removed (Internet shouting).
The Remnant comments sections are not designed for frequent personal blogging, on-going debates or theological or other disputes between commenters. Please understand that we pay our writers to defend The Remnant’s editorial positions. We thus acknowledge no moral obligation whatsoever to allow anyone and everyone to try to undermine our editorial policy and create a general nuisance on our website.  Therefore, Remnant moderators reserve the right to edit or remove comments, and comments do not necessarily represent the views of The Remnant.
back to top
Last modified on Tuesday, August 14, 2018
Tweet
More in this category: « Vatican to ‘Reform’ Contemplative Orders, Enforce “Fidelity” to Aims of Revolution Saul Alinsky and "Saint" Pope Paul VI: Genesis of the Conciliar Surrender to the World »