Lock Him Up! The Predator’s Progeny

“Where the tongue slips, it speaks the truth” ~An old Irish Proverb 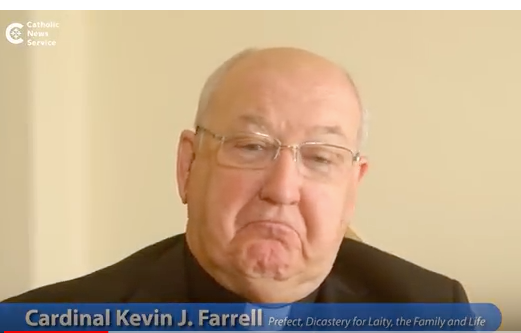 His dismissive arrogance oozes off the computer screen. He barely can contain his congenial disdain for this meddlesome matter. One scant minute is all he can muster to defend, distance and obscure his friendship with a sexual monster. Yet, 60 seconds is all we need to see this calloused soul, this lilliputian of a man with his mediocre and mendacious mind, who rose from the clerical ranks to Vatican heights.

This is the man who can’t even utter one syllable about the danger to children of the Church’s worse serial predator Cardinal?

Cardinal Kevin Farrell, Prefect of the Pontifical Dicastery for Laity, Family and Life should be feeling the heat from the McCarrick Scandal. Yet, his pathetic and perfunctory performance in his ‘defense video’ suggests otherwise.

After all, reports are flooding the news cycle of Farrell’s close relationship and his deep admiration for the now exposed serial predator Cardinal “Uncle Ted” McCarrick.

As auxiliary bishop of Washington D.C., Kevin Farrell lived in the same apartment with DC Cardinal McCarrick for 6 years from 2001-2007. This inconvenient fact poses a serious perception and demographic problem. Being a roommate of the notorious sexual predator, necessarily tarnishes a much needed squeaky clean image.

How close were Farrell and McCarrick? Cardinal McCarrick offered lavish praise on Farrell when he became Bishop of Dallas. McCarrick described his relationship with Farrell accordingly: “He is a good friend and has been a great brother to me. In the past six years, I have had the privilege of knowing and working with Bishop Farrell.” When no skin was in the game, McCarrick was very clear, the two prelates worked together and slept under the same roof together…for six long years!

What kind of esteem does Kevin Farrell hold for his mentor and roomie, Ted McCarrick?

Despite his shrugged shoulders in the video, the true and indelible answer to that question resides in Kevin Farrell’s unique and self-designed bishopric Coat of Arms. Farrell chose and designed a symbolic homage and distinct tribute to Cardinal McCarrick. He admired Ted McCarrick to such an extent that he crafted a coat of arms around Uncle Teddy’s own coat of arms. Farrell chose the lion rampant in the coat of arms “to honor Theodore Cardinal McCarrick, Archbishop emeritus of Washington.” Is this a case of art imitating life?

This notorious scenario poses a very sticky wicket for Pope Francis’ personal appointment of Kevin Farrell as Cardinal and as the prestigious Prefect of the laity and family dicastery to lead the upcoming Synod on the Young People.

Even the dull-witted Vatican press office senses that some distance is needed between the two former roommates, Farrell and McCarrick. Clearly, Farrell received the USCCB press office memo reminding all prelates to say that they were “shocked” by the McCarrick sex molestation allegations.

As we have seen in the last 5 years of this pontificate, the Vatican is fond of short slick videos to promote its latest globalist agenda. So, the Vatican quickly arranged a video defense for Cardinal Farrell. In the 1:29 video, Farrell asserts that he, too, is “shocked and overwhelmed” by the McCarrick sexual abuse allegations. It went downhill from there.

Any forensic linguist and body language expert could easily debunk his protestations as self-serving and damning. If this is the Vatican’s idea of refuting the claims of Farrell and McCarrick’s close relationship, it’s about as persuasive as global warming is Magisterium.

After watching this video, aren’t you perplexed that Farrell submitted to this sit down with the camera? His fractured speech and rambling phrases are void of any veracity, rational thought or persuasion. Farrell hems and haws and couldn’t articulate any fully organized arguments. His pitiful performance fails miserably even under these most benign and non confrontational conditions.

Watch the video very carefully. In the span of one and half minutes, Farrell mentions “I” ten times, which only underscores the self serving purpose of the video. Farrell sputters irrelevant tangents, such as working at the chancery and never knowing McCarrick until he came to D.C., as feeble arguments for his lack of knowledge about McCarrick’s indiscretions. Not surprisingly, Farrell never mentions about living under the same roof as McCarrick for 6 years.

The only sentence that Farrell managed to sputter out sounds strangely like self incrimination. At :58 near the end of the video clip, Farrell says, “I was heavily involved in Washington, in the whole, from 2000, on sex abuse.” Really? That sounds like a slip of the tongue, an admission of guilt.

Farrell’s ‘defense video’ serves as Exhibit #1 for the cover up. More importantly, Pope Francis owns this scandal from start to finish. Farrell and McCarrick are his close clerical cohorts. The Vatican thought the video would end this scandal. They didn’t anticipate that Farrell’s very own words indict him. Farrell should be immediately demoted and banished from ministry.

If you have any doubt, just check out the YouTube comments.

_______________
Elizabeth Yore is a child protection attorney who has investigated many clergy sex abuse cases.

[Comment Guidelines - Click to view]
The Remnant values the comments and input of our visitors. It’s no secret, however, that trolls exist, and trolls can do a lot of damage to a brand. Therefore, our comments are heavily monitored 24/7 by Remnant moderators around the country.  They have been instructed to remove demeaning, hostile, needlessly combative, racist, Christophobic comments, and streams not related to the storyline. Multiple comments from one person under a story are also discouraged. Capitalized sentences or comments will be removed (Internet shouting).
The Remnant comments sections are not designed for frequent personal blogging, on-going debates or theological or other disputes between commenters. Please understand that we pay our writers to defend The Remnant’s editorial positions. We thus acknowledge no moral obligation whatsoever to allow anyone and everyone to try to undermine our editorial policy and create a general nuisance on our website.  Therefore, Remnant moderators reserve the right to edit or remove comments, and comments do not necessarily represent the views of The Remnant.
back to top
Last modified on Thursday, July 26, 2018
Tweet

More in this category: « Things to Do in an Emergency: “What’s Your Trade?” Bracing for the Reign of Saturn: The Real ‘New Order of the Ages’ »