Francis is Using the Communists, Not the Other Way Around Featured 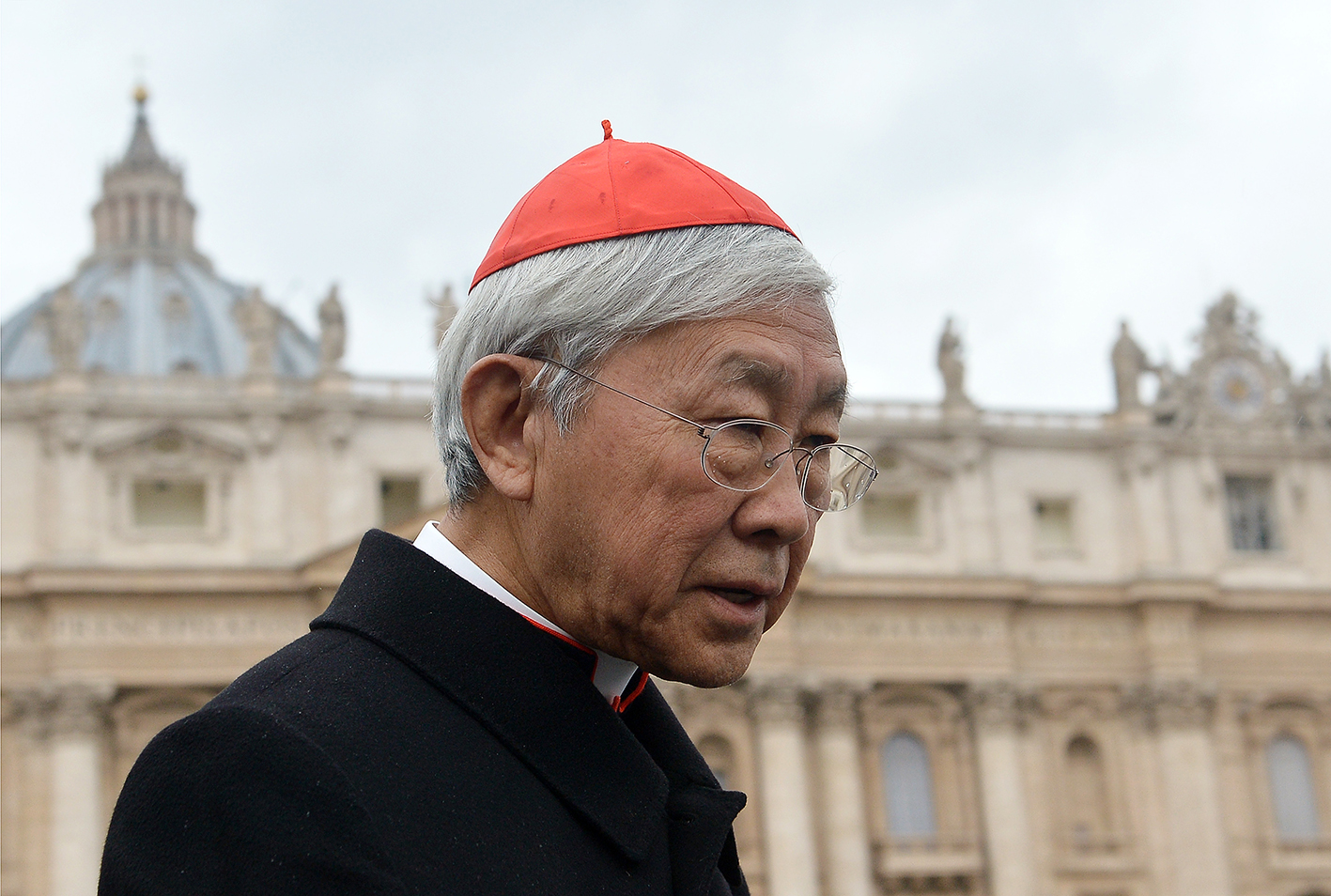 When Jorge Mario Bergoglio was elected supreme pontiff in March of 2013, the world seemed to expect a softening of Pope Benedict XVI’s crystalline, intellectual style. At first, the new Pope Francis’ many gaffes and faux pas seemed part of this more relaxed approach to the papacy. I and many others pigeonholed Francis as a theological and mental featherweight, an affable simpleton whose papacy would be much more about embracing children and washing the feet of the faithful, and much less about issuing encyclicals and wading into the debate arena with the secularist academics.

But as time went on, a pattern emerged. Francis was not the smiling dunce that he appeared to be. He was, and remains, a coldly calculating man, who uses his so-called “slips of the tongue” to befuddle the conservative opposition within the Vatican and undermine any attempt to rein him in. Francis is no fool. He is Machiavellian, and he has been running circles around us for five years.

And who is this “dictator pope,” what does he want? It should be clear by now that Bergoglio is an arch Modernist, that is to say, a heresiarch who seems to hold no Catholic dogma sacred. To Francis, everything is fair game. He upends everything, glibly remarking that “time is bigger than space”. (Translation: I will make the mess, but somebody else will have to clean it up.) But Francis is not a bull in a china shop; he is a sniper with a powerful scope. One by one, he is picking off his targets. Traditional marriage, blasted away with a tiny footnote in a poorly-written document. Unmistakable teaching against sodomy, laid low by five little words uttered seemingly absent-mindedly on an airplane. The Council of Trent, murdered by a postage stamp. Even Hell, it now seems, has been shot out of the dogmatic picture. The list goes on and on and on. Francis is not a buffoon pottering about breaking things in the chapel. He is systematically destroying whatever is left of the Church that Christ founded. He is, in a word, Modernism exemplified.

This article appears in the last Print/E-edition of The Remnant. Subscribe today to see all you're missing!

Of all Bergoglio’s outrages against the Magisterium, none so neatly illustrates his plan to end Catholicism as his ongoing, slow-motion pas de deux with the Chinese Communist Party. How can Pope Francis be so naïve? we read time and again. Doesn’t he know what the Communists are capable of? Doesn’t he remember Cardinal Mindszenty, Fr. Walter Ciszek, Patriarch Tikhon, the Spanish Civil War, Vietnam? Of course he does. The deal being hammered out between Beijing and the Vatican is not a foolhardy attempt by an open-handed pontiff to save the Church in China—it is a move to end it.

It is not hyperbole to say that, even including the early Christians, few have suffered for the Faith as have the faithful in China. My sources inside the People’s Republic tell me of disappeared bishops, arrested parishioners, confiscated church buildings, houndings by the police, surveillance, intimidation, and character assassination. But one hardly needs to resort to espionage to know what the Chinese government does to Catholics, or to anyone who dissents from the party line. Chen Guangcheng, the blind Chinese lawyer who was forced into exile for trying to get the Chinese government to stop performing brutal ninth-month forced abortions on women who had violated the “one-child policy,” says from his new home in the United States that Francis should never sign the deal that is on the table. Joseph Cardinal Zen Ze-kiun, the Hero of Hong Kong who has repeatedly taken to the public square to defy Beijing’s designs on one of the last outposts of relative freedom in continental Asia, has urged Francis to stop negotiating with the Communist authorities. Websites in the US and Europe are now thronged with articles and essays pleading with the Vatican to fight against Beijing, and not to capitulate to it. Steven Mosher, the China expert who runs the pro-life Population Research Institute, has been saying for decades that China is the worst offender against the Catholic Faith, and against basic human dignity, on the planet.

But things look different to Bergoglio. He has no use for such sound council. What is precisely galling about the Chinese Catholics is that they are Catholic. The Catholics who stayed with the legitimate, underground Church—and did not go over to the sham church with “clergy” appointed by the Communist Party—have kept the Faith. They are true believers. They frequently meet martyrdom for their fidelity. Francis wants to cut this out root and branch.

What does he want instead? What do all Modernists want? Francis wants to put a stop to revealed religion and make the Church an adjunct to the state. He is a garden-variety globalist who thinks One World Government will finally solve the problems of mankind. (Globalist Extraordinaire and high priest of the abortion lobby Jeffrey Sachs has been Francis’ frequent guest at the Vatican, often headlining events with the Holy Father and even hosting them from time to time.) When Francis’ lieutenant, Vatican bishop Marcelo Sánchez Sorondo, said that China was “best implementing the social doctrine of the Church,” he wasn’t kidding. And he wasn’t alone. Francis—who said nothing in public to rebuke or even to contradict Sorondo—agrees with him completely. 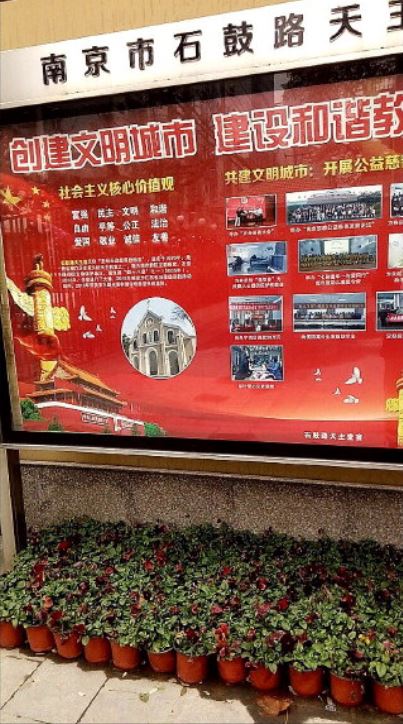 The above picture was taken recently at a sham-Catholic, “official, government-approved” church in Nanjing. The sign in front of the church touts the patriotic activities going on there, including building “core socialist values” and inculcating “patriotism”. There is no mention of Jesus or the sacraments, but the stone pillar at the bottom center is a bangmu, in this case the huabiao totem standing in front of the Gate of Heavenly Peace in Beijing. (The same Gate of Heavenly Peace where the “People’s Liberation Army” opened fire with machine guns and tanks into a crowd of unarmed civilians in 1989.)

It represents the power of the emperor, traditionally known in China as the “son of heaven,” and, by extension, the power of the state. The symbolism is perverse and entirely intentional. The Cross of Christ, where hopes of a political messiah (should have) died forever, is replaced with a cross-like totem to apotheosized statecraft. Just as Francis has turned the Vatican into an adjunct of the radically anti-human environmentalist fringe movement, and has reliably weighed in on the Marxist side of every political debate he enters, he wants to expand the Church-as-handmaiden-to-world-socialism franchise into China, which openly carries on that Leninist tradition in the twenty-first century.

This time, the deal comes with direct insults and blasphemies against Our Lord. Socialist trampling of religion, but with Chinese characteristics.

Just twenty years ago, it seemed that Communism was finally gasping its last. Now, a dozen winters after the death of the pope who dedicated his pontificate to fighting murderous collectivism, his successor once removed is prepared to give it his blessing.

Published in Remnant Articles
[Comment Guidelines - Click to view]
The Remnant values the comments and input of our visitors. It’s no secret, however, that trolls exist, and trolls can do a lot of damage to a brand. Therefore, our comments are heavily monitored 24/7 by Remnant moderators around the country.  They have been instructed to remove demeaning, hostile, needlessly combative, racist, Christophobic comments, and streams not related to the storyline. Multiple comments from one person under a story are also discouraged. Capitalized sentences or comments will be removed (Internet shouting).
The Remnant comments sections are not designed for frequent personal blogging, on-going debates or theological or other disputes between commenters. Please understand that we pay our writers to defend The Remnant’s editorial positions. We thus acknowledge no moral obligation whatsoever to allow anyone and everyone to try to undermine our editorial policy and create a general nuisance on our website.  Therefore, Remnant moderators reserve the right to edit or remove comments, and comments do not necessarily represent the views of The Remnant.
back to top
Last modified on Tuesday, April 17, 2018
Tweet
More in this category: « Zeno's Papacy and the Sherlock Holmes Axiom Pope Francis: A Pelagian Lutheran »