The Broward County School Shooting and Our Post-Christian Society 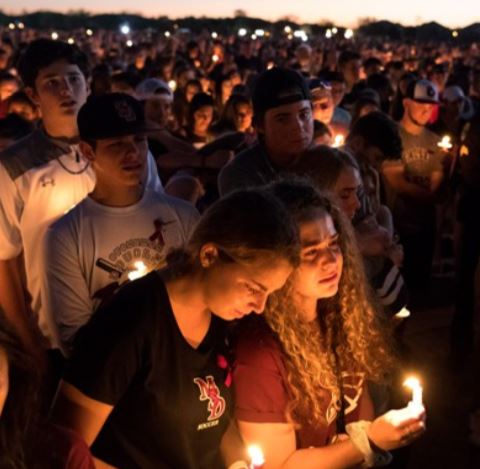 It seems on an average we hear about a mass shooting or attempted shooting every couple of months—and those are just the significant attempts, the ones reported by the news media. There are other, countless accounts of individuals bringing weapons to school or to the workplace, showing them off, and threatening classmates and co-workers: incidents which don’t make the national news and elicit little surprise from a calloused citizenry who now seem to react to such events as if they are normal, part of everyday life, to be expected in our society.

The school shooting in Broward County, Florida, on February 14, was a horrendous act, a massacre committed by a criminal youth who rightly deserves the most severe penalty the state can mete out. Our prayers and sympathy must go out to the parents and relatives of those seventeen people, mostly students, who were senselessly cut down. The pain and anguish, the questioning without answers, the anger, will go on without end, for that is how such events affect us.

Yet all the screams and pleas for redress and for political solutions mask much larger and more fundamental issues and questions within our society and culture.

Each time such an event occurs in a school, whether in Sandy Hook or in Broward County, the demand from Progressives and the Leftwing media is for more gun control, limiting possession of firearms, as if taking away one instrument for potential violence will somehow forestall or stop a violent person. It won’t and it doesn’t. Guns are inanimate objects that must be used, employed for a purpose. A gun doesn’t kill by itself, without an operator who aims and fires it. An unhinged person—a disaffected student intent on mayhem or revenge, or intent on expiating his own internal demons—may use a gun to do so; but if there is no gun (and potential criminals will always find one, illegally, if necessary), then a knife, or homemade bomb (easily constructed using Internet instructions), or poison, or some other means will always be at hand and easily available.

Chicago, Illinois, has one of the nation’s highest—if not the highest—murder rates; yet it also has some of the strictest laws inhibiting gun ownership. There is a thriving black market for weaponry to be used in crime, and no gun control advocate putting a leaky bandage on the problem will succeed where a social, familial and religious breakdown has taken place. And that is what has happened not only in Chicago, but in some of the “best” neighborhoods and well-off communities in America.

Our problem—the problem of America in 2018—is not that we have over 300 million guns; our problem is not “a history of violence and a ‘wild-west’ approach to settling our differences.”

Can you recall or name one—just one—instance of a school massacre from the 1950s? There weren’t any. Indeed, when I went to elementary school, all the doors were open and accessible. Anyone, basically, could walk in—anyone could have entered and threatened or attacked us. But the simple fact is: no one did. We did not have police patrolling the hallways; we did not have metal detectors; we did not have “grief counsellors” (because we did not need them).

Back then almost all schoolchildren, white and black, came from two parent families. Despite poverty, which wasn’t restricted by race, the family was central to all education, and the role of our public schools was, rightly, considered as an extension of the natural educative duties of the family, and not so much of the state (although an acute observer could see what was occurring). And the curriculum, in spite of newer trends, still harked back to fundamentals—reading, writing, arithmetic, proficiency in trades, ability to communicate. Not all students were capable of college; indeed, a solid high school education with good pre-professional preparation was oftentimes a surer guide to later success.

Before the advent of a multiplicity of cable and satellite offerings, television offered a choice of three, perhaps four channels each night. Students and their families grew up watching, when permitted, programs like “Life is Worth Living” (with Bishop Fulton Sheen), “Father Knows Best,” “My Three Sons,” “Gunsmoke,” “To Tell the Truth,” “The Bell Telephone Hour,” and “I Love Lucy”: programs to amuse and entertain, to elevate the mind, and also, on occasion, emphasize the importance of doing right and avoiding wrong. There was, so to put it, a more or less agreed-upon standard or idea of national decency, a kind of “public orthodoxy” which prevailed generally. And in large degree it derived from the nation’s heritage and inherited religious faith which despite a major depression, social dislocation and two world wars, still obtained.

But we were, as it were, sitting on a volcano, a volcano that erupted in the late 1960s and which has continued until our days. Since then we have witnessed the virtual triumph of cultural Progressivism and, increasingly, what we term “cultural Marxism.” Touted as “liberation” from old-fashioned and no-longer-applicable or valid rules and religious taboos, especially sexual, and demanding the destruction of what it identifies as “structural racism” and the implementation of a rigid (but deceptively false and ideological) “equality” between the sexes, this Progressivism dominates our schools and colleges, perverts the teaching of the Church, infects our entertainment (especially Hollywood, but also our sports), and imposes its latest poisonous dogmatism on us all via the media—always advancing, always more extreme, always more intolerant of any dissent or demurer.

No politician who wishes a favorable press or his coffers filled with campaign lucre will oppose it. No prominent figure will stand and demand that our wretched public schools, for example, be cleared out and fumigated (or as my friend Dr. Clyde Wilson suggests, napalmed), for the health and spiritual safety of the children imprisoned therein. Throw more taxpayer money at them, that is what we hear loudly proclaimed; when our efforts and attention should be—must be—towards privatizing the public schools, widely encouraging school choice, with special attention to those institutions that offer a real education framed in those traditions and values and faith that once helped create a great nation.

But, in reality, none of this will ultimately be successful until we—let me put this way—“get our country back.” And to get our country back, we will need to get our lives “back,” to recover those religious beliefs, those standards and familial values that our ancestors so cherished. The foul Progressivist genie is out of the lamp and rampaging across the land. Nothing short of a major religious conversion—or a civil war—will put it back in.

Conversion, you say? Well, yes, it is possible, and we have actually seen a massive religious rebirth in, of all places, post-Communist Russia, where since 1991 over 28,000 new Christian churches have been built and opened their doors, and churches are filled with—young—communicants. In the latest polling over 80% of Russians now consider themselves to be “strong believers.”  Is this because after seventy years of oppressive and ruthless Communism, Russians have now re-discovered the religious faith of their history and tradition? That they understand the importance of faith that was suppressed for so long?

What, indeed, would it take for millions of Americans to understand that no just and reasonable society can continue to exist without a commitment to the historic belief that cradles it, gives it life as well as rules to live by, that protects and shields its citizens from evil and destructive tendencies?

Cries and demands for gun control and for banning certain guns are not only deceptive and ineffective band aids, they violate our constitutional rights. “Normal people,” citizens annealed in the traditions and culture passed on to us by our ancestors, citizens who have inherited and incorporated into their lives the faith and laws of God and of Nature, understand this.

Cries and demands for gun control only confuse and cloud the real issues at stake here. The solutions lie, first, within each of us, in our family life, in our faith and in our churches. And then, working with other likeminded citizens, in taking back our country.

It may seem like an impossible task; it certainly is painful and difficult. But the alternative is far worse.

[Comment Guidelines - Click to view]
The Remnant values the comments and input of our visitors. It’s no secret, however, that trolls exist, and trolls can do a lot of damage to a brand. Therefore, our comments are heavily monitored 24/7 by Remnant moderators around the country.  They have been instructed to remove demeaning, hostile, needlessly combative, racist, Christophobic comments, and streams not related to the storyline. Multiple comments from one person under a story are also discouraged. Capitalized sentences or comments will be removed (Internet shouting).
The Remnant comments sections are not designed for frequent personal blogging, on-going debates or theological or other disputes between commenters. Please understand that we pay our writers to defend The Remnant’s editorial positions. We thus acknowledge no moral obligation whatsoever to allow anyone and everyone to try to undermine our editorial policy and create a general nuisance on our website.  Therefore, Remnant moderators reserve the right to edit or remove comments, and comments do not necessarily represent the views of The Remnant.
back to top
Last modified on Friday, February 16, 2018
Tweet