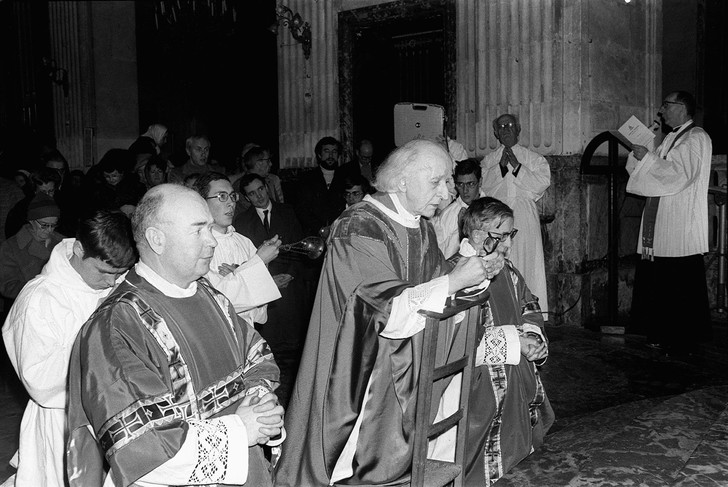 Father Ducaud-Bourget (center), accompanied by a thousand traditionalists, occupied the Church of Saint-Nicolas-du-Chardonnet in Paris back in 1977... and never left.

REMNANT EDITOR’S NOTE: Each year before the beginning of the Chartres Pilgrimage (which kicks off in Notre-Dame-de-Paris, just around the corner from Saint Nicholas), we make a point to lead our pilgrims to this beautiful old Church, which now has a much-venerated bust of the late, great Archbishop Marcel Lefebvre at the rear. We pray that the spirit of the Archbishop and the saintly Monsignor Ducaud-Bourget will never be forgotten, and that the story of their courageous stand for the Old Faith will be told and retold to our children for many generations to come—at least until this Modernist nightmare is no more. MJM

A single tap of a priest’s knuckle upon the blackened mahogany arm of a choir chair signals the morning’s recitation of the Divine Office. The Roman-collared men gather in the sanctuary of Saint-Nicolas-du-Chardonnet de Paris and raise the breviaries they hold in their hands and flip through the thin pages until each finds the day’s prayers.

“Deus, in adjutórium meum inténde,” (O God, come to my assistance), the church’s pastor, seated on the Gospel side of the altar, chants in a rich voice.

From the Epistle side, four priests respond, “Dómine, ad adjuvándum me festína,” (O Lord, make haste to help me). Their prayers rise. In the nave, a dozen or so parishioners — some kneeling, others sitting — assist with their own prayers, in silence.

For the next fifteen minutes, the men, wearing ankle-length, death-black cassocks, appeal to God. They stand. They bow at the waist. They bow their heads. They cross themselves in pious affirmations, as the first rays from the morning’s sun seeps through the stained-glass depiction of the Crucifixion, two stories overhead.

Although Catholic churches held rites like these for centuries, Saint-Nicolas-du-Chardonnet is no ordinary church.

Freed from the diocesan bishop’s strangulating jurisdiction of the post-Second Vatican Council’s “new-and-improved” Roman Catholic Church, Saint Nicolas, located at 23 rue des Bernardins, is one of a few churches in the secular Paris that regularly and exclusively offers the traditional Latin-rite Mass.

In Paris at that time, there was one old priest who clung to the Tridentine Mass of Pope Saint Pius V (1504-72), codified on July 14, 1570, following the Council of Trent (1545-63). The old religious Frenchman refused to go along with the progressives, the priests who experimented with innovations tossed into the Novus Ordo Missae (the New Order of the Mass).

That man was Monsignor François Ducaud-Bourget (1897-1984), ordained in 1934. A bit on the short side, he stood slightly hunched over, with a sharp nose that protruded from the center of his small face flanked by long tufts of white hair covering his ears.

At times he pointed his finger – crooked with rheumatoid arthritis – through the air to emphasize certain points in his sermons, always delivered with traditional instruction on morals and doctrine. He never went the way of the post-Vatican II folksy style of the self-reflective, feel-good homily commonly punctuated with jokes to keep the parishioners happy — and awake. He wouldn’t degrade himself, or his office, in that way.

Even though Pope Paul VI (1897-1978) had signed the Apostolic Constitution Missale Romanum on April 3, 1969, thereby handing the Church a reformed Missal, Monsignor Ducaud-Bourget disdained the man-centered modernizations. He continued with his back to parishioners, to face the altar and to pray the ancient rite.

As those before him, he began Mass with Psalm 42, a preparation for the unbloody sacrifice of Calvary, and ended with the emotionally inspiring Last Gospel, even though both had been ordered out of the Mass by the progressives.

Best described as a priest forced out of the diocese, in the ’70s Monsignor Ducaud-Bourget rented meeting places where he could offer the Latin Mass for those attached to the tradition. Regularly, he paid for a room on Sundays in the La Salle Wagram, a banquet hall near the Arc de Triomphe.

One Sunday, February 27, 1977, he rented a room in Maubert Mutalité Lecture Hall, a building very near Saint-Nicolas-du-Chardonnet. The monsignor had a plan.

This article appeared in the Print Edition of The Remnant some weeks ago. Find out what else you missed!

Saint Nicolas suffered greatly from the chronic Novus Ordo syndrome: spiritual neglect. From 1968 to 1977, diocesan priests from the parish church, Saint Severin, located a few blocks away, only opened the doors of Saint Nicolas for a single new Mass once a week.

As usual, only a handful of parishioners bothered to show up for the Mass, which was interrupted when more than 1,000 parishioners, who met at Mutalité that Sunday, quietly filled the seats. And then the old priest entered with a procession, hoping to inject some supernatural powers of Jesus, Mary and Joseph back into the church, thereby inoculating it against the fatalistic forces of humanistic relativism. He had no idea how successful he would be.

There was only one problem: The occupation was illegal.

Even though the diocesan bishop of Paris was deemed the caretaker for the property at the time, it was (and still is) the state of France that owns every church built in that nation before 1905.

In 1905, the Law of Separation of the Churches and the State (Loi de Séparation des Eglises et de L’Etat) made it official that the state of France no longer recognized the Roman Catholic Church, but only distinct associations cultuelles (associations for worship), ordered established in each parish. Where no associations formed, the state declared it would take possession of the church property.

From his seat in the Vatican, Pope Pius X (1835-1914) looked toward France and feared spiritual demoralization: state intervention in religious parish life. To take a firm stance against the meddling modernists, the Vicar of Christ, in his 1906 encyclical “Gravissimo oficii,” forbade the formation of any associations cultuelles.

“Police entered the churches with guns. They opened the tabernacles. They forced out of the churches and onto the street the priests and nuns,” Father Gaudray described.

Everything the Church had gained with the Concordat of 1801, it lost in 1905. Not only had the 19th-century agreement between Napoleon Bonaparte (1769-1821) and Pope Pius VII (1742-1823) officially raised the recognition of Catholicism as the religion of the majority of French citizens, but it also stipulated that the state would financially support the clergy, which it did.

Although more than one hundred years ago the Church lost its spot in France’s secular pecking order, it wasn’t a total failure, exactly. For when the state took custody of church property, at least it allowed bishops to remain in charge of the churches. With one single stipulation: In every church, one Mass was to be said each year. If not, the state would retake control of the sacred structure and do with it what it wanted.

“So, Saint Nicolas was part of the diocese of Paris, and the bishop of Paris was in charge of the building, but the state did own it,” Father Gaudray clarified. “Monsignor Ducaud-Bourget took the church against the will of the bishop, which was illegal. Taking over a church, to enter a church and to take over, it is illegal.”

The state did decide to take legal action, but only after Monsignor Ducaud-Bourget and his army of Church Militants had entrenched themselves deep in their sacred battlefield. For even on the first night after the monsignor and the others entered Saint Nicolas, they had adoration of the Blessed Sacrament, which lasted for the entire first week.

What could officials do against a bunch of pacifist worshipers?

The police could do nothing, because the people prayed.

Every Sunday, the monsignor had 5,000 faithful Catholics in Saint Nicolas, and if they had been forced to leave the church, they would have simply gone to another and taken over that one. Officials understood it would be the same problem, so they understood it was best to keep silent about the takeover and decided to do nothing, to leave the traditionalists there.

And even if the diocese wanted to take back Saint Nicolas, on principle, it wouldn’t work. The diocese wouldn’t be able to occupy all the churches. They don’t have enough faithful who attend Mass. Although a reported 85 percent of the 67 million French claim to be Roman Catholic, it is uncertain how many regularly attend Mass on Sunday.

For a time, Monsignor Ducaud-Bourget took care of the church, but he was already old. Desperate to continue the traditional efforts he resurrected in Saint Nicolas, he sought help from one of the most vociferous defenders of the Tridentine Mass: Archbishop Marcel Lefebvre (1905-91, Congregation of the Holy Ghost). In 1969, he founded the Society of Saint Pius X, an order dedicated to the training of priests in the rites of the ancient Church, pre-Second Vatican Council. The Archbishop aided the Monsignor and dispatched one of the Society’s priests to help the elderly man.

And the Monsignor’s occupation of Saint Nicolas continued, even after his death, in 1984, for subsequently, his body was interred in the ambulatory behind the main altar, where he had offered the old Mass every day in the last years of his life. After the old priest’s death, Archbishop Lefebvre sent two more priests from the Society to the Parisian church. Monsignor Ducaud-Bourget’s dream would not die with him.

It’s now 2017, 40 years after the takeover. Traditionalists continue to occupy Saint Nicolas, and the traditional priests continue the ancient rites of the one, holy, catholic, apostolic Church.

Still, every morning, a single tap of a priest’s knuckle upon the blackened mahogany arm of a choir chair signals the morning’s recitation of the Divine Office.

The Roman-collared men gather in the sanctuary of Saint Nicolas du Chardonnet de Paris raise the breviaries they hold in their hands and flip through the thin pages until each finds the day’s prayers.

Theresa Marie Moreau is the author of “Blood of the Martyrs: Trappist Monks in Communist China,” “Misery & Virtue” and “An Unbelievable Life: 29 Years in Laogai,” which can be found online and at TheresaMarieMoreau.com.

Published in Remnant Articles
[Comment Guidelines - Click to view]
The Remnant values the comments and input of our visitors. It’s no secret, however, that trolls exist, and trolls can do a lot of damage to a brand. Therefore, our comments are heavily monitored 24/7 by Remnant moderators around the country.  They have been instructed to remove demeaning, hostile, needlessly combative, racist, Christophobic comments, and streams not related to the storyline. Multiple comments from one person under a story are also discouraged. Capitalized sentences or comments will be removed (Internet shouting).
The Remnant comments sections are not designed for frequent personal blogging, on-going debates or theological or other disputes between commenters. Please understand that we pay our writers to defend The Remnant’s editorial positions. We thus acknowledge no moral obligation whatsoever to allow anyone and everyone to try to undermine our editorial policy and create a general nuisance on our website.  Therefore, Remnant moderators reserve the right to edit or remove comments, and comments do not necessarily represent the views of The Remnant.
back to top
Last modified on Wednesday, September 20, 2017
Tweet
More in this category: « Bishop Barron's SILENCE The Revolution, George Soros, and the Assault on the West »