Written by  The Remnant Newspaper
Rate this item
(49 votes) 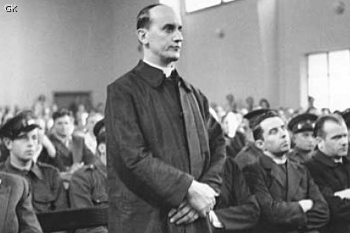 - Hailed by Pope Pius XII as the "most important priest in the Catholic Church."
- Beatified by Pope John Paul II
- So hated by the Nazis that they demanded Pope Pius XII remove him (Pius refused)
- Imprisoned by the Communists
- Laid down his life for those most persecuted during and after World War II
- Died of complications from his imprisonment for defending the rights of Christ the King
- Denounced Martin Luther as a "False Prophet"
- Blamed Protestantism for the “hell in which human society suffers today”
- Would not have made a very good ecumenist.
- Would have been excommunicated from the 'Church of Accompaniment'

History always balances its accounts. For years the Communists endeavored to separate Croatian Catholics from the Pope. They used all means to sever Church unity: vain pledges and threats; bribery and murder; trickery and torture.

The focal point in that artificial conglomeration of Yugoslavia and other satellite countries to Moscow - was identical: the communist notion of the state must not allow the existence of any “alien powers” on its territory (not even the Catholic Church). What disturbed the communist dream most were the tight ties of local churches with the Pope in Rome.

Enter Archbishop Aloysius Stepinac of Zagreb: a man who railed against the government for interfering in a Church which answered only to Peter’s Successor.

In Tito's Yugoslavia, that Yugoslavia where communism had a “human face”, Archbishop Stepinac was arrested, sentenced during a shameful mock trial, imprisoned and detained until his death—all because his response to those communist efforts was a firm "No!" He said "no" to attractive proposals, and then confirmed his "no" when faced with force.

“My conscience is clear and calm. If you will not give me the right, history will give me that right,” he said during that deplorable trial.

It was the victory of history that was witnessed on Saturday, October 3, 1998, when St. Peter's Successor beatified the Croatian who had been ready to give his life as witness to the rights of Catholics both in Croatia and abroad.

Aloysius Stepinac came from a peasant family, born in Brezani near Krasic on May 8, 1898. He was the eighth of twelve children, and his mother always prayed that he might one day become a priest. Her spirited boy, however, was prevented from doing so right away. In 1916 Stepinac was conscripted into the Austro-Hungarian army and fought on the Italian front until he was taken prisoner. In 1919 he was released and returned to civilian life, but put off the priesthood in order to study agriculture at the University of Zagreb. It was not until six years later that Stepinac decided to become a priest and went to Rome to study. He was ordained six years later on October 26, 1930.

He returned to Zagreb in July, 1931, with the degrees of Doctor of Theology and Philosophy, and became secretary to Archbishop Antun Bauer of Zagreb. Soon afterward he was nominated as coadjutor to the Archbishop. After this nomination, Stepinac stated: “I love my Croatian people and for their benefit I am ready to give everything, as well as I am ready to give everything for the Catholic Church.” In response to the many messages of support, Stepinac “was sincerely thankful for all the congratulations,” but said that he was not enthusiastic about the appointment because it was too heavy a cross for him. The Lord had an even greater cross in mind, however, and after Bauer's death on December 7, 1937, Stepinac became the Archbishop of Zagreb. His Bishop's motto was: In te, Domine, spe-ravi (In you, Lord, I place my trust).

This article appeared back in 2016 as part of The Remnant's Print/E-edition series, "Catholic Heroes." To catch future installments, subscribe to The Remnant today.

As Archbishop, Stepinac was an extremely outspoken defender of the Catholic Faith. He especially criticized Protestantism, stating in a speech in 1938 that “the Catholic Church was the greatest civilizing force in human history,” and railed against those who wanted to deprive the Catholic Church of any influence in public life. He referred to the Reformation as the “Deformation”, and denounced Luther as a false prophet who “demolished the principles of legal authority given by the Lord.” He went on to blame Protestantism for the “hell in which human society suffers today,” and said that it had opened the road to “anarchy in all forms of human life.”

During World War II, he tirelessly dedicated himself to human rights, both civil and religious, primarily in the Kingdom of Yugoslavia and then particularly in the Independent State of Croatia. Despite the Nazi occupation he was not afraid to publicly and courageously defend the rights of the persecuted. His door was always open not only to Croatians, but also Jews, Serbs and Slovenes that needed his help. The Archbishop desired most of all that Croatia remain a country of God.

In May of 1943, he openly criticized the Nazis, and as a result the Germans and Italians demanded that he be removed from office. Pope Pius XII refused, but warned Stepinac that his life was in danger. In July of 1943, the BBC and the Voice of America began to broadcast Stepinac's sermons to occupied Europe, and the BBC commented on Stepinac's criticism of the Ustasha regime.

(Interesting footage of the trial. Though not in English, the sensus Catholicus of the Cardinal is hard to miss.)

He was a marked man; on May 17, 1945, nine days after the Communists came to power, he was arrested. Two weeks later, however, he was released and carried on as before, until an assassination attempt in November of that year compelled him to cease his pastoral visits outside of Zagreb.

The war itself finally came to an end, but Stepinac’s devotion to Truth and humanity had made powerful enemies. Early one September morning, as the Archbishop vested for Mass, he was arrested and thrown into prison to await trial. The trial, which began on September 30, 1946, was later determined to have been a shameful fabrication, but at the time its legitimacy was not challenged. He was "found guilty" of Nazi collaboration, and was convicted on October 11, 1946; sentenced to sixteen years’ imprisonment and the loss of all civil and political rights for five years. From prison he continued to thunder against manipulation of the church by the state. He spent the first five years in the prison of Lepoglava, and in 1951, Tito's government released him as a precondition for American aid, but confined him to the village of Krasic.

Even though he was forbidden by the government to resume his duties, Stepinac was named Cardinal by Pope Pius XII on January 12, 1953. That same year, Stepinac was diagnosed with polycythemia, a rare blood disorder involving the excess of red blood cells, causing him to joke, “I am suffering from an excess of reds.”

On February 10, 1960, at the age of 61, Stepinac died of thrombosis. Since the disease was brought on by complications from illnesses endured while in prison for make-believe crimes, many Catholics call him a martyr. On February 13th, he was buried behind the main altar in the cathedral in Zagreb. Pope Pius XII stated, “This Croatian Cardinal was the most important priest of the Catholic Church.”

In 1985, his trial prosecutor, Jakov Blazevic, publically admitted that Cardinal Stepinac's trial was entirely framed, and that Stepinac was tried only because he refused to sever thousand-year-old ties between Croatians and the Roman Catholic Church. Cardinal Spelman commented that: “The only thing Cardinal Stepinac is guilty of was his love for God and his homeland.”

On October 3, 1998, in Marija Bistrica, Pope John Paul II beatified Cardinal Stepinac, and referred to him as one of the outstanding figures of the Catholic Church. Even Ljubomir Rankovic, Deacon of the Serbian Orthodox Church, supported the beatification: “I, as a person and a priest, wish to express my admiration for this move.” There were also prominent members of the Jewish community who testified to the generosity of aid Stepinac provided during the war.

Without a doubt, Blessed Cardinal Aloysius Stepinac is one of the greatest Croatian patriots of the 20th century.

[Comment Guidelines - Click to view]
The Remnant values the comments and input of our visitors. It’s no secret, however, that trolls exist, and trolls can do a lot of damage to a brand. Therefore, our comments are heavily monitored 24/7 by Remnant moderators around the country.  They have been instructed to remove demeaning, hostile, needlessly combative, racist, Christophobic comments, and streams not related to the storyline. Multiple comments from one person under a story are also discouraged. Capitalized sentences or comments will be removed (Internet shouting).
The Remnant comments sections are not designed for frequent personal blogging, on-going debates or theological or other disputes between commenters. Please understand that we pay our writers to defend The Remnant’s editorial positions. We thus acknowledge no moral obligation whatsoever to allow anyone and everyone to try to undermine our editorial policy and create a general nuisance on our website.  Therefore, Remnant moderators reserve the right to edit or remove comments, and comments do not necessarily represent the views of The Remnant.
back to top
Last modified on Monday, February 6, 2017
Tweet

More in this category: « WHO'S HE TO JUDGE? Bishop Barron & the Church of Accompaniment On Amoris Laetitia: Interview of Vatican Liturgical Consultant and Professor of Theology, Msgr. Nicola Bux »