A Grand Inversion at the Heart of Neo-Catholicism Featured 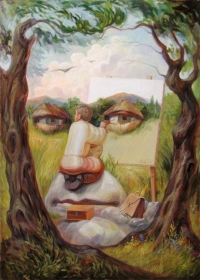 Salvador Dali's The Human Face (Look Again)
I don’t care for the term neo-Catholic, for it is too often used as pejorative.  For this reason, you will not often find the term in my writing, not least for the reason that I was frequently accused of being one.

The term neo-Catholicism actually has a meaning, even if that precise meaning is frequently ignored.  Generally, the term refers to Catholics that take their faith seriously, but generally don’t have a problem with the Church of the last 50 years, even embracing changes that have proven themselves disastrous.


Well, that wasn’t me, not entirely.  Prior to my traddification, I certainly recognized the significant problems in the Church.  Further, I recognized the rupture that occurred during and after the council that gave rise to the neo-Catholic Olympic-level sport of hermeneutical gymnastics.  But even as I recognized these things, it was hard for me to put my finger on the root cause.  As it turns out, to some degree I too was infected by the same virus as many neo-Catholics. However, unsure of the proper diagnosis, my efforts at a self-cure were sometimes helpful and sometimes not.

So it is that I have spent much time pondering the questions of why I was able to see the problems of NuChurch, that I wanted nothing more than to be orthodox and faithful, but spent so much time in unhelpful pursuits.

Have you ever seen one of those images that at first glance seem like one thing, but after some time another image emerges?  I remember one time I saw a knit image in someone’s home that on first glance seemed like a blocky maze pattern.  I saw it several times before I realized that the spaces between the maze walls formed the name JESUS.  Once I saw Jesus in the maze, I couldn’t un-see Jesus in the maze.  From then on it seemed so obvious that it was all I could see when I looked at the image.  I couldn’t see the maze anymore.

In similar fashion, once I realized the true difference between the ways I saw things before and the way I see them now, I cannot un-see it.  In fact, it seems so obvious now; I am chagrined that I missed it before.  As it turns out, there is one simple cause to all the problems that we see in the Church and the promoters of those problems are not shy about telling us about it.

When people ask me about why and how I changed, I tell them about the grand inversion.  It is the one thing that separates otherwise well-meaning neo-Catholics from understanding how they in some ways contribute to the problem.

Several wise traditional commenters have focused on the problem present in Pope Francis’ Evangelii Gaudium #161 "...above all the new commandment, the first and the greatest of the commandments, and the one that best identifies us as Christ’s disciples: ‘This is my commandment, that you love one another as I have loved you’..."

It is easy for Catholics reared on and fed modernist Catholicism to look at the above and not see the problem.  I mean, who is against loving your neighbor?

But contrast it with how Jesus actually answered the question and the problem starts to reveal itself.

Catch Patrick's regular column in the print-edition of The Remnant
As you can see, NuChurch has inverted the order.  First, NuChurch put love of God on a par with love of neighbor, as if they were one command.  Love of neighbor, they would have us believe, is equal to love of God.  But as can be seen from EG161, even that is not enough.  Pope Francis, avoiding Jesus’ direct answer to the question, answers the question with another quote entirely, purposely avoiding love of God, not just as the primary commandment, but dropping it altogether in favor of the love of man.

This simple, but pernicious change is at the heart of NuChurch.  Any Catholic from a century ago would understand that the love of God comes first and that love of neighbor, which derives from the first, is secondary.  But now man is first and the love of God is a secondary to loving man, instead of the other way around.  This is the grand inversion that is at the heart of NuChurch.

But don’t take my word on it.  Listen to Pope Paul VI address this very question in his closing remarks from the Second Vatican Council:


It is right there from the beginning.  This error, this inversion of the Truth of God’s command is at the root of all of it including our man-centered liturgy, false ecumenism, indifferentism, and the false mercy of the current pontificate.  They believe that the only love that matters is the love of man.  Yet the Council of Trent takes a very different approach.


So ingrained has this inversion become in NuChurch, that when a Catholic puts the love of God and his commandments first as he always should, he is derided by no less than the Pope himself as a rigid and unmerciful Pharisee.

But once you see this inversion and understand it for what it is, your entire approach begins to change and your neo-Catholicism can no longer be sustained.

So I saw it.  I don’t how or why, but I saw it. God’s grace is everything. Then what do you do?  Well you try to put God first in every aspect of your life and you try to do the same for the Church by shouting it from the rooftops.  And you fight against the ongoing process of making man the center of our religion.  You fight against a false mercy that rejects the first commandment.  You fight, because you love God.  And only when you love God first, can you truly love your neighbor, even if your neighbor hates you for it. ■

[Comment Guidelines - Click to view]
The Remnant values the comments and input of our visitors. It’s no secret, however, that trolls exist, and trolls can do a lot of damage to a brand. Therefore, our comments are heavily monitored 24/7 by Remnant moderators around the country.  They have been instructed to remove demeaning, hostile, needlessly combative, racist, Christophobic comments, and streams not related to the storyline. Multiple comments from one person under a story are also discouraged. Capitalized sentences or comments will be removed (Internet shouting).
The Remnant comments sections are not designed for frequent personal blogging, on-going debates or theological or other disputes between commenters. Please understand that we pay our writers to defend The Remnant’s editorial positions. We thus acknowledge no moral obligation whatsoever to allow anyone and everyone to try to undermine our editorial policy and create a general nuisance on our website.  Therefore, Remnant moderators reserve the right to edit or remove comments, and comments do not necessarily represent the views of The Remnant.
back to top
Last modified on Saturday, December 12, 2015
Tweet

More in this category: « A Blueprint for Returning to and Restoring Tradition Building A Catholic Alliance: An Urgent Appeal from Michael J. Matt »