Written by  by Megaera Erinyes
Rate this item
(98 votes) 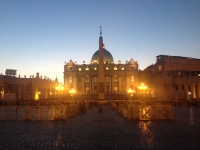 Let’s just pass on from all the debate on what Francis intends and face up to this, and ask some questions about what the concrete effects this change will have on the Church. I am not a prophet and I don’t have any occult scrying device. No crystal ball is needed when one has the basics of the Faith and logic. Let’s see what we come up with.
First, never mind the "Synod can't change doctrine" mantra you've been hearing from all these bishops; that is a red herring. Even Cardinal Kasper has said as much, and, like all good minions of the Evil One, has quoted Scripture right along with his critics to really prove that he knows what he’s talking about. He certainly knows that a proposal to actually abandon the Church’s teachings would go nowhere. It’s why he hasn’t proposed this at all, and neither have his supporters and defenders.

No one is suggesting changing doctrine, so just forget about that. What they're suggesting is much, much more insidious. A change of practice, universally and formally, and just disregarding doctrine. The proposal is simply that doctrine will no longer guide our actions, that it won't matter to the Churchmen, or, shortly after that, to anyone else.

The test for this technique was Humanae Vitae, where doctrine was preserved and practice made it moot. And now both are irrelevant and anyone suggesting that Catholics should not use contraception are freaks, weirdos and “Rad-Trads”. Wherever anyone still remembers that the Church “officially” teaches that contraception is a grave evil, the usual reaction is either indifference or incredulity.

Kasper’s idea is that the Church will “tolerate” that which it “cannot accept”. The Church, he said, could simply say that a “second marriage” is … well… sort of less sacramental, less indissoluble in a supernatural way, but “tolerable” for emotional reasons and if not actually indissoluble in the old fashioned doctrinal way, at least un-breakable, untouchable for practical and emotional reasons. Because now feelings must trump stuffy old abstract and irrelevant doctrine.

Since February there have been any number of expansions and elaborations on the theme but these are mostly irrelevant. Last week, for instance, Kasper said again that the most important thing is that the feelings of the second couple should not be hurt; they would be “offended” if we called their liaison “adultery”. Such language was fine in the time of Christ, but today we are more pastorally sensitive. (The feelings of the abandoned spouse and any children of the first union are left conveniently unmentioned.)

It doesn’t matter. What it boils down to is the point that we must simply put doctrine aside. We can keep it, of course! Perhaps enshrine it in a little reliquary. Put it on the shelf in the nice glass-fronted cabinet where people who like old things can admire it from afar, like an antique tea set inherited from great-grandma, but too precious and fragile to ever use.

No no no! Such posh and fancy things are not for those regular, smelly sheep-people who are the new focus of the Church! Those who live on the “peripheries” can’t be expected to bother with such fripperies as fancy and fragile doctrine anyway, yes? Instead, for our common, daily use, we have the cheap, chipped, second-hand coffee mug stamped with the slogan “Feelings rule!” Not that nice, not pretty or “indissoluble,” not technically “sacramental,” not even that clean, but functional and useful.

But what will happen? Many Catholics are making the mistake of thinking this is an attack on marriage. No. This is an assault on the very foundations of the Faith itself: the Eucharist and the priesthood.

Once this principle is in place, that doctrine is irrelevant and practice can be whatever thewinds of the world, or fashion or feelings or personal preference dictate, absolutely nothing in the Church is safe. It will first destroy the priesthood, and then end the Eucharistic belief of the Church. After that, we know that nothing will survive. Not the teachings on the sanctity of life, the Marian dogmas, popular piety or devotions or any of the practices, traditions, doctrines or dogmas that form the deposit of the Faith itself.

The priesthood would be the first relic of the old Faith to be effectively destroyed. A decision to allow divorced and civilly "remarried" Catholics to receive Holy Communion would, for example, logically spell the end of the return to orthodoxy among young priests and seminarians that has grown so much a feature of Catholic life in recent decades.

What has been the most outstanding characteristic of this new breed of orthodox priest? Why, reverence for the Holy Eucharist of course. It has been noted many times that the practice of Eucharistic Adoration has surged in all the most orthodox dioceses since John Paul’s time. Many have said that this practice has resulted in huge increases in good, solid vocations. And none of those men will be willing to commit the sacrilegious act of allowing public unrepentant adulterers to receive the Body and Blood of Christ. Therefore, these priests who are the least bit unwilling, the tiniest bit hesitant to go along with the new orders could not possibly be allowed to carry on in ministry.

Even for parishes to have different Masses would be unacceptable; the idea of a separate Mass for unrepentant public adulterers would be as offensive as refusing Communion in the first place. No, it would be impossible to maintain such a “two-tier” system in which some priests willing to commit sacrilege could work side-by-side with those who refuse to abandon Christ.

In addition, no seminarian who indicated any hesitation on this “merciful” new practice of “tolerance” for “second marriages” could be allowed to be ordained. The whole trend of more orthodox and devout priests and seminarians, the “JPII” and Ratzinger generations, would come to an instant, screeching halt.

Presumably a test for this would be easy to install. A lay couple in a second, non-sacramental union could be invited to give a lecture on their officially “tolerated” lifestyle at the seminary, and at the Mass following, they would naturally present themselves for Holy Communion and attendance could be taken.

And of course, the flip side applies and only those seminarians who unflinchingly passed the test would be ordained. Only those would be left who are willing to commit this sacrilegious act, who, in effect, either simply did not believe in the reality of Transubstantiation or in the indissolubility of marriage. This, of course, would also mean that only seminarians could be ordained who did not believe that the Gospels are a reliable source for the words and intentions of Christ. It would, in effect, require that only atheists could be accepted as seminarians and could make it through the process.

Among the laity, of course, the return to reverence for the Eucharist that has been such a feature of Catholic life throughout the world would also halt. The Church will have finally broken definitively and formally with the past and sent out a clear declaration that the Eucharist is really just no big deal. It’s not really the Body, Blood, Soul and Divinity of Christ hidden under the accidents of bread and wine. It’s really just a symbol of unity that everyone who really wants to can share.

Those diehards for whom the Eucharist is still the “source and summit of the Christian life” would also not be able to stand to watch the desecration. Nor, I imagine, would they be willing or able to withstand the barrage of propaganda that would inevitably come from the pulpits of the only priests still allowed to celebrate Mass.

No, the exodus of the believers that started to polarize the Church fifty years ago would be complete, and the result would be, will be, global schism.

And as we have seen with the Humanae Vitae model of “pastoral” but not “doctrinal” changes, of course the real doctrine will never be mentioned from the pulpit again (when was the last time there was a sermon on contraception? anyone?). So the next generation, if there is one (since we are not allowed to seek converts) will know nothing of any of this since the way to avoid “division” is simply never to talk about the divisive doctrines again.

Kasper himself has praised this method of preserving doctrine on one hand while ignoring it on the other. While the dreaded teaching remains on the books, it becomes irrelevant in the new “pastoral” practice of never, ever mentioning it. How long before the new pastoral Eucharistic practice gets the same treatment as contraception.

And what about the rest? What about the sanctity of life? Well, perhaps a girl is only 13 and has been raped, by a stepfather maybe. And it is, after all, only this dowdy, rigid and old-fashioned “doctrine” that says an abortion is always a moral evil. It is only backed up by a few little lines of Scripture. But we have learned, haven’t we, that even the very words of Christ are irrelevant when feelings are at stake.

And the Marian doctrines? Well! Where are even the Scriptural references for such arcane and, frankly, divisive “doctrines”? Let us not forget that Cardinal Kasper, before being promoted to Head Churchwrecker, was many years the Church’s chief ecumenist. He is particularly sensitive to the hurt feelings of our Protestant brethren who never did like Mary much anyway.

No, the bishops are correct who have soothingly cooed that “of course!” the Church cannot ever change her doctrine. But this proposal will, in effect, produce a new, super-dogma: that all doctrine, all Scripture, all tradition is unimportant, that it is not a law to be obeyed, or a description of hard, concrete reality. It’s really just a kind of cultural relic from the past that we preserve for the sake of a silly and irrelevant nostalgia, held by a few “rigid” and “unforgiving” Catholics who refuse to let it go. And who will soon be driven out of the Church entirely anyway.

Published in Remnant Articles
back to top
Last modified on Monday, October 6, 2014
Tweet
More in this category: « Deconstructing Modernism: Defending Pascendi in 1908: Part IV The Secret Synod Freak Show, Brought to You by Pope Francis »