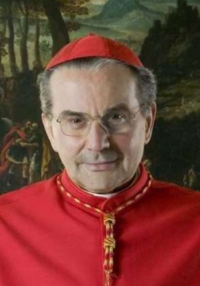 From our friends at National Catholic Register:

Ed Pentin: One of the late Cardinal Carlo Caffarra’s last wishes — to have an international conference to examine ways to resolve the current crisis of division in the Church — will take place in Rome in early April, the Register has learned.

Details have yet to be officially released, but the conference is expected to explore the limits of papal infallibility as well as seek ways to overcome the division in the Church, exacerbated by what many see as pastoral and doctrinal confusion on key moral issues.

Sources who were close to Cardinal Caffarra up until his death last September said he had become deeply disillusioned by the crisis in the Church, especially the confusion and division caused by differing interpretations of Chapter VIII of Amoris Laetitia on the issue of giving the Eucharist to Catholics engaging in sexual relations outside marriage, such as the divorced and civilly remarried and cohabiting couples.

The archbishop emeritus of Bologna was one of the four signatories of the dubia, five questions sent to the Pope in 2016 asking for clarification of the document to ascertain whether it was in continuity with the Church’s teaching and tradition, but to which the Pope has not responded.

…The upcoming conference is expected to also debate a related subject: the limits of papal power, amid concerns that Pope Francis is leading the Church in a direction that they consider to be a departure from the faith, continuity and tradition, and that he is doing so in an authoritarian fashion and without unanimous consent of bishops.  READ MORE HERE

REMNANT COMMENT: This thing is far from over, and Pope Francis does not win in the end. The pro-family, pro-marriage forces have a powerful heavenly ally in Cardinal Caffarra—the late archbishop emeritus of Bologna—who shortly before he died pointed out that “at the root of this is the work of Satan, who wants to build an actual anti-creation. This is the ultimate and terrible challenge which Satan is hurling at God. ‘I am demonstrating to you that I am capable of constructing an alternative to your creation. And man will say: it is better in the alternative creation than in your creation.’”

Not long before his death, Cardinal Caffarra also let it be known that he’d received a letter from Sister Lucia reminding him that “there will come a time when the decisive confrontation between the Kingdom of God and Satan will take place over marriage and the family.” He went on the record, declaring that he firmly believed Sister Lucia’s prediction was “being fulfilled in these days of ours” but that in the end the Immaculate Heart will triumph and the enemies of God would fall.

Perhaps His Eminence—one of the original “dubia cardinals”—is still working in Rome even now, trying to save the Church from the Modernists who have her by the throat.

Let us pray that whatever it is, this conference will be imbued with the spirit of Carlo Cardinal Caffarra.