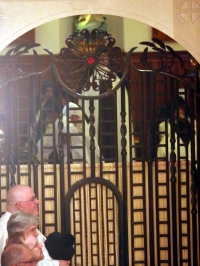 Philadelphia’s Carmelite Monastery of St. Joseph and St. Anne, at 66th Avenue and Old York Road, celebrated the 115th anniversary of its foundation with a Solemn High Mass on the evening of Wednesday, July 26. The Carmel, which was established by nuns from the Boston Carmel and originally located at 18th and Poplar Streets then at 44th and Spruce Streets, has been at its current monastery since 1910, according to the Prioress, who in keeping with the Carmelite charism does not wish to be named.  The nuns themselves were an unseen presence at the Mass because of their rules of strict enclosure. They only receive visitors from behind a screen.

The Mass was really a double celebration. The Philadelphia Carmel, which was down to three active members, marked the arrival on July 25 of 10 new members drawn from thriving Carmels in Valparaiso, Nebraska in the Lincoln Diocese, and Elysburg, Pa. in the Diocese of Harrisburg, which was itself established by nuns from Valparaiso

The new arrivals “are all in their 20s and 30s and they are all devout, intelligent and talented, and many were home-schooled,” the Prioress said. “They want an authentic Carmelite vocation. We will have a solemn profession for several of them in January and one is still a novice.

The Mass was celebrated in the monastery’s beautiful chapel which was designed by Maginnis and Walsh, the Boston architects that later designed the Basilica of the National Shrine of the Immaculate Conception in Washington. The celebrant was the monastery’s new chaplain, Father Scott W. Allen, F.S.S.P. (Fraternal Society of St. Peter). READ MORE HERE

REMNANT COMMENT: One wonders just how much additional evidence needs to be exhibited before mainstream Catholics finally begin to accept the fact that the future of the Catholic Church depends on a complete restoration of her traditional belief, liturgy and practice.  As the number of practicing Catholics since 1965 (the close of the Second Vatican Council) continues to plummet to record lows, an unprecedented priest shortage forces church closings by the thousands, and religious vocations are fast becoming a thing of the past—it should be pretty clear even to the most intellectually sluggish among us that something has gone terribly wrong, and that that something has everything to do with the Church’s abandonment of Tradition and subsequent preoccupation with novelty.  This becomes even more abundantly obvious when considering the statistical evidence of high numbers of vocations to the priestly and religious life still taking place in traditionalist enclaves, monasteries and seminaries. Could the handwriting on the wall be any more obvious?

The ecclesiastical hippies had their day; their rainbow vestments and felt banners have become moth-eaten and dingy. Traditional Catholicism, on the other hand, is a youth movement—it is the future. The Revolution is entering its dotage. Ad maiorem Dei gloriam.

Published in Headline News Articles
[Comment Guidelines - Click to view]
The Remnant values the comments and input of our visitors. It’s no secret, however, that trolls exist, and trolls can do a lot of damage to a brand. Therefore, our comments are heavily monitored 24/7 by Remnant moderators around the country.  They have been instructed to remove demeaning, hostile, needlessly combative, racist, Christophobic comments, and streams not related to the storyline. Multiple comments from one person under a story are also discouraged. Capitalized sentences or comments will be removed (Internet shouting).
The Remnant comments sections are not designed for frequent personal blogging, on-going debates or theological or other disputes between commenters. Please understand that we pay our writers to defend The Remnant’s editorial positions. We thus acknowledge no moral obligation whatsoever to allow anyone and everyone to try to undermine our editorial policy and create a general nuisance on our website.  Therefore, Remnant moderators reserve the right to edit or remove comments, and comments do not necessarily represent the views of The Remnant.
back to top
Last modified on Wednesday, August 2, 2017
Tweet

More in this category: « Bible Study in the White House EUROPEAN COURT OF HUMAN RIGHTS Rules Landmark Victory for Freemasonry »