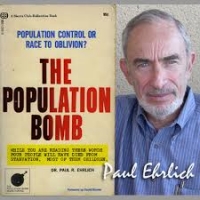 Editor's Note: We asked Remnant columnist, Elizabeth Yore, who has covered these Vatican conferences extensively for The Remnant, what she thinks of this latest invitation.  Her response: "Every time I think it can't get any worse, Francis sinks to a new low. Inviting this discredited pro-death charlatan to advise the Vatican exposes the diabolical depths of this Papacy. I have been trying to wake Catholics to the abortion-laden population control agenda at the Pontifical Academy for three years. If this doesn't wake up the pro-life movement to organize against this papacy, nothing will. He is moving at lightening speed at the behest of Soros and the UN because of the emergence of the Brexit and Trump populist movements." MJM

The Vatican will once again be used as a forum to advance population control. Pro-abortion advocate Paul Ehrlich, father of the modern population control movement and author of the 1968 best-seller "The Population Bomb," has been invited to speak at the Vatican during the February 27-March 1 conference that will discuss "how to save the natural world."

This is deplorable when we consider the possible millions of deaths globally that he and his ideas may have indirectly been responsible for over the past five decades. Is the Vatican deliberately seeking to put the unborn to death?

The Stanford biologist, who advocates forced abortion for population control and who champions sex-selective abortion as well as mass forced sterilization as legitimate methods to curb population growth, will present to the Vatican a paper highlighting "Population Numbers" as he discusses "Causes and Pathways of Biodiversity Losses."

Titled Biological Extinction, the conference is being conjointly sponsored by the Pontifical Academy of Sciences and the Pontifical Academy of Social Sciences and is designed to promote the fallacy that the procreation of human life is what poses the major threat to our planet. As they see it, the great enemy of "Mother Earth" is human babies, since they grow up and pollute the planet with their "C02 emissions."

The conference will closely echo the Vatican climate change conference of April 28, 2015, in which several representatives from the U.N. were given a platform to voice their "Sustainable Development Goals" of making the earth a cleaner and safer place through worldwide population control (abortion). The one-day summit, entitled Protect the Earth, Dignify Humanity: The Moral Dimensions of Climate Change and Sustainable Development, featured key environmental advisers from different countries, including U.N. Secretary General Ban Ki moon and Professor Jeffrey Sachs who are notorious advocates of abortion that operate at the highest levels of the United Nations.

Unfortunately, the pope has made a habit of conferring with scientists and anti-life agents in his plan to make the world a better place. "Science and religion, which offer different approaches to reality, can enter into an intense and productive dialogue with each other," he says in his encyclical on climate change.

What this has done is to give the agents of Antichrist a prominent platform from which to advance their "sustainable" pro-death agenda to the world. The same pope who said that Catholics shouldn't "breed like rabbits" has now opened the door to the Eternal City and has allowed these agents to come in and essentially say this same thing.

Dr. Joachim Schnellnhuber, who famously said in 2009 that the earth's "carrying capacity" is less than 1 billion people and who insists that the earth is overpopulated by at least 6 billion people, was chosen by the Vatican to help present the pope's encyclical at the June 18, 2015, Vatican press conference.

Likewise, Carolyn Woo, CEO and President of "Catholic Relief Services" known for its ongoing funding of abortion and contraception, was chosen by the Vatican to help assist in the release of the encyclical.

Similarly, pro-abortion candidate Bernie Sanders was invited last April to speak at a Vatican conference on social, economic and environmental issues. "I am very excited to have received an invitation from the Vatican to participate in a major conference dealing with how we inject morality into the world's economy," Sanders told reporters.

And of course, U.N. pro-aborts Ban Ki moon and Jeffrey Sachs were given a prime opportunity to plug population control at the Vatican climate change summit in April 2015. Their proposals were endorsed by the Vatican the very next day.

And now, the notorious Paul Ehrlich who initiated this worldwide scare against life forty-nine years ago will be the honored guest speaker at the upcoming Vatican conference on "how to save the natural world" from human infants.

Is this what Francis calls "gradualism?" Little by little, he is getting the church used to devious changes, while at the same time preaching that "resistance" to change that "takes refuge in traditions" is from "the devil."

Or is this latest change being pushed on the pope against his will? Francis, who has been very apt to "exhort" the Church through informal interviews could very well arrange one of these interviews to blast the Vatican's collusion with Ehrlich, if in fact he can't do this from the Chair of Peter. If the pope doesn't do this, what are we to think?

Let us give Pope Francis the benefit of the doubt and pray that he wash his hands of Ehrlich and all that he stands for.

Published in Headline News Articles
[Comment Guidelines - Click to view]
The Remnant values the comments and input of our visitors. It’s no secret, however, that trolls exist, and trolls can do a lot of damage to a brand. Therefore, our comments are heavily monitored 24/7 by Remnant moderators around the country.  They have been instructed to remove demeaning, hostile, needlessly combative, racist, Christophobic comments, and streams not related to the storyline. Multiple comments from one person under a story are also discouraged. Capitalized sentences or comments will be removed (Internet shouting).
The Remnant comments sections are not designed for frequent personal blogging, on-going debates or theological or other disputes between commenters. Please understand that we pay our writers to defend The Remnant’s editorial positions. We thus acknowledge no moral obligation whatsoever to allow anyone and everyone to try to undermine our editorial policy and create a general nuisance on our website.  Therefore, Remnant moderators reserve the right to edit or remove comments, and comments do not necessarily represent the views of The Remnant.
back to top
Last modified on Saturday, January 14, 2017
Tweet
More in this category: « Edward Peters Nails It: What About Canon 915? A NEW BOOK BY MSGR. FENTON: One of America's Greatest Theologians »