SSPX District Superior for Italy Objects to Scandal in Sweden 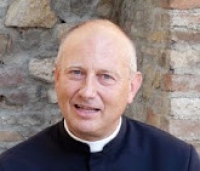 The Umpteenth Scandal Before Which We Cannot Remain Silent

On Sunday 30th October a strong earthquake destroyed the basilica built in Norcia on the site of the birthplace of Saint Benedict, only leaving intact its façade. The photos which show this sad event are emblematic and symbolic of a Christian Europe, of which Saint Benedict is the Patron, but which is repudiating its own roots. These photos are even more-so symbolic of a Church which is gutting itself of its contents, concealing the ruins behind a media façade which cannot deceive those who love the Spouse of Christ and know doctrine and history.

The visit of Pope Francis to Sweden to commemorate the 500th anniversary of Luther’s revolt, whose errors caused the loss of thousands of souls and provoked wars which ravaged Europe, is only the latest glaring confirmation of this. How can one declare oneself to be “profoundly grateful for the spiritual and theological gifts received through the Reformation”, thanking God for this, as happened in the ecumenical liturgy of Lund? How can one say that “Lutherans and Catholics have wounded the visible unity of the Church” without betraying one’s Faith?

To thank God for the spread of heresy is tantamount to attributing evil to God Himself, with a truly blasphemous act.

Faced with this umpteenth scandal one cannot remain silent, especially if one has an important role in the ecclesiastical hierarchy, since he who remains silent consents and makes himself an accomplice.

Published in Headline News Articles
[Comment Guidelines - Click to view]
The Remnant values the comments and input of our visitors. It’s no secret, however, that trolls exist, and trolls can do a lot of damage to a brand. Therefore, our comments are heavily monitored 24/7 by Remnant moderators around the country.  They have been instructed to remove demeaning, hostile, needlessly combative, racist, Christophobic comments, and streams not related to the storyline. Multiple comments from one person under a story are also discouraged. Capitalized sentences or comments will be removed (Internet shouting).
The Remnant comments sections are not designed for frequent personal blogging, on-going debates or theological or other disputes between commenters. Please understand that we pay our writers to defend The Remnant’s editorial positions. We thus acknowledge no moral obligation whatsoever to allow anyone and everyone to try to undermine our editorial policy and create a general nuisance on our website.  Therefore, Remnant moderators reserve the right to edit or remove comments, and comments do not necessarily represent the views of The Remnant.
back to top
Last modified on Friday, November 4, 2016
Tweet
More in this category: « Bishop: Catholics Can't Vote For Pro-Aborts...But Getting 'Regularized' by Pope Francis: A Fatal Mistake »