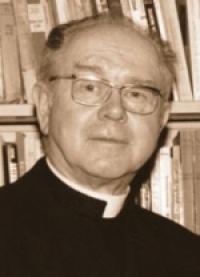 Mons. Michel Shooyans
This just in from LifeSiteNews — Monsignor Michel Schooyans, a top adviser to Pope St. John Paul II who was also close to Pope Benedict XVI, has issued a dire warning about the current trajectory in the Catholic Church. In a paper, published on LifeSiteNews, Professor Schooyans, a member of several Pontifical Academies and Councils, writes that “the Synod on the Family has revealed a profound malaise in the Church.”

The retired professor from Belgium, now 86, speaks of the “crisis” in the Church, saying, “it is futile to close our eyes: the Church is challenged in its very foundations.” READ ARTICLE HERE

REMNANT COMMENT: Yes, but the Holy Spirit controls everything the Pope does, and so the Pope can't be bad. Every Pope is a saint, in fact…it’s just a question of when to announce it.   Obviously, Monsignor Schooyans lacks faith. What he should be doing instead of warning the world that the human element of the Church has fallen into enemy hands, is rejoicing over how beautiful everything is and how great it is to be Catholic. I know that's what all the great defenders of the Catholic Faith did down through the ages, right? I mean, they just sat there and let the enemies of souls and truth run roughshod over the Church because...well, because to do anything to stop them would have been to sin against the virtue of faith. God's got this!

Let’s go over this one more time: The.Church.is.God’s.Church—not ours, and we need to let Him run the show.

The.Holy.Spirit.personally.chose.Bergoglio.to.be.pope.  To question him is to question Him, if you know what I mean.

This is what the neo-Catholic experts tell us all the time, and they should know. Heck, most of their leading pundits are converts.  (How cool is that, by the way.)

Published in Headline News Articles
[Comment Guidelines - Click to view]
The Remnant values the comments and input of our visitors. It’s no secret, however, that trolls exist, and trolls can do a lot of damage to a brand. Therefore, our comments are heavily monitored 24/7 by Remnant moderators around the country.  They have been instructed to remove demeaning, hostile, needlessly combative, racist, Christophobic comments, and streams not related to the storyline. Multiple comments from one person under a story are also discouraged. Capitalized sentences or comments will be removed (Internet shouting).
The Remnant comments sections are not designed for frequent personal blogging, on-going debates or theological or other disputes between commenters. Please understand that we pay our writers to defend The Remnant’s editorial positions. We thus acknowledge no moral obligation whatsoever to allow anyone and everyone to try to undermine our editorial policy and create a general nuisance on our website.  Therefore, Remnant moderators reserve the right to edit or remove comments, and comments do not necessarily represent the views of The Remnant.
back to top
Last modified on Wednesday, July 13, 2016
Tweet