The Prodigal Son vs. The Liberal Father 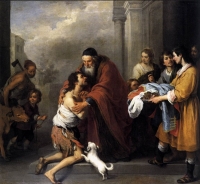 Today from Vatican Insider: In the Gospel, “Jesus reminds us that one does not live in the house of the Lord because they expect a reward but because they have the dignity of co-responsible children. It is not about “bartering” with God but following Jesus who gave his life unconditionally on the cross.” At today’s Audience in St. Peter’s Square, Pope Francis continued a series of catecheses dedicated to the Jubilee theme of mercy, explaining the parable of the “merciful father”, better known as the parable of the prodigal son...

“Let us begin from the end, from the joy in the heart of the Father, who says: “Let us rejoice, because my son was dead and is alive again, he was lost and is found”. These were the words with which the father interrupted his youngest son when the latter was confessing his guilt: “I am no longer worthy to be called your son…” But the father’s heart found this remark unbearable and hastened to give the symbols of his son’s dignity back to him: beautiful clothes, a ring, sandals. The father Jesus describes is not an offended or resentful father who says: ‘you’ll pay!’. No, on the contrary, the father embraces him; all the father cares about is that his son is there in front of him, alive and well. The scene of the son’s return is moving: “While he was still far away, his father saw him and was filled with compassion; he ran to his son, threw his arms around him and kissed him.” What does this mean? It means the father would constantly go up onto the terrace and look out onto the road to see if his son was coming home. He waited for him. Despite everything his son had done, he waited for him. How beautiful a father’s tenderness is…” READ ARTICLE HERE

REMNANT COMMENT: Words fail. Surely His Holiness realizes the difference here is that the prodigal son came home. He ceased being 'prodigal' and admits to his sins. The Year of Mercy seems to be sort of glossing over that part. The prodigal son doesn't really need to change all that much, it seems.  He doesn't even need to come home. He can still live with his mistress. He can be a public adulterer. It doesn't matter. He gets the fatted calf anyway.

Holy Mother Church as always been a faithful dispenser of God's mercy, long before Francis arrived on the scene. We've all been forgiven in Confession. We've all wept with gratitude over God's great mercy. All that was ever required of us His wayward children was to make some effort to stop sinning and to repent. Demanding Mercy without repentance is a blasphemy against God.

The parable is called 'The Prodigal Son', Your Holiness, not the 'The Liberal Father.'


Published in Headline News Articles
[Comment Guidelines - Click to view]
The Remnant values the comments and input of our visitors. It’s no secret, however, that trolls exist, and trolls can do a lot of damage to a brand. Therefore, our comments are heavily monitored 24/7 by Remnant moderators around the country.  They have been instructed to remove demeaning, hostile, needlessly combative, racist, Christophobic comments, and streams not related to the storyline. Multiple comments from one person under a story are also discouraged. Capitalized sentences or comments will be removed (Internet shouting).
The Remnant comments sections are not designed for frequent personal blogging, on-going debates or theological or other disputes between commenters. Please understand that we pay our writers to defend The Remnant’s editorial positions. We thus acknowledge no moral obligation whatsoever to allow anyone and everyone to try to undermine our editorial policy and create a general nuisance on our website.  Therefore, Remnant moderators reserve the right to edit or remove comments, and comments do not necessarily represent the views of The Remnant.
back to top
Last modified on Thursday, May 12, 2016
Tweet