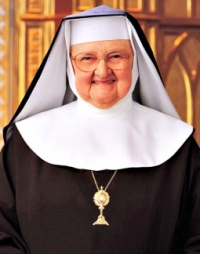 An interesting point today from Churchpop.com: "Most people know Mother Angelica (may she rest in peace!) as the spunky nun who founded EWTN. But did you know that she preferred the use of the Latin language for Mass?

"Catholic journalist Raymond Arroyo, who wrote a popular biography of Mother Angelica, reports that she thought that “Latin was the perfect language for the Mass.” She explained: “It was almost mystical. It gave you an awareness of heaven, of the awesome humility of God who manifests Himself in the guise of bread and wine. The love that He had for us, His desire to remain with us is simply awesome. You could concentrate on that love, because you weren’t distracted by your own language.”

"She also didn’t like how the priest faces the people, rather than the altar. She said this turned the Mass into “something between the people and the priest.” “Too often,” she continued, “it’s just some kind of get-together and Jesus is all but forgotten.” READ MORE HERE

REMNANT COMMENT: God bless Mother Angelica. I fear we shall not again see mainstream Catholic television activists (who are actually Catholic) such as Mother Angelica for a long, long time.  Here was a woman who wasn't afraid to speak the truth, no matter the costs.  I'll never forget back on May 16, 2001, for example, hearing these words live from Mother Angelica when she was asked if she believes we were given the entire Third Secret of Fatima:

As for the  Secret, well I happen to be one of those individuals who thinks we  didn’t get the whole thing. I told ya! I mean, you have the right to  your own opinion, don’t you, Father? There, you know, that’s my  opinion. Because I think it’s scary. And I don’t think the  Holy See is going to say something that does not happen, that might happen. And  then what does it do if it doesn’t happen? I mean the Holy See cannot  afford to make prophecies, because. I know,  — I don’t know — my  funeral . . . It’s not me, so don’t look at me . . . Something’s gonna happen soon. It could be twenty years before it  happens. So to God “soon” could be a thousand years. We don’t  know that.

Eternal rest grant unto her, O Lord, and let perpetual light shine upon her. May she rest in peace.

Published in Headline News Articles
[Comment Guidelines - Click to view]
The Remnant values the comments and input of our visitors. It’s no secret, however, that trolls exist, and trolls can do a lot of damage to a brand. Therefore, our comments are heavily monitored 24/7 by Remnant moderators around the country.  They have been instructed to remove demeaning, hostile, needlessly combative, racist, Christophobic comments, and streams not related to the storyline. Multiple comments from one person under a story are also discouraged. Capitalized sentences or comments will be removed (Internet shouting).
The Remnant comments sections are not designed for frequent personal blogging, on-going debates or theological or other disputes between commenters. Please understand that we pay our writers to defend The Remnant’s editorial positions. We thus acknowledge no moral obligation whatsoever to allow anyone and everyone to try to undermine our editorial policy and create a general nuisance on our website.  Therefore, Remnant moderators reserve the right to edit or remove comments, and comments do not necessarily represent the views of The Remnant.
back to top
Last modified on Wednesday, March 30, 2016
Tweet