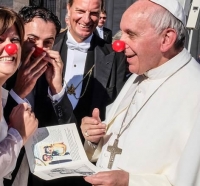 Now that Francis is officially allowing sacrilegious Communion to unrepentant adulterers, sane Catholics are starting to ask questions. Isn’t the pope supposed to be our guardian of orthodoxy? Isn’t he infallible? Isn’t the Church supposed to be indefectible? In that vein, I was fortuitous enough to come across the following article, which discusses possible scenarios regarding an heretical pope. I know that many articles have been written on this subject since Vatican II, mostly pertaining to the sedevacanist issue. However, I have never seen an article quite like this. The kicker? It was written in 1868. Therefore it cannot be accused in any way of being biased. The author speculates on possibilities regarding the pope I have never before seen in a Pre-Vatican II Catholic document. I think it is a fascinating read.


The article was written by the distinguished William George Ward. According to his Wikipedia entry:

Ward left the Church of England in September 1845, and was followed by many others, including Newman himself. After his reception into the Church of Rome, Ward devoted himself to ethics, metaphysics and moral philosophy. He wrote articles on free will, the philosophy of theism, on science, prayer and miracles for the Dublin Review…He was an opponent of Liberal Catholicism and defender of papal authority. In 1851 he became professor of moral philosophy at St Edmund's College, Ware, and the following year he was appointed to the chair of dogmatic theology. In 1863 he became editor of the Dublin Review (1863–1878). He supported the promulgation of the dogma of Papal Infallibility in 1870.

Ward wrote a response to an article by P. Le Page Renouf entitled, “The Condemnation of Pope Honorius,” which appeared in The Dublin Review in 1868. An excerpt of said article pertaining to a speculative heretical pope is provided below. All emphasis is in the original.

Please buckle up and get ready for a wild ride in Pre-Vatican II speculative theology. Do any of the scenarios proposed by Ward apply to Francis or our present day situation? We report, you decide. See you in the combox.

…3. "Throughout the middle ages," says the author (p. 31), "it was never doubted that a Pope might . . . become a heretic or schismatic, mad or imbecile;" and he implies by his context that this is inconsistent with the doctrine now advocated by Ultramontanes. Now no fairer specimen can be found of a modern Ultramontane, than Dr. Murray, of Maynooth. Dr. Murray refers to the possibility of some Pope being a formal heretic, and also of some Pope becoming afflicted with insanity; nor does he allege the existence of a Divine promise against either calamity.

Without entering further on the question of insanity, we will give his view on the more important issue. (See d. 20, n. 108). Can the Pontiff, he asks, become a formal heretic? Bannez, Valentia, and Laymann answer in the affirmative; Tanner and Viva think the thing uncertain; Bellarmine and Wiggers account it probable—Suarez even more probable—that God will not permit this. He cites no one theologian who considers it certain that some Pope may not be a formal heretic; but he adds most reasonably, that the fact of no such circumstance having occurred for so many centuries, affords much increased probability to the more favourable opinion. Dr. Murray adds, as a truth admitted by all, that the Pope may fall materially into dogmatical error, and even into heresy.

However let us suppose, for argument's sake, that Mr. Renouf's allegation were true. On such an hypothesis, in addition to the Ultramontane doctrine itself,—viz. that the Pope is infallible ex cathedra, —modern Ultramontanes have added another tenet altogether distinct; viz., that no Pope can fall into formal heresy. For this tenet doubtless they can claim no support from mediaeval theologians: but how can such a circumstance affect in the slightest degree the value of mediaeval testimony to the Ultramontane doctrine itself? It would have been very strange if any mediaeval theologians had held the opinion that no Pope can fall into heresy; considering that, as Mr. Renouf himself informs us (p. 43), S. Liberius was called a heretic in the Roman Breviary, and his fall "was accepted as one of the simply indisputable facts of Church history." On the other hand, as critical and historical studies have advanced, it has become more and more evident that in fact no Pope has ever become a formal heretic; and in consequence the pious hope and opinion has largely and increasingly spread, that God will always preserve the Church from such a calamity.

4. Since the mediaevals considered it a certain fact that a Pope could fall into heresy, the question had to be faced, what would result from such a phenomenon. By far the commoner opinion seems to have been, as Mr. Renouf points out (pp. 34- 37), that he would cease to be " Pope by ceasing to be a Catholic." For ourselves, while counting it indefinitely more probable that God will never permit such a calamity, we incline with diffidence to the mediaeval opinion; we incline to think that "by the very fact through which he falls from the Faith of Peter, he "would" fall from the Chair and See of Peter " (p. 33).

5. But here ensues a difficulty, to which our author draws attention. A Pope may—by hypothesis—profess formal heresy; and yet that profession may be generally unknown. He has ceased then to be really Pope, and yet is universally regarded as Pope. Mr. Renouf writes as though this difficulty were confined to the particular case of a Pope secretly professing heresy; whereas his own authority, Turrecremata, might have reminded him (p. 37) that it applies with even greater force to other cases also. Lord Macaulay somewhere supposes that, at a time when hordes of barbarians were baptized en masse, some ten or twenty may have accidentally missed valid baptism. One of these afterwards undergoes the form of ordination and consecration, and is accounted a bishop; in due time he is appointed to the Pontificate. He is no real Pope, yet every one so accounts him. Even more plausible difficulties are often pressed by Protestants, as arising from the Catholic doctrine concerning sacramental intention. All these perplexities however are really quite groundless, except on one most strange supposition; except on the supposition that God, having founded the Church, ceases thenceforth to protect and watch over her. Divine Providence, as Turrecremata says (Renouf, p. 37j, will protect her against all such evils.

Turrecremata's doctrine has been carried by later theologians to its legitimate results. Divine Providence, he says, will protect the Church against any evil results which might ensue to the Church, from an unavoidable mistake of some seeming Pope for a true one. But if the false Pope proceeded to put forth doctrinal determinations quasi ex cathedra, most serious evil would accrue to the Church. It is the explicit doctrine therefore of later theologians, that so soon as a Pope, recognized as such by the Universal Church, has put forth any doctrinal determination, he is infallibly the true Pope. Even F. Ryder (Letter, p. 9) considers that this proposition is de fide. Whenever therefore any universally recognized Pope puts forth any doctrinal determination, it is infallibly certain that he is not unbaptized, nor otherwise disqualified for the Pontificate.

6. But lastly, urges our author—and this on the surface is his strongest point—mediaeval theologians considered that such a seeming Pope may take advantage of his position, by inculcating heresy on the Church. Both Turrecremata and Ockham (pp. 33-35)—the former of whom denounced the latter "with execration "—yet agree in this opinion. A seeming Pope, according to them, may solemnly "define " "an error against the Faith," and "assert that it is to be held by Christians as Catholic."

Now in the first place, of course they held this opinion; for every one thought at that time that S. Liberius had acted in this very way.

Then, secondly, Mr. Renouf is quite mistaken in supposing that such an opinion has been unheard of since the Reformation. There have been few more eminent post-Tridentine Ultramontanes than Valentia; who expressly quotes Turrecremata's opinion, and pronounces it "not entirely improbable" ("De Objecto Fidei," (p. 7, q. 6).

Nor, thirdly, can the author say that later Ultramontanes have endeavoured to conceal the fact of this opinion having once existed. That admirable journal, the " Katholik," of Mayence, has entered fully on the subject within the last ten years.

We are not ourselves prepared to concur with this opinion; but when it is fully and fairly stated, there is no difficulty in seeing how Ultramontanes may have held it. We cannot explain it better than by putting an imaginary case. Ultramontanes maintain, that the one way assigned by God to Christians for their learning orthodox doctrine, is a docile submission of intellect to whatever the Supreme Pontiff teaches ex cathedra. Suppose then Honorius had really taught ex cathedra that in Christ there is but one operation and one will. In such a case, all Christians would be required by Ultramontane doctrine to hold this tenet; and so on the Ultramontane hypothesis God would guarantee error as truth. Consequently (as we have so often observed) Ultramontane doctrine would at once be refuted, if any one could show that Honorius taught Monothelism ex cathedra.

But now change the supposition. Time goes on: S. Leo II confirms the Sixth Council, and Monothelism is definitively condemned. Suppose some subsequent occupier of S. Peter's chair were to declare that in Christ there is but one will, and were to exclude from his communion those who think otherwise. This would be no doctrinal determination, but an heretical profession. The Church has already definitively declared that in Christ there are two wills; and he who publicly denies that dogma, avows himself a heretic.

Turrecremata and other mediaeval theologians thought that God might permit this; because (as is evident) no perplexity or uncertainty could thence accrue to the Catholic's faith. To use their own language—the seeming Pope is no longer a "shepherd," but stands confessed "a wolf." And so Valentia explains Turrecremata's doctrine. "Grave authors admit [that a seeming Pope] may desire to obtrude on others his private heresy, which is notoriously such." " Nor would this," he adds, "involve danger to the Church. For she, knowing that through manifest heresy such a Pontiff has fallen from his authority and is teaching contrarily to the Church's notorious Faith, would be bound to flee from him."

This whole line of thought, as we have already explained, is entirely alien to the spirit of later Ultramontane theologians; because as sound criticism has advanced, the opinion has most widely prevailed among them, that God will never in fact permit a Pope to fall into formal heresy…

[Comment Guidelines - Click to view]
The Remnant values the comments and input of our visitors. It’s no secret, however, that trolls exist, and trolls can do a lot of damage to a brand. Therefore, our comments are heavily monitored 24/7 by Remnant moderators around the country.  They have been instructed to remove demeaning, hostile, needlessly combative, racist, Christophobic comments, and streams not related to the storyline. Multiple comments from one person under a story are also discouraged. Capitalized sentences or comments will be removed (Internet shouting).
The Remnant comments sections are not designed for frequent personal blogging, on-going debates or theological or other disputes between commenters. Please understand that we pay our writers to defend The Remnant’s editorial positions. We thus acknowledge no moral obligation whatsoever to allow anyone and everyone to try to undermine our editorial policy and create a general nuisance on our website.  Therefore, Remnant moderators reserve the right to edit or remove comments, and comments do not necessarily represent the views of The Remnant.
back to top
Read 7369 times Last modified on Wednesday, April 13, 2016
Tweet

More in this category: « Msgr. Moyes: The True Catholic Teaching on Marriage Authentic Mercy: The Truth Will Set You Free »