How is New Coke Analogous to the New Mass? 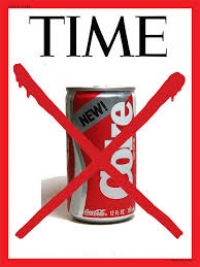 Even Time Magazine Got it Right

Almost thirty years ago now, in April of 1985, the Coca-Cola company announced its plans to change the formula of “the world’s most popular soft drink” (www.thecoca-colacompany.com/heritage/cokelore_newcoke.html). This was done, so the company related later, because Coke was losing ground to Pepsi in the world market and in order to make itself more attractive to the taste of modern society (and therefore more profitable), the decision was made to change its signature product’s formula after 99 years of success.

One must state that this was not done without some forethought. There were taste-tests with over 200,000 consumers who described themselves as Coke drinkers. While many of these taste-tests brought positive responses, some 10-12% of Coke drinkers said they would not buy the new product if it was replacing the traditional recipe, and may never buy Coke again. Armed with these overall positive results, Coca-Cola went ahead and made the switch. No one at the company could have predicted what went on for the next 79 days.

People began phoning the company at a rate over three times the norm to register their annoyance and outrage that the traditional formula was tampered with. Some Coke drinkers even began to hoard cases of the traditional Coke in their homes. Letters arrived at Coca-Cola’s corporate headquarters hurling insults at the managers who approved this daft idea. All of this was before Coca-Cola had begun to market the new formula outside the United States! It is worth noting what the Coca-Cola corporation now states about the situation and what it didn’t take into account: “The fabled secret formula for Coca-Cola was changed, adopting a formula preferred in taste tests of nearly 200,000 consumers. What these tests didn't show, of course, was the bond consumers felt with their Coca-Cola -- something they didn't want anyone, including The Coca-Cola Company, tampering with” (www.thecoca-colacompany.com/heritage/cokelore_newcoke.html).

At the end of these 79 very eventful days, Coca-Cola announced that it would continue to make its traditional version of Coke. People had spoken and management had listened. Coca-Cola continued to market the new formula under the title of “New Coke”, while the traditional formula would be called “Coke Classic.” By the early 1990s, “New Coke” was off the market and “Coke Classic” went back to being just plain old “Coke.”

It is also worth noting what Coca-Cola had to say about lessons learned from this fiasco: “The events of the spring and summer of '85 -- pundits blasting the "marketing blunder of the century," consumers hoarding the "old" Coke, calls of protests by the thousands -- changed forever The Coca-Cola Company's thinking”(www.thecoca-colacompany.com/heritage/cokelore_newcoke.html). As  mentioned above they got the message and would remember it for a long time.

Another interesting point in this entire event were the comments passed by Coke drinkers who wanted the traditional formula restored. Coca-Cola reported: “Protest groups -- such as the Society for the Preservation of the Real Thing and Old Cola Drinkers of America (which claimed to have recruited 100,000 in a drive to bring back "old" Coke) -- popped up around the country. Songs were written to honor the old taste. Protesters at a Coca-Cola event in downtown Atlanta in May carried signs with "We want the real thing" and "Our children will never know refreshment” (www.thecoca-colacompany.com/heritage/cokelore_newcoke.html).

Nowadays, although the Coca-Cola company itself tries to put a different spin on it, most everyone agrees that this was probably the greatest gaff in corporate and marketing history. Although Coca-Cola maintains that the idea of changing the traditional formula was an “intelligent risk,” most would agree that it was a risk, but seriously question whether it was intelligent. It is also most likely that Coca-Cola would never take this type of risk again.

At this point, you are probably wondering what is the purpose of relating this tale out of corporate American history, so I will cut to the chase. The similarities between the thought and actions of the Coca-Cola company in the spring and summer of 1985 bear a frighteningly strong resemblance to the Roman Catholic Church’s change in its liturgical practice following the Second Vatican Council.

Did you miss this article the first time around?  It appeared in The Remnant back in 2012. Subscribe today!


As many are aware, following the Council, a group of experts was established to implement the Decree on the Sacred Liturgy (Sacrosanctum concilium). This group, called the Concilium, took the liturgy of the Church, which had remained substantially unchanged for close to 1500 years, and developed a new product (the Novus Ordo Missae or New Mass) which they believed would better suit the taste of modern man. They had some “taste-tests” and found that many in their test groups liked it – though a rather significant number did not. In any case, they moved ahead with the change and introduced, under the authority of Pope Paul VI, the New Mass in Advent of 1969 and effectively removed the “old” product from the shelves (though, as Pope Benedict XVI has reminded us, the “old” Mass was never abrogated). Following the introduction of the New Mass, there was a strong storm of protest from many quarters, while many Catholics were left asking why change in the first place.

This is, unfortunately, where the similarities between Coca-Cola and the Church come to an end. While Coca-Cola realized that they had gone too far in changing the venerable traditional formula, the Roman Catholic Church (at least in the words and actions of most of its hierarchy and clergy) just ignored or tried to suppress those who complained that they wanted the Traditional Latin Mass. These folk were often ridiculed for making comments similar to the Coke protesters: "We want the real thing" and "Our children will never know refreshment.”

Over the past 40 or so years, the protests have not dimmed, but the ridicule and oppression of those seeking the Traditional Mass has not abated (Pope Benedict’s Summorum Pontificum not withstanding). This would be understandable if the New Mass had accomplished what it was formulated to do: to increase the faith and devotion of Catholics and make the faith clearer to the modern Catholic. Unfortunately the opposite has occurred: the number of Catholics attending the New Mass has steadily declined, as have vocations to the priesthood and religious life, not to mention the knowledge of the faith amongst the vast majority of Catholics who still attend Mass weekly.

Would you not think that presented with these facts, the Church’s hierarchy would take a look at the value of the “new formula” and start asking themselves whether this experiment was a failure on most every level? Instead, we are continually told that the problem is not with the product, but rather with how it is marketed or how it is consumed (to use corporate images). In terms more ecclesiastical, we are told that the Novus Ordo Missae isn’t the problem, but it was implemented badly in the 1970s or that those who regularly ignored the rubrics have caused the Novus Ordo Missae to not bring about the expected fruits. There is no way under God’s heavens that the Novus Ordo Missae is at fault, we are told ad nauseum.

It took Coca-Cola executives only 79 days to realize that they had made a mistake, and this before there was any appreciable decline in their sales or market share. Why, oh why, has the hierarchy of the Catholic Church, after 40 years of declining numbers in almost every measurable category and appearing, at least in the United States, more and more like a corporation, not begun to ask themselves whether the problem might just be with the product and not the consumer?
Published in Traditional Catholic Answers
back to top
Read 11691 times Last modified on Tuesday, December 9, 2014
Tweet

More in this category: « What’s Wrong with Communion in the Hand? Do Indulgences Turn Grace Into “Merchandise?” »