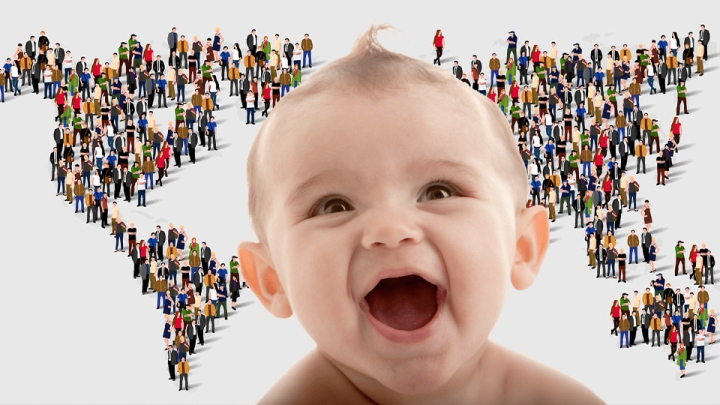 In between Veteran’s Day and trying to find a Thanksgiving Day turkey under $50, the 8th billion resident on this third rock from the sun was born.  Many claim this unprecedented number that has been on the horizon is proof that time is setting rather than rising on humanity.

At Christmas two millennia ago, the world’s population was about 300 million. Fast forward to 1804 when it topped one billion. Humanity has more than quadrupled since the turn of the 20th century, yet humankind is blooming in spite of its fallen nature thanks to better accessibility to food and medicine. United Nations demographers predict it will take 15 years to reach nine billion, and then 10 billion should arrive in the late 2050s.

With the green cult taken to its logical finale, the only way to eradicate our impact on planet Earth is the abolition of humanity itself.

This news is making leftists’ heads explode, believing as they do that overpopulation is going to do us in, just like climate change and before that the second coming of a global ice age. With the green cult taken to its logical finale, the only way to eradicate our impact on planet Earth is the abolition of humanity itself.

There are those that understand earth’s eighth billionth person as an unfolding tragedy of epic proportion – equivalent to an asteroid striking the planet, and unleashing more people. Some adhere to the philosophy that childlessness is vogue, even virtuous.

Leftists' never-ending cry of disaster at every turn rings empty. In 1968, Paul Erlich wrote in his bestseller, The Population Bomb, “The battle to feed all of humanity is over. In the 1970s hundreds of millions of people will starve to death in spite of any crash programs embarked upon now.”

Leftism’s hypocrisy extends from population control to pontificating about the evils of fossil fuels, while living a jetsetter lifestyle preaching their pablum they refuse to follow. Over the last two decades, carbon emissions from the U.S. and Europe have slowly declined, while improved efficiency and sustainability will allow the rest to follow.

The Leftist/woke revolution is not science as the truth contradicts its historical assumptions. It is nothing short of a pseudo religion with its own apocalypse, atonement and salvation. Their edicts rely not on factual data, but hypotheses avowed through government mandate.

Leftism’s hypocrisy extends from population control to pontificating about the evils of fossil fuels, while living a jetsetter lifestyle preaching their pablum they refuse to follow.

Humanity has never been healthier, wealthier, and better fed in spite of everything the Left has done via executive orders and in Congress. Too often existential threats are exaggerated beyond reproach. The reality is reasonable suppositions can lead to very different venues.

Free market forces and sociological changes have enhanced health and prosperity and debunked the Malthusian principle where humanity would outpace the world food supply resulting in disease, famine and calamity. Two centuries ago, Thomas Malthus never imagined the technological advances that allows humanity to feed, clothe, and house itself.

Too often humanity’s ability to innovate, adapt, and overcome adversity or resource scarcity without the need for authoritarian central planning is simply dismissed. Resources are finite, but technological advances are not and allows humanity to do more with less or find suitable replacements. Scholarship, fueled by capitalism, growth and faith is a potent and productive arrangement.

Humanity’s real threat is not overpopulation but a collapsing one. It takes a birthrate of 2.1 to maintain a population. In no Western nation is the fertility rate that high. The American birthrate has fallen 20% since 2007 and stands at 1.6.  Even China’s birthrate is below replacement at 1.7 – the same holds true for the Third World.

Humanity’s real threat is not overpopulation but a collapsing one.

The population will shrink faster than projected because, among other things, present consumption is valued over future consumption, while social safety nets and technological progress are dismissed. Tax legislation should encourage children as global debt burdens are financed based on growth projections. Spending rather than saving and cultivating for the future in the form of children is a deprived economic paradigm.

It was the Psalmist who proclaimed more than two millennia ago that “children are an inheritance from the Lord.” Leftists dismiss this at their own peril failing to appreciate how children mean more enterprise, progress and especially hope that improves everyone’s economic fortunes.

Latest from RTV — WHAT’S NEXT? (The G20 Summit & Future Lockdowns)