NY SUPREME COURT: "Being vaccinated does not prevent contracting or transmitting COVID-19" 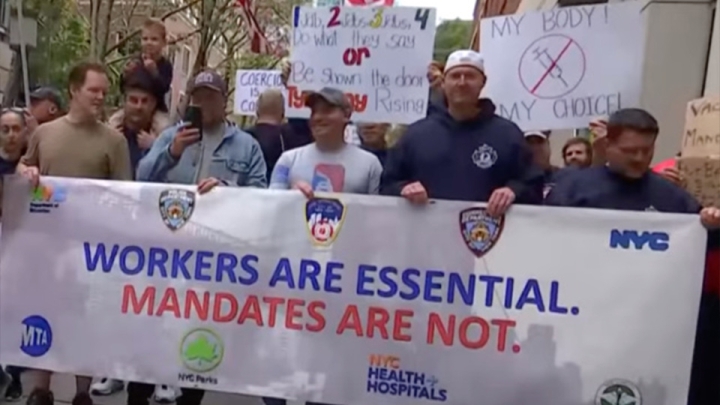 FoxNews | The New York state Supreme Court has reinstated all employees who were fired for not being vaccinated, ordering back pay and saying their rights had been violated.

The court found Monday that "being vaccinated does not prevent an individual from contracting or transmitting COVID-19." New York City Mayor Eric Adams claimed earlier this year that his administration would not rehire employees who had been fired over their vaccination status.

Many of those fired were police officers and firefighters.

Read the rest at FoxNews

Latest from RTV — GLOBALISM'S EXORCISM: Why These US Midterms Matter

[Comment Guidelines - Click to view]
The Remnant values the comments and input of our visitors. It’s no secret, however, that trolls exist, and trolls can do a lot of damage to a brand. Therefore, our comments are heavily monitored 24/7 by Remnant moderators around the country.  They have been instructed to remove demeaning, hostile, needlessly combative, racist, Christophobic comments, and streams not related to the storyline. Multiple comments from one person under a story are also discouraged. Capitalized sentences or comments will be removed (Internet shouting).
The Remnant comments sections are not designed for frequent personal blogging, on-going debates or theological or other disputes between commenters. Please understand that we pay our writers to defend The Remnant’s editorial positions. We thus acknowledge no moral obligation whatsoever to allow anyone and everyone to try to undermine our editorial policy and create a general nuisance on our website.  Therefore, Remnant moderators reserve the right to edit or remove comments, and comments do not necessarily represent the views of The Remnant.
back to top
Last modified on Wednesday, October 26, 2022
Tweet
More in this category: « Archbishop Chaput: Biden has excommunicated himself NEW RTV: Pfizer Calls for Annual Covid Jab »