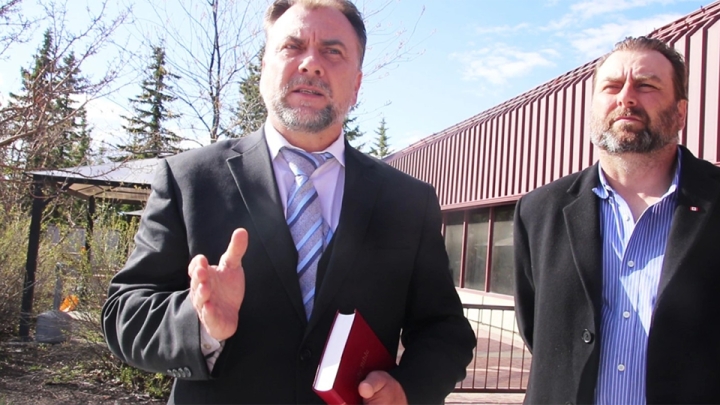 CALGARY, Alberta — An appeals court [on Friday, July 22] nullified contempt charges  against Alberta pastor Artur Pawlowski and his brother Dawid for protesting COVID health rules, ruling that a “not sufficiently clear” May 2021 ban on virus protests did not apply to them.

In essence, the judges ruled that Pawlowski and his brother’s jail time, arrests, and charges along with the censorship mandate by the court were not valid.

The Pawlowskis made international headlines after they were arrested in a highway takedown in May 2021 for holding worship services contrary to Alberta’s COVID rules affecting church service capacity limits. The Pawlowskis  served three nights in jail before being released on bail.

They were jailed under a court injunction dated May 6, 2021, by Alberta Chief Justice J. Rooke, who placed a ban on “illegal” protests in Alberta against COVID mandates.

Today, the appeals panel ruled that Rooke’s injunction “was not sufficiently clear and unambiguous.”

The judges wrote, “The legal issue before us, however, as before the chambers judge, is whether the injunction applied to the Pawlowskis such that they could be found in contempt of it. Without condoning the actions of the Pawlowskis, we turn to that question.”

“This is a victory for free speech, freedom of religion, and civil liberties in Canada. Pastor Artur Pawlowski is free. The Alberta Court rules that his prosecution and unfair treatment are illegal. Important win for Canada,” tweeted Rebel News content editor William Diaz-Berthiaume.

“You were and always will be on the right side of history,” he added.

Jamie Salé, gold medal pairs figure skating champion who recently spoke out on her “awakening” to combat the COVID narrative, tweeted, “The TRUTH WINS again in the case of Art P!!!”

Latest from RTV — RESIDENTIAL SCHOOLS: Francis in Canada and the Rest of the Story

[Comment Guidelines - Click to view]
The Remnant values the comments and input of our visitors. It’s no secret, however, that trolls exist, and trolls can do a lot of damage to a brand. Therefore, our comments are heavily monitored 24/7 by Remnant moderators around the country.  They have been instructed to remove demeaning, hostile, needlessly combative, racist, Christophobic comments, and streams not related to the storyline. Multiple comments from one person under a story are also discouraged. Capitalized sentences or comments will be removed (Internet shouting).
The Remnant comments sections are not designed for frequent personal blogging, on-going debates or theological or other disputes between commenters. Please understand that we pay our writers to defend The Remnant’s editorial positions. We thus acknowledge no moral obligation whatsoever to allow anyone and everyone to try to undermine our editorial policy and create a general nuisance on our website.  Therefore, Remnant moderators reserve the right to edit or remove comments, and comments do not necessarily represent the views of The Remnant.
back to top
Last modified on Sunday, July 24, 2022
Tweet
More in this category: « Reality Checking the Recent RealClear/EWTN Survey of “Catholic Mood” about the Midterms Clearing the Ledger »