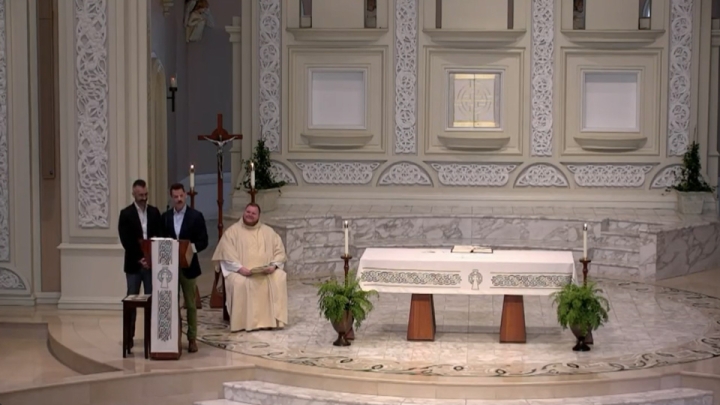 (The Pillar) As the Archdiocese of Chicago calls for "liturgical orthodoxy" in its implementation of Traditiones custodes, at least one parish has permitted lay people to give a homiletic reflection, despite the Church's requirements that a homily be given at Sunday Mass, and that homilies can be preached only by ordained ministers.

The Archdiocese of Chicago declined to comment on liturgical and doctrinal questions concerning a June 19 Mass at Chicago’s Old St. Patrick’s Church.

Instead of a homily after the Gospel, the celebrant invited two men to the ambo to offer a Father’s Day “Gospel reflection,” which the priest said was a custom in the parish.

The two men - identified as Alex Shingleton and Landon Duyka - described as “miracles” their same-sex civil marriage and the adoption of two daughters, comparing those moments to the multiplication of the loaves and fishes in the Gospel reading.

“This week Chicago is celebrating Pride, and today is Father’s Day, and conveniently we tick both of those boxes,” one of the men said, to laughter from the congregation.

“Let’s be honest, there are probably not too many gay dads speaking on Father’s Day at many Catholic Churches on the planet today.”

During their reflection, the men said they had felt unwelcome at other Catholic churches over the years, but were impressed by St. Patrick’s message of “radical inclusivity.”

They recalled attending an LGBT meeting when they first came to the parish, at which they recalled a priest saying that “that while other Catholic churches and their leaders may be tone deaf, Old St. Pat’s has figured it out.”

“Today we had the Gospel where Jesus fed the masses from five loaves and two fishes - clearly a miracle. Something that is unexplainable, unexpected, and truly marvelous, where something that started small became a huge blessing,” Shingleton said.

“Well, our journey to fatherhood has been marked by a series of events that started small, but became huge blessings. And while they may not meet the strict definitions of miracles - meaning no one will be gaining sainthood here today - they are unexplainable, unexpected, and truly marvelous nonetheless.”

[Comment Guidelines - Click to view]
The Remnant values the comments and input of our visitors. It’s no secret, however, that trolls exist, and trolls can do a lot of damage to a brand. Therefore, our comments are heavily monitored 24/7 by Remnant moderators around the country.  They have been instructed to remove demeaning, hostile, needlessly combative, racist, Christophobic comments, and streams not related to the storyline. Multiple comments from one person under a story are also discouraged. Capitalized sentences or comments will be removed (Internet shouting).
The Remnant comments sections are not designed for frequent personal blogging, on-going debates or theological or other disputes between commenters. Please understand that we pay our writers to defend The Remnant’s editorial positions. We thus acknowledge no moral obligation whatsoever to allow anyone and everyone to try to undermine our editorial policy and create a general nuisance on our website.  Therefore, Remnant moderators reserve the right to edit or remove comments, and comments do not necessarily represent the views of The Remnant.
back to top
Last modified on Wednesday, June 22, 2022
Tweet
More in this category: « "Young Globalist Leader" Macron Loses Legislative Majority as French Push Back Omicron Proven to be Best Defense Against COVID »