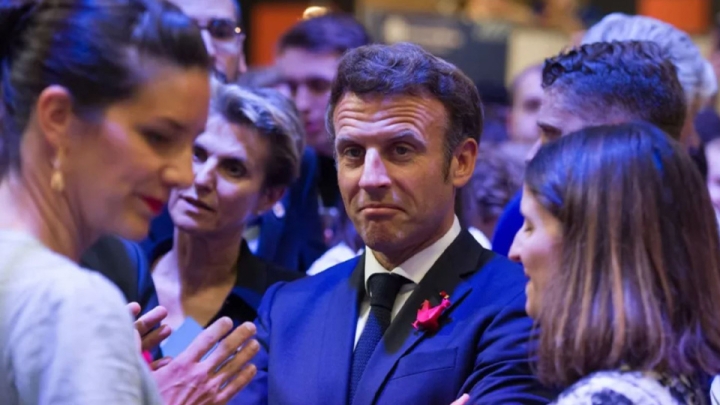 (Bloomberg) -- President Emmanuel Macron made history in the French legislative elections on Sunday, just not in the way he hoped.

The 44-year-old centrist became the first president in decades to fail to garner an absolute majority in parliament, falling short of the 289-seat threshold.

Macron’s alliance won 245 seats. The second-largest group in parliament is Nupes, a leftist coalition led by Jean-Luc Melenchon, which gets 131 lawmakers. The far-right National Rally fared much better than expected with 89 seats, while the center-right Republicans and their allies took 61.

The president’s cabinet will also be shuffled. Three ministers failed to be elected and officials in Macron’s office have previously said anyone in that position would have to relinquish their jobs.

Michael Matt's latest Remnant Underground points out that Macron has lifted the Covid vaccine, mask, and testing mandates. Who saw THAT coming six months ago!

Why is this happening? Because Klaus Schwab's Young Globalist Leader is no longer young, he's a terrible leader, and Globalism is becoming a political liability:

[Comment Guidelines - Click to view]
The Remnant values the comments and input of our visitors. It’s no secret, however, that trolls exist, and trolls can do a lot of damage to a brand. Therefore, our comments are heavily monitored 24/7 by Remnant moderators around the country.  They have been instructed to remove demeaning, hostile, needlessly combative, racist, Christophobic comments, and streams not related to the storyline. Multiple comments from one person under a story are also discouraged. Capitalized sentences or comments will be removed (Internet shouting).
The Remnant comments sections are not designed for frequent personal blogging, on-going debates or theological or other disputes between commenters. Please understand that we pay our writers to defend The Remnant’s editorial positions. We thus acknowledge no moral obligation whatsoever to allow anyone and everyone to try to undermine our editorial policy and create a general nuisance on our website.  Therefore, Remnant moderators reserve the right to edit or remove comments, and comments do not necessarily represent the views of The Remnant.
Last modified on Monday, June 20, 2022