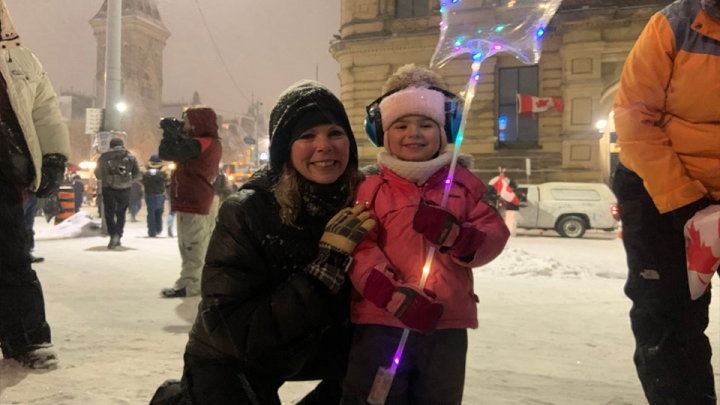 Tamara Lick and daughter in Ottawa during the Freedom Convoy

CTV News, Ottawa, is reporting that Tamara Lich, a high-profile organizer of the ‘Freedom Convoy’ protest, has been released from jail following a bail review.

An Ontario judge ruled Monday that the previous judge who denied Lich bail made errors in law. The Alberta resident was released on $25,000 in bonds and must leave Ottawa within 24 hours and Ontario within 72 hours.

Lich was arrested Feb. 17 and remained in custody after initially being denied bail. Lich spearheaded a GoFundMe campaign to raise money for the convoy, which was shut down after raising more than $10 million. The Medicine Hat, Alta. native is charged with counselling to commit mischief.

Justice John Johnston said in his decision that in denying Lich bail two weeks ago, Justice Julie Bourgeous erred when weighing the seriousness of Lich's charges by comparing them to the seriousness of the impact of the "Freedom Convoy" and not to other criminal code offences.

Lich, 49, Johnston noted, had lived a "pro-social" life prior to these charges and had no criminal record, suggesting that these factors may be grounds for a lighter sentence, should Lich be convicted. Johnston was concerned that Lich could spend more time in pre-trial custody than a sentence might deliver.

Lich must abide by several conditions. She must leave Ottawa within 24 hours of her release from custody and must leave Ontario within 72 hours, keeping in contact with the Ottawa Police Service daily as she returns to Alberta. She may not return to Ontario except to attend court or to meet with her lawyers, and she must inform Ottawa police if and when she returns to the province.

Lich is also prohibited from accessing or using social media, or having anyone use it on her behalf. She also cannot attend or engage in any future protests of COVID-19 mandates. Lich's surety must have easy and regular access to her electronic devices to ensure this. She is also prohibited from being in contact with several other organizers or leaders of the convoy movement.

During last week's bail review, an argument was put forward in regard to the previous judge who denied Lich bail. Lich argued that had she known of Justice Julie Bourgeois's unsuccessful run as a federal Liberal Party candidate in 2011, she would have asked Bourgeois recuse herself because the "Freedom Convoy" was a protest against the current Liberal government.

On Monday, Johnston said he found no evidence that a federal Liberal candidacy more than a decade ago was proof of bias and rejected the argument, cautioning that such allegations are serious and should come with strong evidence.

Over the weekend, several pro-convoy demonstrators protested outside the Ottawa-Carleton Detention Centre, demanding Lich's release, as well as the release of other convoy organizers who remain in custody.

Michael Matt on the Ukraine situation — THE ERRORS of GLOBALISM: Russia, Ukraine, and the Suicide of the West

[Comment Guidelines - Click to view]
The Remnant values the comments and input of our visitors. It’s no secret, however, that trolls exist, and trolls can do a lot of damage to a brand. Therefore, our comments are heavily monitored 24/7 by Remnant moderators around the country.  They have been instructed to remove demeaning, hostile, needlessly combative, racist, Christophobic comments, and streams not related to the storyline. Multiple comments from one person under a story are also discouraged. Capitalized sentences or comments will be removed (Internet shouting).
The Remnant comments sections are not designed for frequent personal blogging, on-going debates or theological or other disputes between commenters. Please understand that we pay our writers to defend The Remnant’s editorial positions. We thus acknowledge no moral obligation whatsoever to allow anyone and everyone to try to undermine our editorial policy and create a general nuisance on our website.  Therefore, Remnant moderators reserve the right to edit or remove comments, and comments do not necessarily represent the views of The Remnant.
Last modified on Tuesday, March 8, 2022