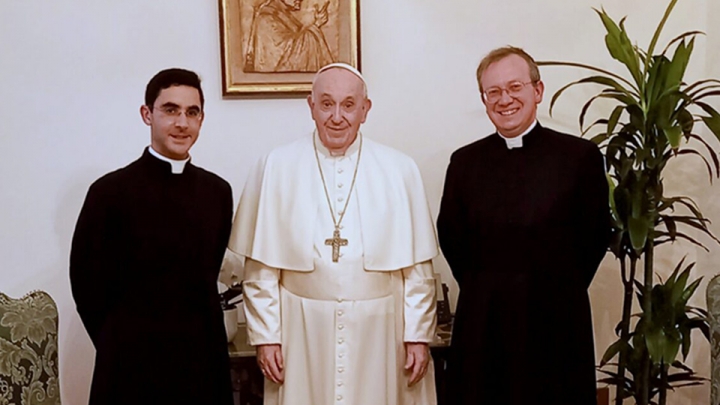 Good News out of the Fraternity of St. Peter
(See full report below)

Editor's Note: Thanks to the Fraternity of St. Peter's principled and respectful public resistance to Traditionis Custodes, we see once again that resistance is obviously NOT futile. It goes without saying, but we must keep resisting Francis to his face, as he has made his position contra tradition  abundantly clear.  Any degree of damage control, or any attempt to corral tradition on the part of the Vatican will continue to be met with principled resistance. Francis' betrayal of Tradition in his motu proprio has made it so that giving him the benefit of the doubt in this regard is no longer prudent. May God continue to bless and protect the FSSP. MJM

Fribourg, February 21, 2022 |  On Friday, February 4, 2022, two members of the Priestly Fraternity of St. Peter, Fr. Benoît Paul-Joseph, Superior of the District of France, and Fr. Vincent Ribeton, Rector of St. Peter’s Seminary in Wigratzbad, were received in private audience by the Holy Father, Pope Francis, for nearly an hour.

During the very cordial meeting, they recalled the origins of the Fraternity in 1988, the Pope expressed that he was very impressed by the approach taken by its founders, their desire to remain faithful to the Roman Pontiff and their trust in the Church. He said that this gesture should be “preserved, protected and encouraged”.

In the course of the audience, the Pope made it clear that institutes such as the Fraternity of St. Peter are not affected by the general provisions of the Motu Proprio Traditionis Custodes.

In the course of the audience, the Pope made it clear that institutes such as the Fraternity of St. Peter are not affected by the general provisions of the Motu Proprio Traditionis Custodes, since the use of the ancient liturgical books was at the origin of their existence and is provided for in their constitutions.

The Holy Father subsequently sent a decree signed by him and dated February 11, the day the Fraternity was solemnly consecrated to the Immaculate Heart of Mary, confirming for the members of the Fraternity the right to use the liturgical books in force in 1962, namely: the Missal, the Ritual, the Pontifical and the Roman Breviary.

Grateful to the Holy Father, the members of the Fraternity of St. Peter are in thanksgiving for this confirmation of their mission. They invite all the faithful who feel close to them as a spiritual family to attend or join them in prayer at the Mass tomorrow, on the feast of the Chair of St. Peter, and to pray for the Supreme Pontiff.

[Comment Guidelines - Click to view]
The Remnant values the comments and input of our visitors. It’s no secret, however, that trolls exist, and trolls can do a lot of damage to a brand. Therefore, our comments are heavily monitored 24/7 by Remnant moderators around the country.  They have been instructed to remove demeaning, hostile, needlessly combative, racist, Christophobic comments, and streams not related to the storyline. Multiple comments from one person under a story are also discouraged. Capitalized sentences or comments will be removed (Internet shouting).
The Remnant comments sections are not designed for frequent personal blogging, on-going debates or theological or other disputes between commenters. Please understand that we pay our writers to defend The Remnant’s editorial positions. We thus acknowledge no moral obligation whatsoever to allow anyone and everyone to try to undermine our editorial policy and create a general nuisance on our website.  Therefore, Remnant moderators reserve the right to edit or remove comments, and comments do not necessarily represent the views of The Remnant.
back to top
Last modified on Tuesday, February 22, 2022
Tweet
More in this category: « “The Return of Humanity”: Antiglobalist World Alliance for Human Sovereignty Launches Two Major Manifestos against Globalist Tyranny Canadian Truckers Win, Trudeau Exposed! »