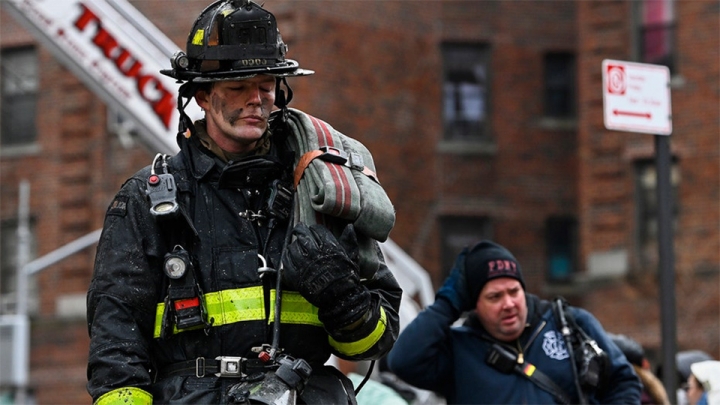 I am writing this open letter in charity and with the utmost respect, in the hopes that you will have a change of heart and step into the breach by publicly supporting the NYC police officers, firefighters and EMTs who are now about to be terminated by Mayor Eric Adams, not for any malfeasance on their part, but for failing to obey an unjust and tyrannical mandate requiring that they be injected against their will with an experimental gene therapy, which we are well aware was derived from aborted fetal tissue cells.

As you may recall I wrote to you last November and I respectfully reminded you that while Churches were closed and we were denied the sacraments, NYC Police Stations, Firehouses, and Emergency Medical Divisions remained opened – despite our own staffing issues caused by this pandemic. And then while you dined at a $5,000 a plate “Al Smith Dinner” with the mayor who unilaterally implemented these tyrannical mandates, Bill DeBlasio, the cops, firefighters, and EMTs who were working courageously throughout the pandemic at great risk to not only themselves but to their families as well, were being placed on leave without pay, unable now to provide for their families. Governor Hocul was also in attendance at this gala, right after she sent forth her newly found “apostles for the cause”, a month earlier in a Brooklyn Church, instructing them to go forth and preach the “gospel of the vaccine”.

When brave first responders, a majority of them Roman Catholic opposed to this injection solely on its connection to aborted fetal cells, sought your help, you had already preemptively undermined their efforts by ordering the priests of the Archdiocese of New York not to issue documentation supporting religious exemptions requests.

Her own mandates deserve to be redressed as well as they too are causing unspeakable harm, most especially to school children. I see it in their faces when I instruct them in my 8th Grade Religious Formation class.

And then when many of these brave first responders, a majority of them Roman Catholic opposed to this injection solely on its connection to aborted fetal cells, sought your help, you had already preemptively undermined their efforts by ordering the priests of the Archdiocese of New York not to issue documentation supporting religious exemptions requests, citing the Vatican’s “Note on the morality of using some anti-covid-19 vaccines”. Unfortunately, relying on only a portion of that note, you failed to acknowledge the following, “At the same time, practical reason, makes evident that vaccination is not, as a rule, a moral obligation and that, therefore, it must be voluntary” (emphasis mine)

As I was recently forced to retire myself from the FDNY because of this very same mandate, I now publicly plead with your Eminence, on behalf of these courageous men and women, and not only for their sake, but for the sake of our nation and for The Church, to hasten to their aid and take a public stand on their behalf.

Now I fully understand that the issuance of religious exemptions should never be taken for granted and that there should be strict guidelines when issuing any document which is tantamount to an oath. So, while I would never have expected a “rubber stamped” document to come from your chancery either, but by directing the spiritual fathers of your parishes not to come to the aid of their flock, you have in effect “given your child who asks for bread, a stone” (Matthew 7:9-10)

As the Archbishop of New York, you have sadly on many occasions celebrated the sacrifice of the Holy Mass for fallen members of both the Fire and Police Departments, and I am quite sure at some point during every single one of those Masses you hear, whether its mentioned by the homilist or an opportunist politician that oft quoted line, “We will never forget”, and rightfully so, but aren’t we now willfully and contemptuously “forgetting” these members who are about to be fired without good cause? And none of us has the luxury to sit by idly and watch these good people get fired without taking some kind of immediate action against this insanity.

The lack of transparency from government officials has created a vacuum of moral leadership. We need all your brother Bishops to step onto this battlefield and engage in this fight as well. Lead the way Bishops, and I promise we will follow.

As I was recently forced to retire myself from the FDNY because of this very same mandate, I now publicly plead with your Eminence, on behalf of these courageous men and women, some of whom I have had the honor to serve with, and not only for their sake, but for the sake of our nation and for The Church, to hasten to their aid and take a public stand on their behalf. And with the deadline for termination quickly approaching any action that you can take in support of these families will hopefully have a positive impact on the overall outcome, and not only here in NYC, but across the nation as well, where other first responders are at risk of losing their livelihoods due to these same evil mandates. And although it may not be the exact outcome we hope for, your active involvement alone would be very encouraging news to the faithful nonetheless.

While these past two years have definitely been a physical, emotional and spiritual strain for all of us, and the lack of transparency from government officials, both elected and bureaucratic, has done nothing to alleviate these burdens either, it has however created a vacuum of moral leadership. And as the pandemic wanes it is imperative that we fill that void quickly as its clear to everyone paying attention that this spiritual battle has ramped up at warp speed and we are in desperate need of generals, as we already have plenty of privates. And we need all your brother Bishops to step onto this battlefield and engage in this fight as well. Lead the way Bishops, and I promise we will follow.

As members of the Church-Militant, we have our own Christian mandate if you will, a mandate to defend Truth by putting “on the full armor of God” (Ephesians 6:11), a mandate that each of us received at the baptismal font, and if we step into that breach, we will be able to say like Saint Paul, that we “fought the good fight” (2 Timothy 4:7) and stood up to evil and defended Truth, and even if we lose this particular battle, this spiritual war, which began at The Fall, is far from over, but we all know who the Victor is …

You remain in my prayers,

-This article first appeared at LifeSiteNews

[Comment Guidelines - Click to view]
The Remnant values the comments and input of our visitors. It’s no secret, however, that trolls exist, and trolls can do a lot of damage to a brand. Therefore, our comments are heavily monitored 24/7 by Remnant moderators around the country.  They have been instructed to remove demeaning, hostile, needlessly combative, racist, Christophobic comments, and streams not related to the storyline. Multiple comments from one person under a story are also discouraged. Capitalized sentences or comments will be removed (Internet shouting).
The Remnant comments sections are not designed for frequent personal blogging, on-going debates or theological or other disputes between commenters. Please understand that we pay our writers to defend The Remnant’s editorial positions. We thus acknowledge no moral obligation whatsoever to allow anyone and everyone to try to undermine our editorial policy and create a general nuisance on our website.  Therefore, Remnant moderators reserve the right to edit or remove comments, and comments do not necessarily represent the views of The Remnant.
back to top
Last modified on Friday, February 4, 2022
Tweet
More in this category: « "Life as We Knew It": Denmark Follows Brexit, Lifts All COVID Mandates Michael Matt Interviews Original Parking Lot Priest »