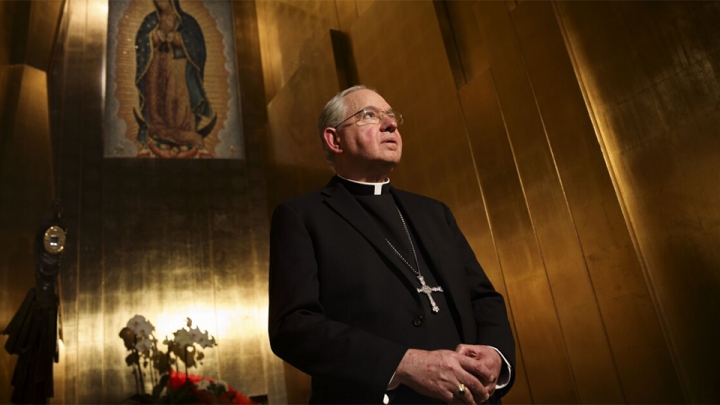 In a powerful address to the Congress on Catholics and Public Life in Madrid, Archbishop Gomez said Thursday that “an elite leadership class has risen in our countries that has little interest in religion and no real attachments to the nations they live in or to local traditions or cultures.”

“This group, which is in charge in corporations, governments, universities, the media, and in the cultural and professional establishments, wants to establish what we might call a global civilization.”

“In this elite worldview, there is no need for old-fashioned belief systems and religions... In fact, as they see it, religion, especially Christianity, only gets in the way of the society they hope to build.”

“I think we all know that while there are unique conditions in the United States, similar broad patterns of aggressive secularization have long been at work in Spain and elsewhere in Europe.”

In his critique of “cancel culture” and “political correctness,” Gomez said that “often what is being canceled and corrected are perspectives rooted in Christian beliefs — about human life and the human person, about marriage, the family, and more.”

In modern society, “The ‘space’ that the Church and believing Christians are permitted to occupy is shrinking,” he lamented. “Church institutions and Christian-owned businesses are increasingly challenged and harassed.”

“The same is true for Christians working in education, health care, government, and other sectors... Holding certain Christian beliefs is said to be a threat to the freedoms, and even to the safety, of other groups in our societies.”

The project of radical secularization, which is anti-Christian in its roots, has accelerated during the coronavirus pandemic.

“I think history will look back and see that this pandemic did not change our societies as much as it accelerated trends and directions that were already at work... Social changes that might have taken decades to play out are now moving more rapidly in the wake of this disease and our societies’ responses.”

“The new social movements and ideologies that we are talking about today were being seeded and prepared for many years in our universities and cultural institutions. But with the tension and fear caused by the pandemic and social isolation, and with the killing of an unarmed black man by a white policeman and the protests that followed in our cities, these movements were fully unleashed in our society.”

“. . . political belief systems based on social justice or personal identity have come to fill the space that Christian belief and practice once occupied.”

“Whatever we call these movements — ‘social justice,’ ‘wokeness,’ ‘identity politics,’ ‘intersectionality,’ ‘successor ideology’ — they claim to offer what religion provides. The architects of this movement seek to replace the Christian story with “what we might call the ‘woke’ story or the ‘social justice’ story.”

“Today’s critical theories and ideologies are profoundly atheistic,” Gomez observed. “They deny the soul, the spiritual, transcendent dimension of human nature; or they think that it is irrelevant to human happiness.”

Instead, they “reduce what it means to be human to essentially physical qualities — the color of our skin, our sex, our notions of gender, our ethnic background, or our position in society.” And he presented the Church's answer to the these crises:

“We should not be intimidated by these new religions of social justice and political identity. The Gospel remains the most powerful force for social change that the world has ever seen. And the Church has been “antiracist” from the beginning. All are included in her message of salvation.

“Of course, in the Church we have not always lived up to our beautiful principles, or carried out the mission entrusted to us by Christ. But the world does not need a new secular religion to replace Christianity. It needs you and me to be better witnesses. Better Christians.

“In the States, the Church is preparing to celebrate next month the 490th anniversary of the apparitions of Our Lady of Guadalupe, which marks the true spiritual founding of America.

“And already, we are seeing signs of an authentic religious awakening going on in America, underneath all the controversy of our politics, the continued clouds of the pandemic, all the uncertainty about where our country is heading.

“I am confident that we will see this spiritual awakening grow and spread in the coming decade, as we look ahead to the 500th anniversary of the apparition.

“And Our Lady’s words at Tepeyac continue to strengthen and inspire me: ‘Am I not here, I who am your Mother? Are you not in my shadow, under my protection?’”

[Comment Guidelines - Click to view]
The Remnant values the comments and input of our visitors. It’s no secret, however, that trolls exist, and trolls can do a lot of damage to a brand. Therefore, our comments are heavily monitored 24/7 by Remnant moderators around the country.  They have been instructed to remove demeaning, hostile, needlessly combative, racist, Christophobic comments, and streams not related to the storyline. Multiple comments from one person under a story are also discouraged. Capitalized sentences or comments will be removed (Internet shouting).
The Remnant comments sections are not designed for frequent personal blogging, on-going debates or theological or other disputes between commenters. Please understand that we pay our writers to defend The Remnant’s editorial positions. We thus acknowledge no moral obligation whatsoever to allow anyone and everyone to try to undermine our editorial policy and create a general nuisance on our website.  Therefore, Remnant moderators reserve the right to edit or remove comments, and comments do not necessarily represent the views of The Remnant.
back to top
Last modified on Monday, November 8, 2021
Tweet
More in this category: « CANCELLING TRADITION: Cupich Pledges Allegiance to "The Gift of Traditionis Custodes" SOS for Australia: Join the December 4th Event for Freedom and Democracy »