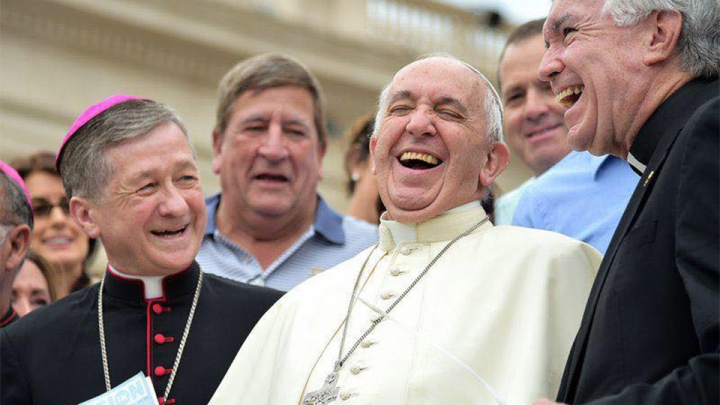 Remnant Editor's Note: The following letter, taken from PrayTellBlog.com, does not bode well for the future of the Traditional Latin Mass in Chicago. In fact, The Remnant has been asked by some of its followers to help sound the alarm.

In my opinion, Cardinal Cupich is an ambitious man, and while most bishops in this country are still scratching their heads at Francis's shakedown of one of the few growing movements in the Catholic Church today,  Cupich seems downright eager to enforce what some are calling the "Final Solution" where the liturgical revolution is concerned.  I would go so far are to suggest that we may be looking at the worst sycophant in the Church today reigning over what is left of the Catholic Church in Chicago, mandating vaccines, eradicating Tradition, and even accommodating notorious villains like McCarrick -- all in the name of winning papal favor and approval.

Readers will recall when Cupich awarded then-Cardinal Theodore McCarrick with the "Spirit of Francis" award shortly before all hell broke loose (hat tip to Archbishop Viganò). So I guess it should surprise no one that Cardinal Cupich will find himself one the wrong side of this one, too.  For those who may have missed it, here was Cupich then:

And here is Cupich now, God help us all:

The Gift of Traditionis Custodes

During a recent meeting with our priests in Chicago, I was asked about the motu proprio, Traditionis custodes (TC), recently issued by Pope Francis. They were curious about how the archdiocese would respond to it and what insights this document can offer all of us about the liturgy.

I think it is important to point out from the outset that a careful reading of the motu proprio reveals the Holy Father’s intention in issuing this document. Simply put, it is to re-establish throughout the Church of the Roman Rite a single and identical prayer that expresses its unity, according to the liturgical books promulgated by the saintly Popes Paul VI and John Paul II, in conformity with the decrees of the Second Vatican Council .[Emphasis added] In other words, there are not two forms of the Roman Rite, because the word “reform” means something, namely that we leave behind a former way of celebrating the sacraments and adopt a new form.

To put that word “reform” in perspective, just recall some of the other reforms following the Second Vatican Council, which we have witnessed in our days. In 1983, Pope John Paul II reformed the Code of Canon Law of 1917, in order to insure that Church Law conformed to the teachings of the Second Vatican Council. Likewise, the saintly pope in 1993 reformed the Catechism of the Catholic Church, again for the purpose of bringing it up-to-date in view of the theological insights of the Council. The way we worship was also reformed in view of the new self-understanding of the Church found in the dogmatic constitution Lumen Gentium and the theological and liturgical developments expressed in the Constitution on the Liturgy, Sacrosanctum Concilium. With the reforms of the Code and the Catechism, the Church left behind their earlier forms [Emphasis added]. No one would think of arguing that the earlier forms of the Code or the Catechism could still be used, simply because the word reform means something. And so, it has to mean something with regard to the liturgical reform.

With that starting point, Pope Francis offers three important guiding principles for receiving and implementing TC. The first is the unity of the Church. Archbishop Augustine DiNoia, Secretary of the Congregation for the Doctrine of the Faith made the observation in an interview with Cindy Wooden of Catholic News Service that “when St. John Paul and Pope Benedict expanded the possibility of using the pre-Vatican II Mass, they were hoping to promote unity in the church and to counter abuses that were widespread in the celebration of the post-Vatican II Mass.” This aspiration in granting the concession to use the earlier form of the liturgy was to heal the rift with members of the Society of St. Pius X, established by the late Archbishop Marcel Lefebvre. Sadly, however, that was not achieved. Instead the archbishop observed, “what we have got now is a movement within the church herself, seemingly endorsed by her leaders, that sows division by undermining the reforms of the Second Vatican Council through the rejection of the most important of them: the reform of the Roman Rite.”

A second guiding principle the pope addresses in TC is that there has to be a solid unequivocal recognition on the part of all Catholics that the Second Vatican Council and its reforms are not only an authentic action of the Holy Spirit but also are in continuity with the Tradition of the Church. In particular, this recognition means the full acceptance that “the liturgical books promulgated by Saint Paul VI and Saint John Paul II, in conformity with the decrees of Vatican Council II, are the unique expression of the lex orandi of the Roman Rite.” [1]

A third principle is the role of the bishop as the sole moderator, promoter and guardian of all liturgical life in his diocese. Pope Francis, by issuing TC,  has returned competency to the local bishop for the regulation of the use as an exceptional concession of the former liturgy. Consequently, each bishop is to decide if and when it may be opportune to grant by way of exception the use of rituals prior to the liturgical reforms of the Second Vatican Council liturgy (Missale Romanum of 1962 and Rituale Romanum of 1952). In his letter to bishops around the world to accompany the text of TC  Pope Francis makes clear that the local bishop is duty bound to take his decision in a way that promotes in his diocese a return to a unitary celebratory form.

Pastorally fulfilling the aims of TC will require that we as pastors accompany people in coming to an understanding of the link between the way we worship and what we believe,[2] keeping in mind the Holy Father’s desire that pastors are to lead the faithful to the sole use of the reformed liturgical books. Accompaniment may take the form of visiting with the faithful who have regularly attended Mass and celebrated sacraments with the earlier rituals to help them understand the essential principles of renewal called for in the Second Vatican Council. It must also involve helping people appreciate how the reformed Mass introduces them to a greater use of scripture and prayers from the Roman tradition, as well as an updated liturgical calendar of feasts that includes recently canonized saints. Accompaniment may also mean creatively including in the Mass reformed by the Council elements which people have found nourishing in celebrating the earlier form of the Mass, which has already been an option, e.g., reverent movement and gestures, use of Gregorian chant, Latin and incense, and extended periods of silence within the liturgy.

I believe that we can use this opportunity to help all of our people come to a fuller understanding of the great gift that the Council has given us in reforming the way we worship. I take seriously my obligation to move forward in a way that promotes a return to a unitary celebratory form in accord with the directives of TC, but in the meantime, we all need to pray, as Jesus did the night before he died, that all may be one.

Cardinal Blase Cupich is the archbishop of the Archdiocese of Chicago, Illinois.

[Comment Guidelines - Click to view]
The Remnant values the comments and input of our visitors. It’s no secret, however, that trolls exist, and trolls can do a lot of damage to a brand. Therefore, our comments are heavily monitored 24/7 by Remnant moderators around the country.  They have been instructed to remove demeaning, hostile, needlessly combative, racist, Christophobic comments, and streams not related to the storyline. Multiple comments from one person under a story are also discouraged. Capitalized sentences or comments will be removed (Internet shouting).
The Remnant comments sections are not designed for frequent personal blogging, on-going debates or theological or other disputes between commenters. Please understand that we pay our writers to defend The Remnant’s editorial positions. We thus acknowledge no moral obligation whatsoever to allow anyone and everyone to try to undermine our editorial policy and create a general nuisance on our website.  Therefore, Remnant moderators reserve the right to edit or remove comments, and comments do not necessarily represent the views of The Remnant.
back to top
Last modified on Monday, November 8, 2021
Tweet
More in this category: « Even Newsweek Has Had Enough: Fauci’s Fall From Grace Archbishop Gomez Blasts Globalist Elite, Social Justice and Pandemic-driven Reset »