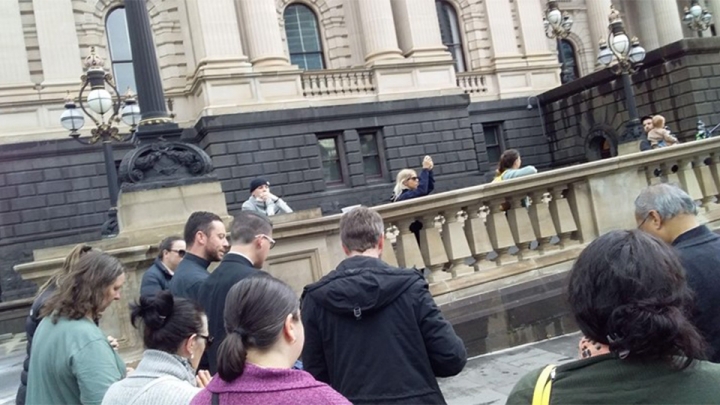 This is how Catholics fight tyranny: Public Rosaries in Melbourne’s CBD

A small group of Catholics joined thousands of protesters in Melbourne last Saturday to oppose a controversial new bill that has already been passed by one house of Victoria’s Parliament. Likened to the 1933 Enabling Act that facilitated Hitler’s rise to power, the proposed Victorian bill would, in the name of public health, give the Premier a range of sweeping powers, including the authority to detain citizens for up to two years.

The Catholic contingent had already gathered on several occasions outside Melbourne’s St Patrick’s Cathedral, protesting the vaccination-based segregation that has been enacted in many of the city’s parishes. With the passing of the first stage of the government’s emergency powers Bill, an amendment to the Public Health and Wellbeing Act 2020, the group decided to pray as planned then move on to join a Freedom Rally that was being held nearby on the same day.

Justin Beirouti, an organiser of the Catholic group, explained his motivation for arranging public Rosaries:

“As a Catholic Victorian citizen, I felt we needed to do something to unite us. The pandemic has taken a toll, especially in Melbourne - the most locked-down city in the world - as we have had no access to the sacraments. We have no concrete leadership among Australia’s hierarchy calling out the immoral government decisions regarding the abuse of power with the lockdowns and forcing the vaccines.

So when the going gets tough, we need to pray and the Rosary is the most powerful way of praying during a crisis. There have been many terrible events throughout history when people have come out to pray, and pray in large numbers. This is our time now.”

Many Catholics had been attending protests individually, but this was the first time that an organised group attended together. Three priests joined around sixty Catholics and together they prayed the Rosary outside Parliament House, where the Catholic presence was met with enthusiasm and respect. One of the priests, Fr Marcus Goulding, has been vocal on talk-back radio about opposing unjust government restrictions, encouraging the faithful to attend protests in order to make their concerns known and all three men have been trying to educate their parishioners about government overreach.

The Bill’s powers to detain have led many to speculate that a 1000-bed quarantine facility being built near Melbourne could potentially be used to house the Labor government’s political and ideological opponents.

The Bill was tabled in Parliament on late Tuesday evening, then was hurriedly debated on Wednesday and passed by the Lower House that same day. Many MPs had no prior notice of the contents of the lengthy bill, although rumors of its existence had been circulating for several months. The government claims there was wide consultation, including with the legal community, but the President of the Victorian Bar Society told the media that this was completely false. He added that the new laws were of grave concern because they would give the Health Minister “an effectively unlimited power to rule the State by decree, for an effectively indefinite period, and without effective judicial or parliamentary oversight.”[1]

Under the proposed law, the Premier will be able to bypass Parliament and the Chief Medical Officer to declare pandemic status whenever he deems there is sufficient risk posed by a transmissible illness. This means that a State of Emergency could be called with not even one case of a “disease of pandemic potential” detected in the State.

The Premier would then be able to extend his emergency powers in three-month blocks indefinitely and potentially disrupt or delay elections. He will be able to appoint delegates who can forcibly quarantine or detain anyone deemed a risk to public health, based on their vaccinations status, occupation or even their political affiliation.[2] Penalties for violating the new laws include fines of AUS $21,000 for failing to take a COVID test and a fine of up to AUS $450,000 for a business that discourages the QR-code check-in.

So far, mainstream Catholic media in Australia has had little to say about the Premier’s alarming new Bill, being content to push COVID vaccines and, in some cases, to promote compliance with government mandates.

The Bill’s powers to detain have led many to speculate that a 1000-bed quarantine facility being built near Melbourne could potentially be used to house the Labor government’s political and ideological opponents. In fact, as the state has been trialling at-home quarantine for returning travellers, an expensive new facility for outsourced quarantine is now unnecessary. Given that Catholics form a large percentage of those opposed to vaccines, it is not too far-fetched to imagine that dissenters could be sent to a detention centre based solely on their religious beliefs.

So far, mainstream Catholic media in Australia has had little to say about the Premier’s alarming new Bill, being content to push COVID vaccines and, in some cases, to promote compliance with government mandates. One commentator went so far as to accuse anti-COVAX Catholics of being “Catholic Amish”[3] while a pro-life speaker who is against mandates, but pro-vaccination, jokingly laughed the Astra-Zeneca drug off as a “clot shot”, saying, “jab me with anything you want if you think it will keep me from being sick.”[4]

The behaviour of the bishops has generally been even worse: several moved to stop publication of an open letter[5] from a group of Australian priests concerned about the morality of COVID vaccines. The seventy-five priests are also opposed to vaccine mandates and the letter expressed their fears for their parishioners who refuse to accept the experimental vaccines. The bishops claimed that the letter would be “divisive”; not a surprising conclusion as the priests’ stance contradicts the official party line of the Australian Catholic Bishops Conference: “trust the science” and get jabbed.

The organisers of the Rosary rally are asking Melbourne’s Catholics to write to their Archbishop, Peter Comensoli, at This email address is being protected from spambots. You need JavaScript enabled to view it., to respectfully ask him to end segregated Masses and to publicly condemn the Bill being put forward by Victoria’s “Catholic” Premier. The group plans to gather again on Saturday November 6th in even greater numbers, invoking the Patroness of Australia, Our Lady, Help of Christians. 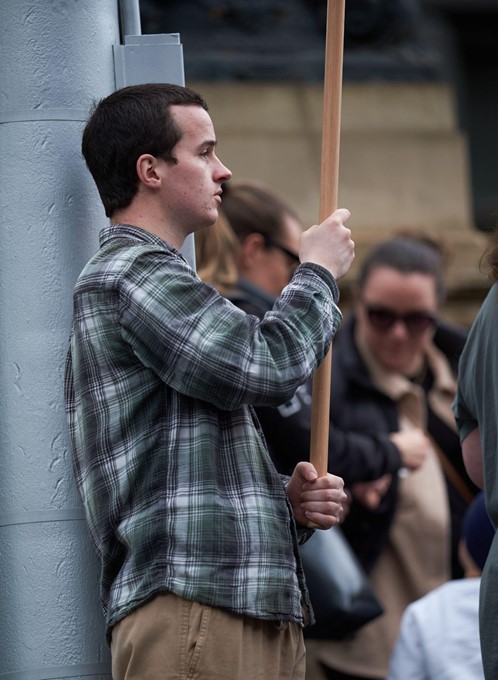 [Comment Guidelines - Click to view]
The Remnant values the comments and input of our visitors. It’s no secret, however, that trolls exist, and trolls can do a lot of damage to a brand. Therefore, our comments are heavily monitored 24/7 by Remnant moderators around the country.  They have been instructed to remove demeaning, hostile, needlessly combative, racist, Christophobic comments, and streams not related to the storyline. Multiple comments from one person under a story are also discouraged. Capitalized sentences or comments will be removed (Internet shouting).
The Remnant comments sections are not designed for frequent personal blogging, on-going debates or theological or other disputes between commenters. Please understand that we pay our writers to defend The Remnant’s editorial positions. We thus acknowledge no moral obligation whatsoever to allow anyone and everyone to try to undermine our editorial policy and create a general nuisance on our website.  Therefore, Remnant moderators reserve the right to edit or remove comments, and comments do not necessarily represent the views of The Remnant.
back to top
Last modified on Wednesday, November 3, 2021
Tweet

More in this category: « FSSP Reacts Immediately and Decisively to Arrest of Fr. Jackson Even Newsweek Has Had Enough: Fauci’s Fall From Grace »