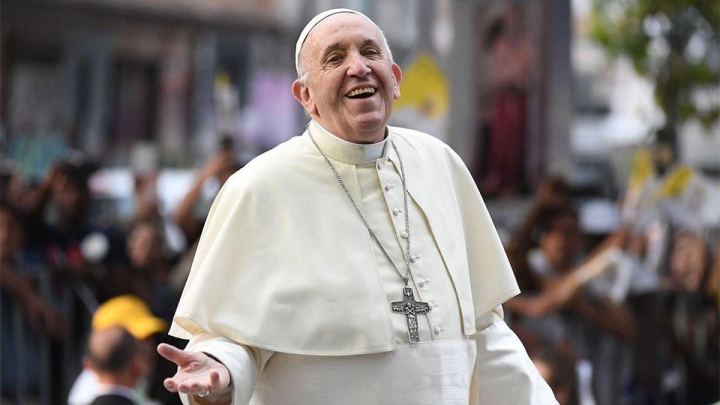 While some refer to Wednesday as “hump day.” For Pope Francis it seems as if Wednesday would be more appropriately referred to as harumph day.

Lately, traditional Catholics wait with bated breath for the pontiff’s Wednesday audience, curious to see what kind of “Get off my lawn, you pesky kids” scolding we receive each week.

True to form, this week, the Holy Father warned Catholics, “Beware of the rigidity they propose to you: be careful. Inflexibility does not come from the Spirit of God.”

It’s safe to assume that when the pontiff says, “they,” he’s referring to us - those annoying traditionalists who just won’t go away.

“Even today, people come and harangue us, saying, ‘No, holiness is in these precepts, in these things, you must do this and that,’ and propose an inflexible religiosity, the inflexibility that takes away from us that freedom in the Spirit that Christ’s redemption gives us,” he said.

That “freedom in the spirit” the Holy Father refers to is likely a nod to his pagan fixation on the Pachamama and Mother Earth.

We’re standing firm and for some reason that upsets the pope.

It’s true, Pope Francis is certainly entitled to a freedom of spirit. But when that spirit is contrary to Church teaching and a reckless endangerment of the faithful, they have the right to call him out — which by his definition is haranguing him.

You may recall that Cardinals Caffarra, Burke, Brandmüller, and Meisner asked for clarity on ‘Amoris Laetitia’ in 2016. They have yet to receive an answer.

Speaking of the Pachamama, the Holy Father received plenty of inquiries asking for an explanation on the Amazon Synod. These, too, have gone unanswered.

Instead, Pope Francis chooses to spend his time launching passive aggressive jabs from the Vatican’s Paul VI Hall, a structure which architecturally resembles a serpent — how appropriate.

The irony that Pope Francis’ weekly catechesis lately addresses the subject of fraternal correction and is centered on St. Paul’s Epistles to the Galatians does not go unnoticed. This week, as he added his own harshly linguistic and somewhat editorialized translation, the pope made it a point to say that the Scripture passage and its message came from St. Paul, not from him.

Let’s be honest - Pope Francis is no St. Paul.

The Holy Father bastardizes the words of the epistle, twisting them to fit his agenda, his obsession, his witch hunt against traditionalists. While Pope Francis warns the faithful to “beware of rigidity,” St. Paul, on the other hand, says “So then, brethren, stand firm and hold to the traditions which you were taught by us, either by word of mouth or by letter” (2 Thess. 2:15).

We’re standing firm and for some reason that upsets the pope. In fact, it upsets him so much that for the last few weeks the shepherd seems to be trying to force traditional Catholic sheep out of the sheepfold.

LATEST FROM REMNANT TV:  RESISTENCE IS NOT FUTILE: Cancelling The Great Reset

What is it about traditionalists that cause us to be the pope’s ire and obsession? Catholics, both traditional and non-traditional alike should be asking this question.

Why is that Francis is perfectly content with pagans, homosexuals, globalists, and ecumenists yet he has such disdain for traditionalists?

The Society of St. Pius X has been around since 1970. At no point in their history have they gone to Rome attempting some sort of coup at the Vatican. The Fraternity of St. Peter was founded in 1988 and has been working alongside dioceses harmoniously. Likewise, the Institute of Christ the King, founded in 1990, have gone about their work peacefully. Contrary to what Francis would like us to believe, there is not a single instance where one of the aforementioned or any other traditional group for that matter have harangued, proposed, or taken anything away from the Church.

Perhaps he isn’t comfortable being corrected and questioned when Catholics on solid footing observe his often questionable words and deeds. There are certainly those in the Church who inaccurately believe that we should never question the pope. This lack of solid catechesis among the faithful might also explain why only 30% of Catholics believe in the Real Presence.

In fact, it upsets him so much that for the last few weeks the shepherd seems to be trying to force traditional Catholic sheep out of the sheepfold.

“Fraternal correction is an act of charity,” de Mattei notes. “One of the gravest sins against charity is schism, which is separation from the authority of the Church, Her laws, uses and customs. Even a Pope can fall into schism, if he divides the Church.”

Thus, as long as Francis is obtuse, we will continue to ask questions.

Perhaps Catholics, traditional and non-traditional alike, should be asking a few more questions:

Eventually, history will provide the answer. Just as it has vindicated the reputations of Ottaviani, Lefebvre, de Castro Mayer.

In the meantime, traditional Catholics wait for next Wednesday.

Jeremy Dannebohm is a freelance writer and traditional Catholic. All too acquainted with controversy and attacks, Dannebohm is quick to defend those disenfranchised by the post-conciliar Church. He resides in the Carolinas.

[Comment Guidelines - Click to view]
The Remnant values the comments and input of our visitors. It’s no secret, however, that trolls exist, and trolls can do a lot of damage to a brand. Therefore, our comments are heavily monitored 24/7 by Remnant moderators around the country.  They have been instructed to remove demeaning, hostile, needlessly combative, racist, Christophobic comments, and streams not related to the storyline. Multiple comments from one person under a story are also discouraged. Capitalized sentences or comments will be removed (Internet shouting).
The Remnant comments sections are not designed for frequent personal blogging, on-going debates or theological or other disputes between commenters. Please understand that we pay our writers to defend The Remnant’s editorial positions. We thus acknowledge no moral obligation whatsoever to allow anyone and everyone to try to undermine our editorial policy and create a general nuisance on our website.  Therefore, Remnant moderators reserve the right to edit or remove comments, and comments do not necessarily represent the views of The Remnant.
back to top
Last modified on Thursday, September 2, 2021
Tweet
More in this category: « DOWN UNDER ARREST: Australian Jailed Over Vaccine Mandates Friend of The Remnant, Alex Šepkus, RIP »