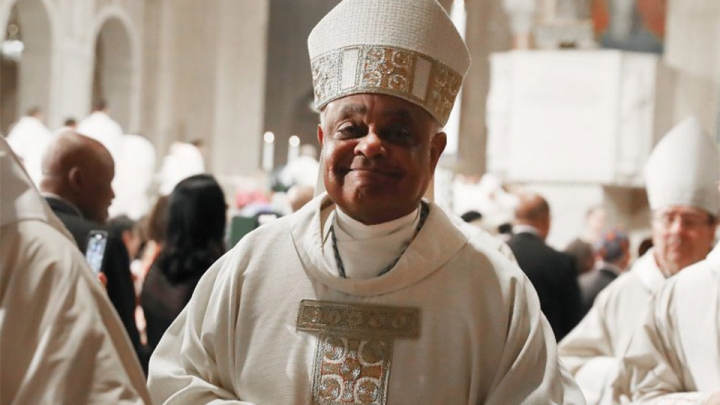 The Paulus Institute for the Propagation of Sacred Liturgy respectfully submits that our obligation and duty, as Catholics faithful to the Magisterium, compels us to insist that, in the interests of the unity of the universal Church, the Pontifical Solemn Mass on the Vigil of the Assumption of the Blessed Virgin Mary scheduled to be offered at the Basilica of the National Shrine of the Immaculate Conception on August 14, 2021, be reinstated on the Shrine calendar for that date, without delay.  His Excellency Archbishop Thomas Gullickson has reviewed this letter and has agreed.

Time is of the essence.  Respectfully, a most expeditious response is required by the end of Monday, August 2, given the time required for arranging the most fitting worship of Our Lord.

1.           None of the allegations of disunity and division presented in Traditionis Custodes and in the accompanying letter to bishops can rightfully be said to apply to this pontifical Mass, as demonstrated by prior pontifical celebrations arranged by The Paulus Institute in 2010 and in 2018 at the Shrine.  These were attended by participation of thousands of pilgrims, scores of priests, seminarians, orders of knights, and an Eastern Bishop in choro  in 2018, etc., and no disunity was created by His Eminence William Cardinal Baum, formerly Cardinal Archbishop of Washington, who in 2010 joined the pontifical Mass in choro (see his attached letter).

a.  Further regarding the laity, accusations directed at them without disclosed evidence are rebutted by motivations of the young expressed in this article published by Claire Chretien, entitled: "US Bishops ask young Catholics why they stayed in Church. They respond it's the Latin Mass." https://www.lifesitenews.com/blogs/us-bishops-ask-young-catholics-why-they-stayed-in-the-church-their-answer-the-latin-mass

2.          None of the cautions presented in Traditionis Custodes and the accompanying letter to bishops concerning “groups” (in dioceses) apply to the instant Mass of August 14, 2021.

a.  The National Shrine is neither a “parochial” church, as referenced in Traditionis Custodes, nor a diocesan church of the Archdiocese of Washington.

b. The Shrine is “the Patronal Church of United States Catholics.”  It is known as “America’s Catholic Church,” according to the Shrine’s own materials.  It is a National Shrine.  It has no pastor.  It has no designated territoriality.  It has no congregation.  It does not even have its own

c.  The Shrine was conceived in 1913 by Bishop Thomas Shahan, Rector of The Catholic University of America.  It was built on land donated by the Catholic University of America in Washington, DC, and paid for by donations from Catholics all across the United States.   The National Shrine is dedicated to Our Lady of the Immaculate Conception, who is the Patroness of our nation at the petition of the U.S. bishops in 1847.  Hundreds of thousands of visitors from around the United States and beyond visit the Shrine annually.

d.  The Shrine is also “the bishops’ church.”  Any bishop in the United States may say Mass at the Shrine as its calendar permits, which the Rector is obligated to respect.

3.           The Paulus Institute has an impeccable history that cannot be disparaged by false accusations regarding the Mass of the New Order Missal and the Second Vatican Council.

a.  The  Mission of The Paulus Institute concerns only the propagation of Sacred Liturgy—specifically the Usus Antiquior— the classical Roman Rite of the Mass and the Sacraments.  It has not addressed the new Mass or the Council.

b.  Copies of commendations are attached, demonstrating the credibility of The Paulus Institute.

c.  For the pontifical Masses of 2010, 2018, and now in 2021, The Paulus Institute has worked closely in all matters with Fr. Michael Weston of the Shrine and Fr. Mark Knestout of the Archdiocese of Washington.

d.  The Institute’s credibility was originally substantiated by a private audience in 2008 in Rome with His Eminence Dario Cardinal Castrillion Hoyos, then President of the Ecclesia Dei Commission, at which His Eminence agreed to celebrate a pontifical Mass arranged by The Paulus Institute, which eventuated in the Shrine pontifical Mass of April 2010.

4.           As further evidence of trustworthiness and credibility—of both The Paulus Institute and the lay and clerical faithful—in 2013 The Paulus Institute initiated an annual Nellie Gray Mass for the repose of the soul of Nellie Gray, Mother of the annual March for Life in Washington. This Mass has been said each January to hundreds of the faithful, most  under 40 years old, at a packed-to-overflowing St. Mary Mother of God Church.  On two occasions pontifical Masses were celebrated, by Rt. Rev. Philip Anderson, O.S.B., Abbott of Our Lady of Clear Creek Abbey (Clear Creek, Oklahoma), and by His Excellency Thomas Paprocki  (Diocese of Springfield).

a.  In Sacrosanctum Concilium, 4, the Fathers of the Second Vatican Council expressly required,  “In faithful obedience to Tradition, the sacred Council declares that holy mother Church holds all lawfully acknowledged rites to be of equal right and dignity; that she wishes to preserve them in the future and to foster them in every way."

b.  Unambiguously, offering the Holy Sacrifice of the Mass in the Roman Rite, the Usus Antiquior, is a millennial treasure of the sacred Deposit of the Faith—and as such is a right enjoyed by entitlement by the Catholic faithful, including all those hundreds of thousands who will join this Mass by EWTN broadcast.  The traditional Mass must therefore be directed to all the Catholic

Faithful, and fostered in every way, which is incumbent on the episcopate to respect and propagate.

c.  Therefore, if there are any objections to faithful Catholics who attend this Roman Rite liturgy, the objections cannot be addressed by suppressing the liturgy itself, either de jure or de facto.

6.           The Catholic faithful desire to come to this Mass, now more than ever, a consequence of the COVID plague, just as thousands have come to the each of the pontifical Shrine Masses of 2010 and 2018 arranged by The Paulus Institute.  Those Catholic faithful hold fast their right to expect that the expression of the Mass according to the Usus Antiquior be protected and upheld by the episcopate.

The cancellation of the Mass, so long planned and prepared, is a violation of fundamental justice, because it is an arbitrary action not motivated by any urgency.  The Catholic faithful should not be subjected to penalties for unused travel reservations caused by an unworthy cancellation of the Mass.  These are pilgrims anticipated by the Shrine by its very nature.  They are inspired by a Marian Mass at the Shrine, their National Church.  They often incur substantial sacrifices to come from distances to the Shrine, from all corners of the United States and not uncommonly elsewhere beyond our boundaries.  In justice and charity, they should be comforted with the Mass they expect.

The Basilica of the National Shrine of the Immaculate Conception is the church of all American Catholics, and the Church of the bishops.  Those Catholics whose parents and grandparents built this majestic edifice have inherited a right to this most glorious liturgical enactment.  As they see in it a reflection of the mysteries and Catholic beliefs, they must be given the essence of our Catholic faith and the fullest expression of the lex orandi-lex credendi of our Catholic patrimony.

In the unity of our Universal Church, in Christ Jesus and the Motherhood of Mary Assumed into Heaven,

and asking the blessing of Your Eminence,

Reply to This email address is being protected from spambots. You need JavaScript enabled to view it.

[Comment Guidelines - Click to view]
The Remnant values the comments and input of our visitors. It’s no secret, however, that trolls exist, and trolls can do a lot of damage to a brand. Therefore, our comments are heavily monitored 24/7 by Remnant moderators around the country.  They have been instructed to remove demeaning, hostile, needlessly combative, racist, Christophobic comments, and streams not related to the storyline. Multiple comments from one person under a story are also discouraged. Capitalized sentences or comments will be removed (Internet shouting).
The Remnant comments sections are not designed for frequent personal blogging, on-going debates or theological or other disputes between commenters. Please understand that we pay our writers to defend The Remnant’s editorial positions. We thus acknowledge no moral obligation whatsoever to allow anyone and everyone to try to undermine our editorial policy and create a general nuisance on our website.  Therefore, Remnant moderators reserve the right to edit or remove comments, and comments do not necessarily represent the views of The Remnant.
Last modified on Saturday, July 31, 2021