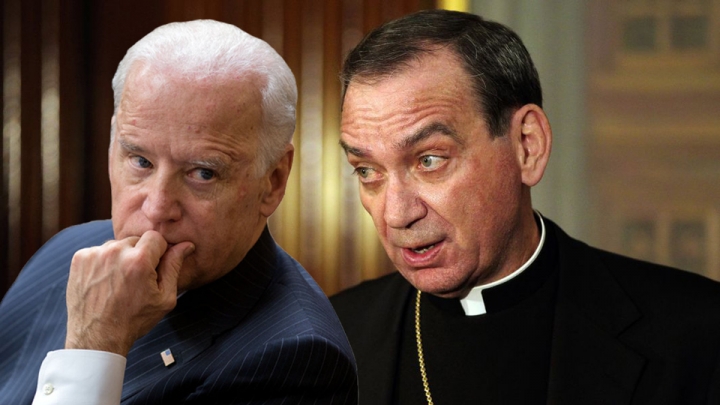 GatewayPundit | Cristina Laila: The Archdiocese of Cincinnati, Ohio said its archbishop would never have granted permission for Joe Biden to hold an event at Mount St. Joseph University had he been contacted ahead of the visit.

In a Tuesday statement, Archbishop Dennis M. Schnurr said he was not contacted by any involved party about Biden’s upcoming visit.

Biden will be speaking and answering questions at a CNN town hall at the Catholic university this week.

Archbishop Dennis M. Schnurr has not been contacted by any involved party about the upcoming visit of President Joseph R. Biden to Cincinnati to participate in a CNN town hall meeting at Mount St. Joseph University. Archbishop Schnurr has therefore not been asked for, nor would he have granted, his approval for any such event to occur on Catholic premises. Mount St. Joseph University operates under the sponsorship of the Sisters of Charity and not under the direct oversight of the Archdiocese of Cincinnati.

“Devout Catholic” Joe Biden has been denied Holy Communion in the past for his support of abortion.

“Sadly, this past Sunday, I had to refuse Holy Communion to former Vice President Joe Biden,” Father Robert E. More said in 2019. “Holy Communion signifies we are one with God, each other and the Church. Our actions should reflect that. Any public figure who advocates for abortion places himself or herself outside of Church teaching.”

U.S. Catholic bishops approved the drafting of a “teaching document” that will prevent Joe Biden and other pro-abortion politicians from receiving Communion for their support for the practice.

The vote was overwhelmingly in favor of the move, with 168 in favor and 55 against. It was announced on Friday at the end of the three-day meeting of the U.S. Conference of Catholic Bishops, following their vote on Thursday.

[Comment Guidelines - Click to view]
The Remnant values the comments and input of our visitors. It’s no secret, however, that trolls exist, and trolls can do a lot of damage to a brand. Therefore, our comments are heavily monitored 24/7 by Remnant moderators around the country.  They have been instructed to remove demeaning, hostile, needlessly combative, racist, Christophobic comments, and streams not related to the storyline. Multiple comments from one person under a story are also discouraged. Capitalized sentences or comments will be removed (Internet shouting).
The Remnant comments sections are not designed for frequent personal blogging, on-going debates or theological or other disputes between commenters. Please understand that we pay our writers to defend The Remnant’s editorial positions. We thus acknowledge no moral obligation whatsoever to allow anyone and everyone to try to undermine our editorial policy and create a general nuisance on our website.  Therefore, Remnant moderators reserve the right to edit or remove comments, and comments do not necessarily represent the views of The Remnant.
back to top
Last modified on Thursday, July 22, 2021
Tweet
More in this category: « An Orwellian Hijacking Is America Magazine More Catholic Than the Pope? »