Vatican Walks Back Ban on Private Masses in St. Peter's? 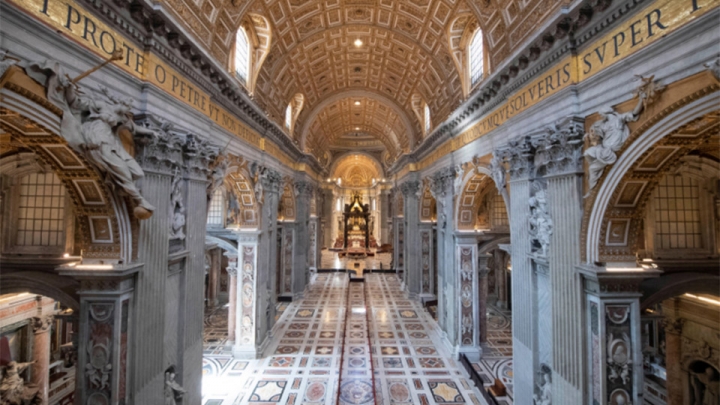 Editor's Note: Having read over this Vatican "clarification" several times now, I remain at something of a loss as to what exactly Mons. Gambetti is trying to say, other than that Our Lord should have probably concelebrated the Last Supper with all the Apostles. I would be interested to know what readers think is actually going on here, and would encourage suggestions in the comment box below. Might be fun. Good luck. MJM

Having received from the Holy Father the mandate to take care of and animate the liturgical life of St Peter’s Basilica, I would like to propose some considerations based on the statement of the Secretariat of State of 12 March 2021, which I hope will be useful in understanding the guidelines outlined and in choosing how and when to celebrate the Eucharist in the early morning hours.

The statement of the Secretariat of State has given several dispositions regarding the celebration of Holy Masses in St Peter’s Basilica, with the intention of ensuring that they “take place in an atmosphere of recollection and liturgical decorum.” The indications refer to a precise context, namely the organization of liturgical actions in the time slot between 7 and 9 am.

They are essentially inspired by two principles:

a. to order the celebrations from the point of view of their time frame and quality;

b. to welcome and integrate particular and legitimate wishes of the faithful, as far as possible.

In fact, the content of the proposals set out by the Secretariat of State can be summarized as follows:

a. between 7 a.m. and 9 a.m. priests may concelebrate at one of the hourly Masses in the designated places; liturgical animation shall include the assistance of altar boys [ministranti];

b. exceptions are allowed with regard to the places of celebration — on the occasion of the memorial of a saint whose remains are housed in the Basilica — and the simultaneous holding of certain celebrations for groups of pilgrims or in the Extraordinary Form of the Roman Rite.

For ease of reading, I shall articulate these notes according to the two above-mentioned points.

A. Concelebrations from 7am to 9am

The manner of ordering the morning celebrations envisaged in the statement of the Secretariat of State provides an opportunity to recall the meaning and value of Eucharistic concelebration which, as the Fathers of the last Council recalled, is part of the Church’s Tradition: “Concelebration, whereby the unity of the priesthood is appropriately manifested, has remained in use to this day in the Church both in the east and in the west.” (Sacrosanctum Concilium, 57). For this reason, the Second Vatican Council, in its Constitution on the Sacred Liturgy, extended the faculty for priests to concelebrate and subsequent magisterial documents have specified the norms.[1] In this sense, it may be useful to recall some cases in which the Magisterium recommends concelebration, such as at the main Mass in a church or at Masses on the occasion of meetings of priests, secular or religious, whatever their character (cf. SC 57; General Instruction of the Roman Missal 199).

On the other hand, the very nature of celebration is clearly defined in Sacrosanctum Concilium, where it deals with the Norms drawn from the hierarchic and communal nature of the Liturgy: “Liturgical services are not private functions, but are celebrations of the Church, which is the ‘sacrament of unity,’ namely, the holy people united and ordered under their bishops. Therefore, liturgical services pertain to the whole body of the Church; they manifest it and have effects upon it […]. [W]henever rites, according to their specific nature, make provision for communal celebration involving the presence and active participation of the faithful, this way of celebrating them is to be preferred, so far as possible, to a celebration that is individual and quasi-private. This applies with especial force to the celebration of Mass and the administration of the sacraments, even though every Mass has of itself a public and social nature” (SC 26-27).

Therefore, the assembly gathered for the Eucharist fully manifests the mystery of the Church, the living Body of Christ. This is recalled by Lumen gentium[2] when it treats of the common priesthood exercised in the sacraments, and it is also clearly recalled by the Catechism of the Catholic Church, which affirms that it is the whole community, the Body of Christ united to its Head, that celebrates (n. 1140). In this perspective, one understands how the greatest fruit of the Eucharist is drawn from participation in the same action, because it better expresses the mystery that is celebrated.[3]

Clearly, all those who make up the assembly gathered for the Eucharist participate in the one sacrifice and priesthood of Christ, each according to his own state and condition of life: Bishop, priest, deacon, baptized, married, religious. In a Mass concelebrated by several priests there is no diminution of the value and fruits of the Eucharistic sacrifice, but rather a full exaltation of them.

A first element for discernment, in our context, is therefore this: whenever possible, it is more than fitting for priests to concelebrate, given also the fact that there is a regular alternation of presiding over the concelebrations that ordinarily takes place in St Peter’s Basilica. The same is also true for individual members of the faithful and groups, who are invited to take part in the same Mass so that it may be an expression of fraternity and not of particularism which does not reflect the sense of the Church.[4]

The Magisterium teaches that exceptions may be made to situations in which concelebration is recommended, when the benefit of the faithful does not require or advise otherwise.[5]

In this sense, the importance of understanding language in the liturgy in relation to charity (cf. 1 Cor 14), and the pastoral value which the celebration of the Eucharist can have, should not be underestimated for a group of pilgrims, in accordance with the existing Rites of the Catholic Church.

In addition to these considerations, there are a number of elements of the reality which characterizes the Basilica which must be taken into due account:

-  the size of St Peter’s Basilica and its architecture make it possible to meet the different needs of those who wish to celebrate the Eucharist in groups without overlapping with the concelebration taking place in the main liturgical sites;

-  St Peter’s Basilica is characterized by the Petrine ministry of unity, mercy and orthodoxy of faith and welcomes pilgrims from all over the world;

-  for celebrations with the 1962 Missale Romanum, everything possible must be done to fulfil the wishes of the faithful and priests as stipulated in Motu Proprio Summorum Pontificum. Furthermore, without detracting in any way from the legitimacy of the celebration of Mass by individual priests also when the faithful cannot participate,[6] it is necessary to recognize the decisive character of the rule that prohibits celebrating “individually […] while a concelebration is taking place in the same church or oratory” (Code of Canon Law, can. 902).[7]

For this reason, I have already given instructions to ensure that requests to celebrate during the 7-9 a.m. period by groups with special and legitimate needs will be granted as far as possible. Requests for individual celebrations can also be discerned on a case-by-case basis, without prejudice to the principle that everything should take place in an atmosphere of recollection and decorum, and taking care to ensure that what is exceptional does not become ordinary, distorting the intentions and meaning of the Magisterium.

Thus, I am confident that the path we have embarked upon will enable every priest and every member of the faithful to experience celebrations in Saint Peter’s in a way that is ever more ordered to goodness, beauty and truth.

Mauro Cardinal Gambetti
Archpriest of the Basilica of Saint Peter

[1] Cf. for example: General Instruction of the Roman Missal; Statement on Concelebration by the Sacred Congregation for Divine Worship, 7 August 1972; CIC 902.

[2] “[The faithful], taking part in the Eucharistic sacrifice, which is the fount and apex of the whole Christian life, they offer the Divine Victim to God, and offer themselves along with It. Thus both by reason of the offering and through Holy Communion all take part in this liturgical service, not indeed, all in the same way but each in that way which is proper to himself. Strengthened in Holy Communion by the Body of Christ, they then manifest in a concrete way that unity of the people of God which is suitably signified and wondrously brought about by this most august sacrament.” Lumen gentium, 11.

[3] In his contribution Sacrifice, sacrament and priesthood in the development of the Church (in Annunciatori della Parola e servitori della vostra gioia, LEV, 2013), Joseph Ratzinger expresses it as follows: “The true place of the Church’s existence is not some bureaucracy, nor in the activity of a group that claims to be the ‘foundation’ [base], but in the ‘assembly’. This is Church in action [...]. More precisely: the content of the assembly is the reception of the word of God, which culminates in the memorial of Jesus’ death, in a memorial that realizes his presence and signifies mission. It follows from this that every assembly is entirely Church, since the body of the Lord cannot but be all, and the word of God in turn cannot but be all. At the same time, however, it follows that the individual assembly, the individual community, remains Church only if it is in the whole, in unity with the others” (p. 82).

[4] Regarding the goodness of concelebrating the Eucharist, what is indicated for Shrines in n. 268 of the Directory on Popular Piety and Liturgy, Principles and Guidelines, Vatican City 2002, is illuminating.

[6] When there is no possibility for the faithful to participate, the daily celebration of Mass is still recommended for priests. The Council teaches this in the decree Presbyterorum ordinis: “In the mystery of the Eucharistic Sacrifice, in which priests fulfill their greatest task, the work of our redemption is being constantly carried on;(14) and hence the daily celebration of Mass is strongly urged, since even if there cannot be present a number of the faithful, it is still an act of Christ and of the Church” (n. 13).

[Comment Guidelines - Click to view]
The Remnant values the comments and input of our visitors. It’s no secret, however, that trolls exist, and trolls can do a lot of damage to a brand. Therefore, our comments are heavily monitored 24/7 by Remnant moderators around the country.  They have been instructed to remove demeaning, hostile, needlessly combative, racist, Christophobic comments, and streams not related to the storyline. Multiple comments from one person under a story are also discouraged. Capitalized sentences or comments will be removed (Internet shouting).
The Remnant comments sections are not designed for frequent personal blogging, on-going debates or theological or other disputes between commenters. Please understand that we pay our writers to defend The Remnant’s editorial positions. We thus acknowledge no moral obligation whatsoever to allow anyone and everyone to try to undermine our editorial policy and create a general nuisance on our website.  Therefore, Remnant moderators reserve the right to edit or remove comments, and comments do not necessarily represent the views of The Remnant.
back to top
Last modified on Wednesday, June 23, 2021
Tweet
More in this category: « A SIGN of the TIMES: Novus Ordo Returns to Mass Rocks of Persecuted Ireland THE TRUMP TWEETS: Donald Trump on the Southern Border Crisis »