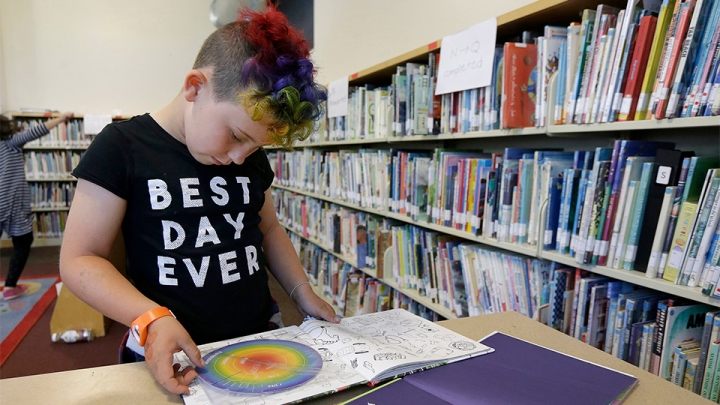 The brief video of Byron Cross speaking against a proposed transgender elementary school policy last month at a Loudoun County, Virginia school board public hearing was a shot over the leftist bow.

The proposed policy: “Staff shall allow gender-expansive or transgender students to use their chosen name and gender pronouns that reflect their gender identity without any substantiating evidence, regardless of the name and gender recorded in the student’s permanent educational record.”

Cross, a physical education teacher in the Loudoun school district stated: “It is not my intention to hurt anyone, but there are certain truths we must face when ready,” he continued. “I love all of my students, but I will never lie to them regardless of the consequences. I’m a teacher, but I serve God first, and I will not affirm that a biological boy can be a girl and vice versa because it’s against my religion, it’s lying to a child, it’s abuse to a child, and it’s sinning against our God.”

75 to 90% of children struggling with gender dysphoria return to their natural gender by puberty.

Natural law and biology are on Cross’s side.  Various white paper studies say 75 to 90% of children struggling with gender dysphoria return to their natural gender by puberty.  Moreover, it is the adults who support their dysphoria that are another hurdle for the child to revert back to their true gender.

What the left fails to understand is that resistance to the transgender movement is not about hate or phobia, it is about getting help for those in need.  Much of this undertaking is indoctrination rather than dysphoria.  America is a center-right nation, not the leftist daydreams of AOC and the squad.

Common sense, where art thou?

For speaking out as a private citizen, the school district suspended Cross. It was their way of demonstrating to other teachers what will happen provided they dare question future board proposals.  This is what now happens in the land of the free and the home of the brave when one courageously possesses the honesty and humility to cross the woke cancel culture.

What the left fails to understand is that resistance to the transgender movement is not about hate or phobia, it is about getting help for those in need.

Fear and intimidation are useful tools to silence those who disagree.  Make no mistake our very freedoms lie in the balance.  Such tyrannical behavior by publicly elected officials should result in their immediate recall.  Anyone involved in Cross’s suspension has no place in office as they do not respect or value the 1st Amendment.

Leftist ideology cannot exist in truth because it is a lie. Throughout history, it has led to ample agony, anguish and death.  Once upon a time in America, the national media worked to expose the left’s lies.

Today, they are willing participants.

A Virginia court rightfully reinstated Cross, who spoke as a private citizen, making his suspension unconstitutional. The Alliance Defending Freedom, who represented Cross, saluted the decision: “Educators are just like everybody else – they have ideas and opinions that they should be free to express.”

Despite the outcome, the obvious threat to those who resist remains clear.

Bravery circa 1944: young men charging from the choppy seas of the English Channel onto the corpse-strewn beaches of Normandy, hellfire raining down upon them, to liberate a continent.  Bravery circa 2021: young men identifying as women, and vice versa.”  -Ben Shapiro

President Biden omitted recalling the incredible bravery exhibited on the anniversary of D-Day this past June 6th, but he didn’t forget transgenders saying: “To transgender Americans across the country — especially the young people who are so brave — I want you to know your President has your back.”

The Daily Wire’s Ben Shapiro juxtaposed the stark difference saying: “Bravery circa 1944: young men charging from the choppy seas of the English Channel onto the corpse-strewn beaches of Normandy, hellfire raining down upon them, to liberate a continent.  Bravery circa 2021: young men identifying as women, and vice versa.”

It was encouraging to see a God-fearing man like Cross stand up for truth and common decency, while entrenched in the belly of the beast.  Cross refuses to surrender public education to the left. Hope is alive and can be found among fearless Christian conservatives who speak up and take a stand.

One stands up and then the next and it builds.

But just how far remains to be seen.

Irish philosopher Edmund Burke said nobody made a greater mistake than doing nothing because they could do only a little.  If we all do what we can, we can restore our nation where mutual courtesy, shared decency, and common sense become common once again.

[Comment Guidelines - Click to view]
The Remnant values the comments and input of our visitors. It’s no secret, however, that trolls exist, and trolls can do a lot of damage to a brand. Therefore, our comments are heavily monitored 24/7 by Remnant moderators around the country.  They have been instructed to remove demeaning, hostile, needlessly combative, racist, Christophobic comments, and streams not related to the storyline. Multiple comments from one person under a story are also discouraged. Capitalized sentences or comments will be removed (Internet shouting).
The Remnant comments sections are not designed for frequent personal blogging, on-going debates or theological or other disputes between commenters. Please understand that we pay our writers to defend The Remnant’s editorial positions. We thus acknowledge no moral obligation whatsoever to allow anyone and everyone to try to undermine our editorial policy and create a general nuisance on our website.  Therefore, Remnant moderators reserve the right to edit or remove comments, and comments do not necessarily represent the views of The Remnant.
back to top
Last modified on Friday, June 18, 2021
Tweet