The Tale of Two Governors: DeSantis and Ducey 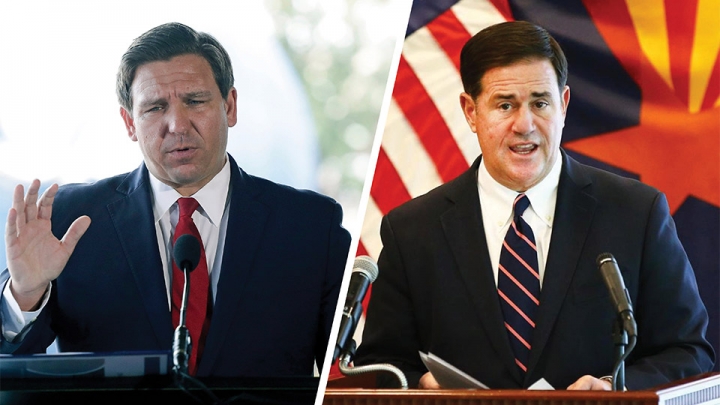 Governor Ron DeSantis has been keeping his state safe from COVID…induced economic shutdown, lockdown, masking, and school closures, and now he’s tackling another side of “woke”: He isn’t allowing transgender males to compete in girls sports.

“You can’t be cowed by these organizations, or particularly by woke corporations from doing the right thing. And so my view was throughout this whole time, we have to protect our girls, it is discriminatory to force them to compete against biological males,” DeSantis continued. “And so if the price of having a tournament is that I have to deny equal opportunity to hundreds of thousands of young girl and women athletes throughout Florida, I am much more willing to stand with the girls. And to hell with these events.”

Those lucky Floridians! How does it feel to have a governor who follows ACTUAL science and moral law?

Incredible to see that RINO Governor Doug Ducey of Arizona just vetoed a bill that would have outlawed Critical Race Theory training for State employees, and another that would have banned the mailing of ballots to citizens who never requested them. He did this under the guise of passing a budget. For those of you who think Doug Ducey is good for Arizona, you are wrong. Our Country needs Attorney General Mark Brnovich, who has done little so far on Voter Integrity and the 2020 Presidential Election Scam, to step it up—but patriotic Republicans in the State Senate are making up for unelectable RINOs.