ANOTHER GREAT FACADE: The Vatican’s New Provisions on Transparency 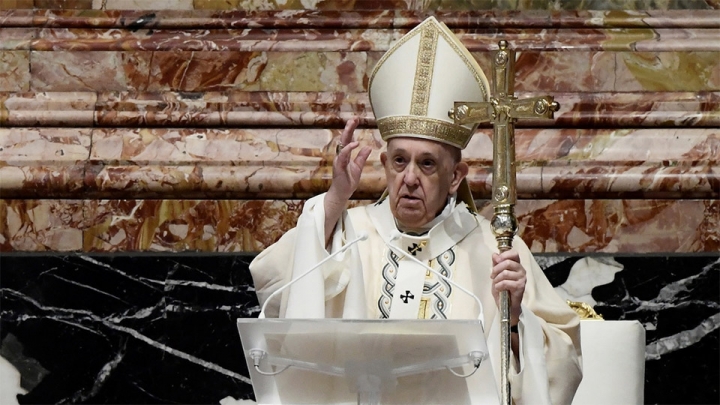 Vatican executives, including Cardinals who are heads of dicasteries and administrators, will be required to sign a declaration stating that they have no convictions or investigations against them for terrorism, money laundering or tax evasion.

Furthermore, they may not hold assets in tax havens or invest in companies that operate contrary to the doctrine of the Church. These stipulations are laid down in the Pope's newly-issued Motu Proprio, which contains provisions on transparency in the management of public finances. The declaration must be signed upon taking up any office or position and must be repeated every two years. It is also forbidden for all Vatican employees to accept gifts worth more than forty euros. The full text of the document may be found here.

The operation deals a devastating blow to the credibility of the Roman Curia, the Vatican City State and the Holy See.

But allow us a brief comment. The new Motu Proprio is incredible. One of two things must be true if the pope is forced to make cardinals and other top managers sign such a declaration: either it means that he has no confidence in the personnel he himself has selected, or else it means that the state of corruption, malpractice and immorality in the Sacred Palaces is endemic.

In either case, the Vatican ruling class comes off badly. Or – and this is a third possibility – the pope has decided the measure pro domo sua, to show the world how great he is at fighting dishonesty. But even in this case, the operation deals a devastating blow to the credibility of the Roman Curia, the Vatican City State and the Holy See. But such credibility does not seem to be close to the heart of the current tenant of Santa Marta.

The architects of the Vatican's financial collapse not only remain in place, but in addition they are now flanked by largely compromised individuals who are therefore extremely blackmailable and may be easily manipulated.

While an outside observer may perhaps believe the media image of an upright Bergoglio committed to the fight against corruption who has been a victim of his corrupt collaborators, those who know the dynamics within the Vatican know that today's proclamations represent yet another effort to falsify reality, in which the information that is divulged is actually the exact opposite of what is really going on.

Those who, like Archbishop Carlo Maria Viganò, tried to fight corruption and worked effectively to clean up the budget of the Vatican City State (or Governorate), were "promoted" (promoveatur ut amoveatur – “promote him to get rid of him”), and their team of trusted collaborators was dispersed, because they were a threat to the system. The most valuable of them, Eugenio Hasler, was treated in an unspeakable manner by the “Pope of Mercy”. Summoned to appear before him, he was dismissed on the spot without giving any reason, consigned to the ridicule of the media, and destroyed in his dignity.

It should also be remembered that the meritorious work of Cardinal Pell and other excellent administrators of the patrimony of the Apostolic See was blocked by groundless accusations and a true persecution in which the Australian cardinal suffered the unjust sentence of imprisonment, from which he was later completely acquitted. On the other hand, the architects of the Vatican's financial collapse not only remain in place, but in addition they are now flanked by largely compromised individuals who are therefore extremely blackmailable and may be easily manipulated.

Once again, Bergoglio seems determined to discredit the image and prestige of the Church.

The Vatican scandals that have been emerging in recent months, including shareholdings in pharmaceutical companies that produce abortion drugs, cannot be covered up by window-dressing. Nor can the removal of Cardinal Becciu after his denunciation for property speculation in London mitigate the extremely grave culpability of those who believe they can charm public opinion with a bombastic Motu Proprio. The ones who have issued the Motu Proprio  are the very ones who themselves created the conditions for corruption and conflict of interests, by removing the individuals who could have definitively healed a chronic situation of malpractice instead.

Once again, Bergoglio seems determined to discredit the image and prestige of the Church in order to put himself forward as a moralizer and gain personal advantage. But history teaches us that the cult of personality, so typical of dictatorships, easily turns into damnatio memoriae.

[Comment Guidelines - Click to view]
The Remnant values the comments and input of our visitors. It’s no secret, however, that trolls exist, and trolls can do a lot of damage to a brand. Therefore, our comments are heavily monitored 24/7 by Remnant moderators around the country.  They have been instructed to remove demeaning, hostile, needlessly combative, racist, Christophobic comments, and streams not related to the storyline. Multiple comments from one person under a story are also discouraged. Capitalized sentences or comments will be removed (Internet shouting).
The Remnant comments sections are not designed for frequent personal blogging, on-going debates or theological or other disputes between commenters. Please understand that we pay our writers to defend The Remnant’s editorial positions. We thus acknowledge no moral obligation whatsoever to allow anyone and everyone to try to undermine our editorial policy and create a general nuisance on our website.  Therefore, Remnant moderators reserve the right to edit or remove comments, and comments do not necessarily represent the views of The Remnant.
back to top
Last modified on Friday, April 30, 2021
Tweet
More in this category: « TRUMP TWEETS: Donald Trump on the Oscars THE TRUMP TWEETS: Donald Trump on Twitter's Plummeting Popularity »