Proclamation on 850th Anniversary of the Martyrdom of Saint Thomas Becket 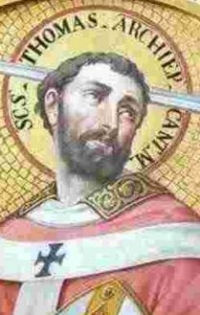 Today is the 850th anniversary of the martyrdom of Saint Thomas Becket on December 29, 1170. Thomas Becket was a statesman, a scholar, a chancellor, a priest, an archbishop, and a lion of religious liberty.

Before the Magna Carta was drafted, before the right to free exercise of religion was enshrined as America’s first freedom in our glorious Constitution, Thomas gave his life so that, as he said, “the Church will attain liberty and peace.”

The son of a London sheriff and once described as “a low‑born clerk” by the King who had him killed, Thomas Becket rose to become the leader of the church in England. When the crown attempted to encroach upon the affairs of the house of God through the Constitutions of Clarendon, Thomas refused to sign the offending document. When the furious King Henry II threatened to hold him in contempt of royal authority and questioned why this “poor and humble” priest would dare defy him, Archbishop Becket responded “God is the supreme ruler, above Kings” and “we ought to obey God rather than men.”

Because Thomas would not assent to rendering the church subservient to the state, he was forced to forfeit all his property and flee his own country. Years later, after the intervention of the Pope, Becket was allowed to return — and continued to resist the King’s oppressive interferences into the life of the church. Finally, the King had enough of Thomas Becket’s stalwart defense of religious faith and reportedly exclaimed in consternation: “Will no one rid me of this meddlesome priest?”

The King’s knights responded and rode to Canterbury Cathedral to deliver Thomas Becket an ultimatum: give in to the King’s demands or die. Thomas’s reply echoes around the world and across the ages. His last words on this earth were these: “For the name of Jesus and the protection of the Church, I am ready to embrace death.” Dressed in holy robes, Thomas was cut down where he stood inside the walls of his own church. 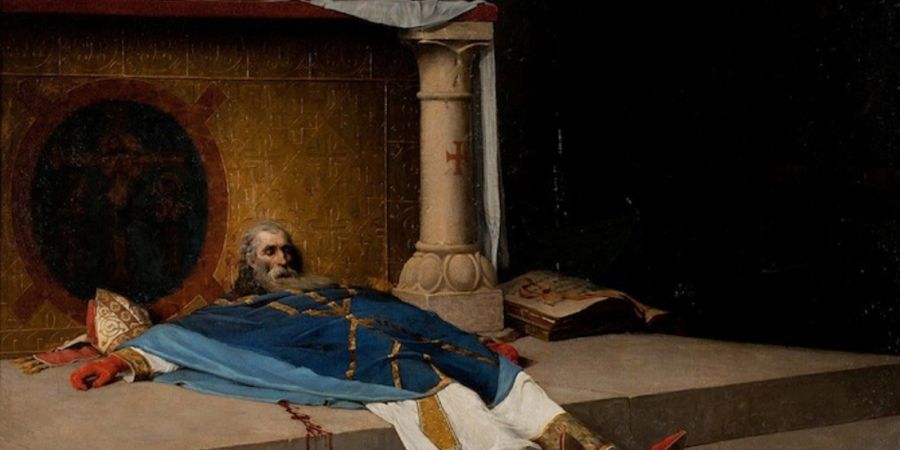 Thomas Becket’s martyrdom changed the course of history. It eventually brought about numerous constitutional limitations on the power of the state over the Church across the West. In England, Becket’s murder led to the Magna Carta’s declaration 45 years later that: “[T]he English church shall be free, and shall have its rights undiminished and its liberties unimpaired.”

When the Archbishop refused to allow the King to interfere in the affairs of the Church, Thomas Becket stood at the intersection of church and state. That stand, after centuries of state-sponsored religious oppression and religious wars throughout Europe, eventually led to the establishment of religious liberty in the New World. It is because of great men like Thomas Becket that the first American President George Washington could proclaim more than 600 years later that, in the United States, “All possess alike liberty of conscience and immunities of citizenship” and that “it is now no more that toleration is spoken of, as if it was by the indulgence of one class of people, that another enjoyed the exercise of their inherent natural rights.”

Thomas Becket’s death serves as a powerful and timeless reminder to every American that our freedom from religious persecution is not a mere luxury or accident of history, but rather an essential element of our liberty. It is our priceless treasure and inheritance. And it was bought with the blood of martyrs.

As Americans, we were first united by our belief that “rebellion to tyrants is obedience to God” and that defending liberty is more important than life itself. If we are to continue to be the land of the free, no government official, no governor, no bureaucrat, no judge, and no legislator must be allowed to decree what is orthodox in matters of religion or to require religious believers to violate their consciences. No right is more fundamental to a peaceful, prosperous, and virtuous society than the right to follow one’s religious convictions. As I declared in Krasiński Square in Warsaw, Poland on July 6, 2017, the people of America and the people of the world still cry out: “We want God.”

On this day, we celebrate and revere Thomas Becket’s courageous stand for religious liberty and we reaffirm our call to end religious persecution worldwide. In my historic address to the United Nations last year, I made clear that America stands with believers in every country who ask only for the freedom to live according to the faith that is within their own hearts. I also stated that global bureaucrats have absolutely no business attacking the sovereignty of nations that wish to protect innocent life, reflecting the belief held by the United States and many other countries that every child — born and unborn — is a sacred gift from God. Earlier this year, I signed an Executive Order to prioritize religious freedom as a core dimension of United States foreign policy. We have directed every Ambassador — and the over 13,000 United States Foreign Service officers and specialists — in more than 195 countries to promote, defend, and support religious freedom as a central pillar of American diplomacy.

We pray for religious believers everywhere who suffer persecution for their faith. We especially pray for their brave and inspiring shepherds — like Cardinal Joseph Zen of Hong Kong and Pastor Wang Yi of Chengdu — who are tireless witnesses to hope.

To honor Thomas Becket’s memory, the crimes against people of faith must stop, prisoners of conscience must be released, laws restricting freedom of religion and belief must be repealed, and the vulnerable, the defenseless, and the oppressed must be protected. The tyranny and murder that shocked the conscience of the Middle Ages must never be allowed to happen again. As long as America stands, we will always defend religious liberty.

A society without religion cannot prosper. A nation without faith cannot endure — because justice, goodness, and peace cannot prevail without the grace of God.

IN WITNESS WHEREOF, I have hereunto set my hand this twenty-eighth day of December, in the year of our Lord two thousand twenty, and of the Independence of the United States of America the two hundred and forty-fifth.

[Comment Guidelines - Click to view]
The Remnant values the comments and input of our visitors. It’s no secret, however, that trolls exist, and trolls can do a lot of damage to a brand. Therefore, our comments are heavily monitored 24/7 by Remnant moderators around the country.  They have been instructed to remove demeaning, hostile, needlessly combative, racist, Christophobic comments, and streams not related to the storyline. Multiple comments from one person under a story are also discouraged. Capitalized sentences or comments will be removed (Internet shouting).
The Remnant comments sections are not designed for frequent personal blogging, on-going debates or theological or other disputes between commenters. Please understand that we pay our writers to defend The Remnant’s editorial positions. We thus acknowledge no moral obligation whatsoever to allow anyone and everyone to try to undermine our editorial policy and create a general nuisance on our website.  Therefore, Remnant moderators reserve the right to edit or remove comments, and comments do not necessarily represent the views of The Remnant.
back to top
Last modified on Tuesday, December 29, 2020
Tweet

More in this category: « Bishop Fellay's Former Assistant Reaches Out to Victim of Alleged Clerical Sexual Abuse Father Normandin, Holy Priest Out in the Cold, RIP »