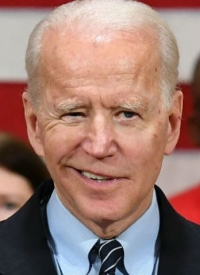 A journeyman is defined as someone who is reliable, not outstanding, but more of a placeholder than anything else.

In today’s politically charged universe, who does that remind you of?

There is no greater representative of the entrenched, bureaucratic, political class better known as the “D.C. Swamp” than Joe Biden and his nearly half-century membership highlights it.  Biden will serve his most crucial role as the placeholder for Kamala Harris, if the presidential election goes as predicted for Democrats. Provided you are unfamiliar with what the 25th Amendment of the Constitution entails, it won’t be long until you are.

Robert Gates, who served as defense secretary when Biden was vice president would later write that Biden “has been wrong on nearly every major foreign policy and national security issue over the past four decades.”

When asked what he plans to do about dementia, Biden pledged to increase their foreign aid and accept all their immigrants.

Biden presides over a Democrat party that coddles extremists and ignores riotous violence.  Biden’s campaign slogan of “Build Back Better” is more suited as “Build back Bitter.”

If Democrats did not have double standards, they would have no standards at all. Turn off the rhetoric and study what they actually do.  For instance, according to the Chronicle of Philanthropy, over the preceding decade the Biden’s gave an average of $369 per year to charities.  Biden is all about using your money, not his.

Biden’s mantra about saving the “soul of America,” is bizarre coming from a man who responds to political incentives quicker than Pontius Pilate.  Biden wears the Catholic badge as he does his mask when campaigning from his basement.  Biden should wear two masks – one for each face.

His “devout” Catholicism is derisive and a sham.

Biden is the most radically pro-abortion, pro-LGBTQ, “Catholic” candidate ever to headline a national ticket.  Biden embraces sodomy as “marriage” and has even presided over one.

Biden’s self-serving flip on the Hyde Amendment, which bans federal tax dollars from paying for abortions, speaks to his character that only distances himself from the truths of Catholicism, particularly that every life is sacred from conception to natural death.

He is certainly catholic with a small “c” when it comes to abortion, and his pro-abort running mate Kamala Harris, when she was California attorney general, played a key role in defending Planned Parenthood over its sale of aborted baby parts in violation of federal law.  A Biden administration would not only codify abortion into federal law but make the taxpayer foot the bill.  They would also force the Little Sisters of the Poor to fund abortion and contraception.

In Catholic circles, Biden is what you would call a “cafeteria Catholic” – someone who adheres to whatever Church dogma suits them.  Cafeteria Catholics are legion and heretics, too.

If Catholicism were a crime, would there be enough evidence to convict?

Testimony points to a Biden acquittal.

Ever since Judas betrayed Our Lord, you can trace all major crises to the silence of Christian clergy and by doing so they surrender their moral authority.  For Biden and any Catholic reading this, it was at the Council of Trent where St. Pope Pius V prophetically said, “All the evils of the world are due to lukewarm Catholics.”

Where are the Fulton Sheen archbishops of today?  If you need more convincing, run an internet search for the homilies of Father Altman and Meeks.

Economist and scholar, Thomas Sowell summed the 2020 election in these words: “If the election goes to Biden, there’s a good chance that the Democrats will then control the two branches of Congress and the White House, and considering the kinds of things that they’re proposing, that could well be the point of no return for this country.”

As we head into the election’s home stretch, one must never underestimate the percolating sensation of the “shy voter.”  Given all the political animosity that is anti-Trump, the “shy voter” is one who considers it taboo to declare openly that they would vote for Trump.  They could very well be the 2020 version of the Silent Majority.

Much can occur during the last weeks of any election year, let alone the most conspicuous presidential election in more than a century.

In 2016, Hillary Clinton was leading by nearly seven points at this juncture.

History can be a resounding echo.