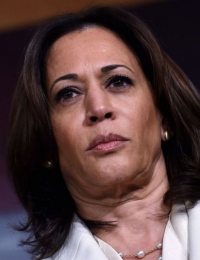 The Knights of Columbus were founded by Rev. Michael McGivney in 1882 during a protracted period of Catholic bigotry, to provide assistance to widows and orphans.  Since then, they have become the world’s largest Catholic fraternal and charitable organization with councils around the world and devoid of any political affiliation.

Rev. McGivney is presently a candidate for Catholic sainthood.

Within the last decade, its two million members have raised more than $1 billion and provided hundreds of millions of hours to charities that include the Christian Refugee Relief Fund, Disaster Relief, Ultrasound Initiative, and Coats for Kids.  Internationally, their charitable work has partnered with the Special Olympics, the Global Wheelchair Mission, Habitat for Humanity and they currently assist persecuted Christians in the Middle East.

The Knights of Columbus were “woke” a century before woke pretenders like Harris.

Can you imagine the outcry had Harris attacked someone’s membership in a Muslim organization?

Buesher’s membership in the Knights and indirectly his Catholicism underscores Harris’s proclivity for character assassination that was again on display during Brett Kavanaugh’s confirmation hearing for the Supreme Court.

The Knight’s adherence to Catholic teaching is steadfast and their pro-life activism a direct link to it. Charity, unity, fraternity, and patriotism are the organization’s four core principals. How can Harris condemn such an organization, and how does Joe Biden, a self-proclaimed Catholic, pick Harris as his possible successor?

Certain bigotries are acceptable, and even encouraged in today’s Democratic Party.

Apparently, Democrats will not tolerate Catholics who take the church’s teachings seriously.

During the Democratic primary debates, Harris went so far as to challenge Biden for his longtime support of the Hyde Amendment, which prohibits federal funding for abortion.  Bowing to the pressure, Biden has since acquiesced.

Harris grandstands on abortion and demeans the Church’s teachings and gets away with it because the Catholic episcopacy remains silent.  Harris is not alone as other Democratic politicians who claim to be Catholic are just as guilty.  Recently, Gov. Andrew Cuomo signed an abortion bill making the barbaric procedure legal up until birth and New York’s Cardinal Dolan is mute.  Biden flip flops and again more silence.

Harris’s anti-Catholic bigotry is reminiscent of too many stories of persecution Catholics faced earlier in our nation’s history.  According to Democrats, there is no religious test for public office, unless you are a Catholic who lives the faith as called.

Harris advocates for expanding women’s “reproductive rights” and supports abortion on demand for a woman’s entire pregnancy, including at the moment of birth.  Harris twice voted against the Born-Alive Abortion Survivors Protection Act, which would require doctors to provide the same care to babies who survive botched abortions as they would to any other newborn.

A fact lost on every Democrat is that more children’s lives have been lost through abortion within the last week, than have died since COVID was identified.

How can Democrats crusade about COVID deaths while embracing abortion?

Yet, here was pro-abortion Kamala Harris touting “the infinite worth of every human being” in her Democratic Convention acceptance speech as the party’s nominee for vice president.

Harris accepted the nomination from someone who when questioned about Biden’s multiple accusers of sexual assault said, “I believe them and I respect them being able to tell their story and having the courage to do it.”  Moreover, Harris has even called Biden a racist during one primary debate.

A pro-choicer, like Harris is unfit to lead because they outright reject the sanctity of human life.

Marginalizing Christian America will define the Biden-Harris administration.  If you aren’t convinced, visit Biden’s website where he has pledged to jettison the Trump administration’s work toward protecting religious freedom.

Kamala Harris wanted a man disqualified from serving on the federal bench for mere membership in the Knights of Columbus.

Where does that leave the rest of us provided their ticket prevails in November?

[Comment Guidelines - Click to view]
The Remnant values the comments and input of our visitors. It’s no secret, however, that trolls exist, and trolls can do a lot of damage to a brand. Therefore, our comments are heavily monitored 24/7 by Remnant moderators around the country.  They have been instructed to remove demeaning, hostile, needlessly combative, racist, Christophobic comments, and streams not related to the storyline. Multiple comments from one person under a story are also discouraged. Capitalized sentences or comments will be removed (Internet shouting).
The Remnant comments sections are not designed for frequent personal blogging, on-going debates or theological or other disputes between commenters. Please understand that we pay our writers to defend The Remnant’s editorial positions. We thus acknowledge no moral obligation whatsoever to allow anyone and everyone to try to undermine our editorial policy and create a general nuisance on our website.  Therefore, Remnant moderators reserve the right to edit or remove comments, and comments do not necessarily represent the views of The Remnant.
back to top
Last modified on Saturday, September 5, 2020
Tweet