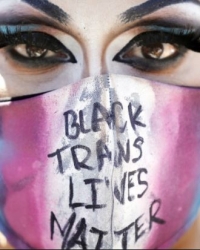 November’s election countdown is underway. The political signage has sprouted up among the inescapable roofing, paving, and real estate placards.  On my daily jaunt, there was even one “Black Lives Matter” (BLM) sign among them, nearly equaling the support for Joe Biden (two signs total) in a neighborhood as ethnically diverse as the Augusta National Golf Club.

Unlike the two Biden signs, the BLM one is sequestered away from the road and practically hidden from view.  The sign, situated just off their manicured lawn and in the shadow of their well-upholstered Wayne Manor façade, appears to be a first-degree case of virtue signaling serving as free publicity for the Pied Pipers of Marxism.

What’s in a name?

Shakespeare’s Juliet may have believed that a rose by any other name is still a rose, but it was the Romans who trusted “nomen est omen” — a name is a destiny because names, do in fact, matter.  If BLM had instead labeled themselves “Black Lives Matter, Too”, perhaps they would have had a more benevolent welcoming. 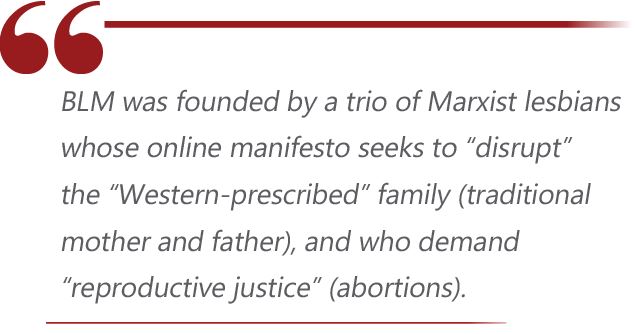 BLM sounds like a social justice crusade for blacks, but they actually represent very few.

Perhaps the folks with the signage and those in professional sports fail to realize how BLM has hijacked George Floyd’s death in order to stage a second and perverted sexual revolution.

BLM was founded by a trio of Marxist lesbians whose online manifesto: “What We Believe,” seeks to “disrupt” the “Western-prescribed” family (traditional mother and father), who have emancipated themselves from “heteronormative thinking” (anti-hetrosexual).  They also demand “reproductive justice” (abortions) and “foster a queer‐affirming network” (pro-gay/transgender) that is the core of their creed to remake America in their image.

When anyone takes a knee or plants a sign, they pay homage to BLM’s anti-Christian credo.

More proof was when BLM activist Sean King tweeted: “All murals and stained glass windows of white Jesus, and his European mother, and their white friends should also come down. They are a gross form of white supremacy.”  Christian churches and statues are now being desecrated with the BLM campaign as cover.

Their phrase “Black Lives Matter” emphasizes the duality of convenience.  In one instance, it’s a slogan.  However, when someone tries to extend it to all of humanity it becomes exclusive.

Objecting to painting BLM on the street is unassailable.  BLM’s fanatic platform cannot be questioned because, after all, “black” is in its name.

Bestselling black author Shelby Steele said BLM is a “distraction” from the real issues.  If black lives really mattered, they would be tearing down abortion mills and crack houses instead of statues and burning Bibles.  Likewise, they would address the high murder rate perpetrated by blacks against blacks.  By focusing on police racism, which by every available statistic has been in decline for decades, they reveal their true agenda: nullify the police so that chaos reigns over civic comity without which a unified republic cannot endure.

BLM demands that racism is systemic and that you either support them or you are racist.  The only thing systemic is leftism, as BLM completely ignores the greater quantity of crime: deprived education and fatherless homes infecting black communities.

By claiming to fight bigotry, they not only excuse, but abet it, which is just another form of bigotry.  You cannot simultaneously fight against violence while endorsing it.

Despite such radical ambitions, many folks stop at nothing to coddle and praise BLM.  Such is the consequence of today’s remorseless zero-sum politics.

When BLM supports charter schools and educational vouchers, fights against the tens of thousands of black abortions annually, and promotes the notion that families with both a mother and father are the best chance of a child succeeding in life, their mantra and theatrics is just more divisive and violent political theater.

By displaying BLM signage, you not only sympathize with their cause, but provide license for them to engage in wanton violence and destruction.

Whether they can figure it out or not, BLM are the heirs of the Jim Crow racists, as they continue to mock everything the American nation was founded upon.

What really matters is how and why BLM wars against the Christian values of Western Civilization, and does so by sawing away at the very limb they stand on.

[Comment Guidelines - Click to view]
The Remnant values the comments and input of our visitors. It’s no secret, however, that trolls exist, and trolls can do a lot of damage to a brand. Therefore, our comments are heavily monitored 24/7 by Remnant moderators around the country.  They have been instructed to remove demeaning, hostile, needlessly combative, racist, Christophobic comments, and streams not related to the storyline. Multiple comments from one person under a story are also discouraged. Capitalized sentences or comments will be removed (Internet shouting).
The Remnant comments sections are not designed for frequent personal blogging, on-going debates or theological or other disputes between commenters. Please understand that we pay our writers to defend The Remnant’s editorial positions. We thus acknowledge no moral obligation whatsoever to allow anyone and everyone to try to undermine our editorial policy and create a general nuisance on our website.  Therefore, Remnant moderators reserve the right to edit or remove comments, and comments do not necessarily represent the views of The Remnant.
back to top
Last modified on Tuesday, August 25, 2020
Tweet

More in this category: « Head Immunologist at Tel Aviv U: "99.99% of world’s population has survived COVID" NOT SO SUDDEN DEATH »