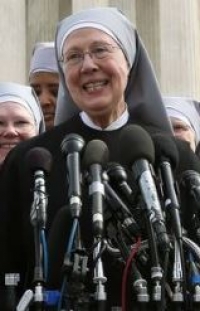 The majority opinion, written by Justice Clarence Thomas, ruled that the Trump administration's challenged rulemaking was aboveboard, and hailed the work of the Little Sisters of the Poor.

"For over 150 years, the Little Sisters have engaged in faithful service and sacrifice, motivated by a religious calling to surrender all for the sake of their brother," Thomas wrote. "But for the past seven years, they -- like many other religious objectors who have participated in the litigation and rulemakings leading up to today’s decision -- have had to fight for the ability to continue in their noble work without violating their sincerely held religious beliefs."

"We dedicate our lives to this because we believe in the dignity of every human life at every stage of life from conception until natural death," Veit said. "So, we've devoted our lives -- by religious vows -- to caring for the elderly. And, we literally are by their bedside holding their hand as they pass on to eternal life. So, it's unthinkable for us, on the one way, to be holding the hand of the dying elderly, and on the other hand, to possibly be facilitating the taking of innocent unborn life."

Join the Remnant League of the Sacred Heart’s Rosary Crusade for re-election of Donald Trump.

[Comment Guidelines - Click to view]
The Remnant values the comments and input of our visitors. It’s no secret, however, that trolls exist, and trolls can do a lot of damage to a brand. Therefore, our comments are heavily monitored 24/7 by Remnant moderators around the country.  They have been instructed to remove demeaning, hostile, needlessly combative, racist, Christophobic comments, and streams not related to the storyline. Multiple comments from one person under a story are also discouraged. Capitalized sentences or comments will be removed (Internet shouting).
The Remnant comments sections are not designed for frequent personal blogging, on-going debates or theological or other disputes between commenters. Please understand that we pay our writers to defend The Remnant’s editorial positions. We thus acknowledge no moral obligation whatsoever to allow anyone and everyone to try to undermine our editorial policy and create a general nuisance on our website.  Therefore, Remnant moderators reserve the right to edit or remove comments, and comments do not necessarily represent the views of The Remnant.
back to top
Last modified on Thursday, July 9, 2020
Tweet