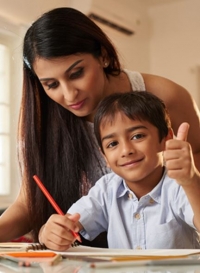 In any case, homeschooling saved the day! Think what would have happened to America’s public school children during lockdown if the homeschool pioneers had not been blazing the trail for decades, showing the rest of the country, not only how it’s done but that, in most cases, it’s the superior option.

Good luck to the leftist progressivists in outlawing homeschooling next time around! God Himself has intervened, it seems, and if they want to orchestrate a second wave lockdown they'll only be solidifying the permanent establishment of the most effective means of undermining public-school indoctrination camps on the face of the earth.

So knock yourselves out, guys! Homeschooling may ultimately well play a huge part in America's salvation.

The video below offers insight into the “trending topic” that is home schooling in America. It comes from the vantage point of an avowed libertarian, thus providing some indication of just how widespread support for homeschooling is actually becoming. It’s definitely NOT just the Little House on the Prairie crowd any more. Homeschooling is gaining big momentum, and it will spread like wildfire if, after Covid, the crazy "experts" style America's public schools after the Soviet model to "keep us safe".

Congratulations, homeschoolers. You were the avant-garde. They made fun of you for years, but guess what?  Nobody’s laughing now.

From the video description:

So, as media outlets put it, there are now "parents and guardians forced into full-time homeschooling." Being out of school, they say, will “will set back a generation of children.”

Bunk. Media outlets make it sound awful, but the reality is that homeschooled kids -- despite being from poorer families, on average, do better on tests. They also do better in college, and they are less likely to drink or do drugs. Here are the studies on it.

Homeschooling is also easier than ever, with new technology offering amazing new options for learning at home. Watch the video below to see how parents are switching to homeschooling in the pandemic."

[Comment Guidelines - Click to view]
The Remnant values the comments and input of our visitors. It’s no secret, however, that trolls exist, and trolls can do a lot of damage to a brand. Therefore, our comments are heavily monitored 24/7 by Remnant moderators around the country.  They have been instructed to remove demeaning, hostile, needlessly combative, racist, Christophobic comments, and streams not related to the storyline. Multiple comments from one person under a story are also discouraged. Capitalized sentences or comments will be removed (Internet shouting).
The Remnant comments sections are not designed for frequent personal blogging, on-going debates or theological or other disputes between commenters. Please understand that we pay our writers to defend The Remnant’s editorial positions. We thus acknowledge no moral obligation whatsoever to allow anyone and everyone to try to undermine our editorial policy and create a general nuisance on our website.  Therefore, Remnant moderators reserve the right to edit or remove comments, and comments do not necessarily represent the views of The Remnant.
back to top
Last modified on Tuesday, May 26, 2020
Tweet

More in this category: « RESISTANCE is NOT FUTILE: Minnesota Governor Backs Down to Bishops' Defiance CHARTRES PILGRIMAGE 2020: Catholic Clans around the World Unite, You can Join! »