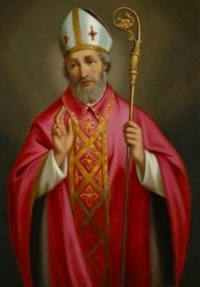 Today we pay homage to St. Anselm of Canterbury--the great Benedictine monk who was born in Lombardy and died in Kent, England. The great philosopher and theologian served as Archbishop of Canterbury from 1093 - 1109.

The brilliance of Saint Anselm's thinking and writing about the nature of faith and of God has intrigued and influenced scholars since the Middle Ages. His highly respected work, Monologium, rationalizes proof of God's existence. His Proslogium, advances the idea that God exists according to the human notion of a perfect being in whom nothing is lacking. Since they were first written, both works have been studied and praised by many of the world's greatest theologians and philosophers.

Born near Aosta in Italy in 1033, Anselm began his education under the tutelage of the monks of a local Benedictine monastery. After his mother passed away, Anselm observed a period of grief and mourning and then traveled throughout Europe. At that time, the spiritual and intellectual reputation of the monk Lanfranc, who belonged to the monastery of Bec in Normandy, was widespread. Anselm was drawn to Lanfranc, and in 1060 attached himself to Lanfranc's abbey. The community immediately recognized Anselm's unique abilities and he was soon teaching in the abbey school. He was made prior of the monastery in 1063.

It was during his days at Bec that Anselm composed his innovative works on the existence and nature of God. Indeed, it was only out of a sense of obligation and submission to the will of the community that he undertook the duties and burdens of administration.

His election to the position of abbot of the community in 1078 speaks to the love and regard in which he was held by his confreres. But Bec was not to be the end of his journey. In 1093 he was summoned to England to become the archbishop of Canterbury, succeeding his master and spiritual director Lanfranc. Anselm's years at Canterbury were not lacking in political controversy. He showed great courage in disputing William II and Henry I in regard to ecclesiastical abuses that were being visited upon the church by those kings. Twice he was banished while making appeals in Rome. Twice he returned to Canterbury, his abilities as an extraordinary theologian, negotiator, and statesman having added luster and authority to the cause of the church.

Throughout his years, Anselm maintained a strong allegiance to his monastic lifestyle and to his intellectual pursuits. He composed several philosophical and theological treatises, as well as a series of beautiful prayers and meditations in addition to his oftentimes inspirational correspondence. Anselm held the position of archbishop until his death in 1109. A biography by his contemporary Eadmer provides many insights into the life of this remarkably saintly and scholarly man.

He was canonized in 1494 by Pope Alexander VI.

St. Anselm, Pray for us.

[Comment Guidelines - Click to view]
The Remnant values the comments and input of our visitors. It’s no secret, however, that trolls exist, and trolls can do a lot of damage to a brand. Therefore, our comments are heavily monitored 24/7 by Remnant moderators around the country.  They have been instructed to remove demeaning, hostile, needlessly combative, racist, Christophobic comments, and streams not related to the storyline. Multiple comments from one person under a story are also discouraged. Capitalized sentences or comments will be removed (Internet shouting).
The Remnant comments sections are not designed for frequent personal blogging, on-going debates or theological or other disputes between commenters. Please understand that we pay our writers to defend The Remnant’s editorial positions. We thus acknowledge no moral obligation whatsoever to allow anyone and everyone to try to undermine our editorial policy and create a general nuisance on our website.  Therefore, Remnant moderators reserve the right to edit or remove comments, and comments do not necessarily represent the views of The Remnant.
Last modified on Wednesday, April 29, 2020