A Madonna for Italy on the Feast of the Annunciation 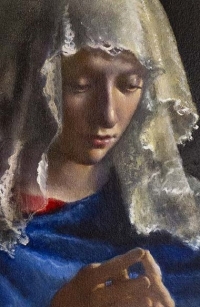 On this the Feast of her Annunciation, may the Madonna intercede for us to end the scourge in Italy and throughout the world!

Swathed in ultramarine and crowned with roses, Gwyneth's Madonna is inspired by the work of the Italian Baroque painter Sassoferrato.

“I wanted to portray the exaltation of the humble of which Our Lady sang in her Magnificat and the beatific repose of dwelling in perpetual contemplation of the Word,” Gwyneth says.

Deposuit potentes de sede, et exaltavit humiles.
He has put down the mighty from their seat, and exalted the lowly.  —Luke 1:52

Tradition attributes several paintings and sculptures of Our Lady to St. Luke, among them the Salus Populi Romani, which Pope St. Gregory the Great carried in procession during the plague which ravaged Rome in 590, and the original, Spanish Virgin of Guadalupe. The evangelist and patron saint of artists also crafted an exquisite portrait of Our Lady in the first two chapters of his Gospel, which provide many details unavailable elsewhere.

Twice St. Luke states that Our Lady “kept all these words in her heart.” After the adoration of the shepherds, who have recounted the words of the angels announcing and singing the praises of the Savior’s birth, Luke tells us, “Mary kept all these words, pondering them in her heart” (2:19). Twelve years later, after the boy Jesus is found in the Temple and asks whether Mary and Joseph did not know “that I must be about my father’s business,” we are told that “they understood not the word that he spoke unto them” but that “his mother kept all these words in her heart” (2:49-51). Luke’s repetition draws attention to both episodes, where Our Lady meditates first on the words of angels and then on the words of her Son. In the clarity of her Immaculate Heart, free from the darkening of the intellect that accompanies sin, the Seat of Wisdom nonetheless pondered over the words of angels and kept the inscrutable words of the Lord.

The extraordinary humility and interiority of the Blessed Virgin attested by these verses is one of the themes of a new Madonna by sacred artist Gwyneth Thompson-Briggs. Stylistically indebted to the 17th century Marian devotional images of Giovanni Battista Salvi da Sassoferrato, particularly his Madonna in London’s National Gallery, Gwyneth’s Madonna also incorporates brushwork inspired by Titian and drapery influenced by 15th century Flanders.

[Comment Guidelines - Click to view]
The Remnant values the comments and input of our visitors. It’s no secret, however, that trolls exist, and trolls can do a lot of damage to a brand. Therefore, our comments are heavily monitored 24/7 by Remnant moderators around the country.  They have been instructed to remove demeaning, hostile, needlessly combative, racist, Christophobic comments, and streams not related to the storyline. Multiple comments from one person under a story are also discouraged. Capitalized sentences or comments will be removed (Internet shouting).
The Remnant comments sections are not designed for frequent personal blogging, on-going debates or theological or other disputes between commenters. Please understand that we pay our writers to defend The Remnant’s editorial positions. We thus acknowledge no moral obligation whatsoever to allow anyone and everyone to try to undermine our editorial policy and create a general nuisance on our website.  Therefore, Remnant moderators reserve the right to edit or remove comments, and comments do not necessarily represent the views of The Remnant.
back to top
Last modified on Wednesday, March 25, 2020
Tweet

More in this category: « An Important Video Message of Hope from Bishop Athanasius Schneider “Cancel the Decrees!”: High Dudgeon from Progressive Liturgists »