An Important Video Message of Hope from Bishop Athanasius Schneider 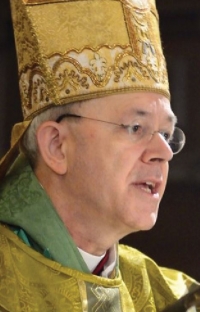 Editor's Note: In the latest episode of From The Editor’s Desk, I attempt to point out that this crisis, as unsettling as it is, has also managed to put the lie to the entire Modernist revolution in the Catholic Church—a revolution which has left the Church utterly defenseless against moral evil, spiritual evil and now even temporal sickness, panic and fear.

In this beautiful video letter to us all, Bishop Athanasius Schneider explains how it is quite possible to stay close to God and the Church during times of trouble. His Excellency grew up under Soviet tyranny and so quite obviously knows of what he speaks. He also knows how to survive and keep the Faith, and it is for this reason that I’m so happy to offer this hopeful video message (below, along with the complete transcript) to Remnant readers at this particular moment of uncertainty.

God has not abandoned us. God has not abandoned His Church. There is a worldwide brotherhood of faithful Catholics—subjects of Christ the King, children of the Queen of Heaven—and we are all in this together, united in the old Faith. We are not alone, Deo Gratias. May God bless, and Mary keep, Bishop Athanasius Schneider.  - Michael J. Matt

Living the Faith When Public Worship is Prohibited

MILLIONS OF CATHOLICS in the so-called free Western world will, in the coming weeks or even months, and especially during Holy Week and Easter, the culmination of the entire liturgical year, be deprived of any public acts of worship due to both civic and ecclesiastical reaction to the outbreak of Coronavirus (COVID-19). The most painful and distressing of these is the deprivation of Holy Mass and sacramental Holy Communion.

We experience currently the atmosphere of an almost planetary panic. The drastic and disproportionate security measures with the denial of fundamental human rights of freedom of movement, freedom of assembly, and freedom of opinion appear almost globally orchestrated along a precise plan.

Watch his address below:

An important side-effect of this new “sanitary dictatorship” that is spreading throughout the world is the growing and uncompromising ban on all forms of public worship. The current situation of the prohibition of public worship in Rome brings the Church back to the time of an analogous prohibition of Christian worship issued by the pagan Roman emperors in the first centuries.

Clerics who dare to celebrate Holy Mass in the presence of the faithful in such circumstances could be punished or put in prison. Such a “sanitary dictatorship” has created a situation which breathes the air of the catacombs, of a persecuted Church, of an underground Church, especially in Rome. Pope Francis, who on March 15, with lonely and halting steps, walked through the deserted streets of Rome on his pilgrimage from the image of the “Salus populi Romani” in the church of Santa Maria Maggiore to the Miraculous Cross in the church of San Marcello, conveyed an apocalyptic image. It was reminiscent of the following description of the third part of the secret of Fatima (revealed on 13 July 1917): “The Holy Father passed through a big city half in ruins and half trembling with halting step, afflicted with pain and sorrow.”

How should Catholics react and behave in such a situation? We have to accept this situation from the hands of Divine Providence as a trial, which will bring us a greater spiritual benefit than if we had not experienced such a situation. One can understand this situation as a divine intervention in the current unprecedented crisis of the Church. God uses now this situation to purify the Church, to awaken the responsible in the Church, and in first place the Pope and the episcopate, from the illusion of a nice modern world, from the temptation to flirt with the world, from the immersion in temporal and earthly things. The powers of this world have now forcibly separated the faithful from their shepherds. The clergy is ordered by governments to celebrate liturgy without the people.

This current purifying divine intervention has the power to show all of us what is truly essential in the Church: the Eucharistic sacrifice of Christ with His Body and Blood and the eternal salvation of immortal souls. May those in the Church who are unexpectedly and suddenly deprived of what is central start to see and appreciate its value more deeply.

In spite of the painful situation of being deprived of Holy Mass and Holy Communion, Catholics should not yield to frustration or melancholy. They should accept this trial as an occasion of abundant graces, which Divine Providence has prepared for them. Many Catholics have now in some way the chance to experience the situation of the catacombs, of the underground Church. One can hope that such a situation will produce the new spiritual fruits of confessors of faith and of holiness.

This situation forces Catholic families to experience literally the meaning of a domestic church. In the absence of the possibility to assist at Holy Mass even on Sundays, Catholic parents should gather their families in their homes. They could assist in their homes at a Holy Mass broadcast on television or the internet, or if this is not possible, they should dedicate a holy hour of prayers to sanctify the Day of the Lord and to unite themselves spiritually with the Holy Masses celebrated by priests behind closed doors even in their towns or in their vicinity. Such a Sunday holy hour of a domestic church could be done for instance in a following way:

Prayer of the rosary, reading of the Sunday Gospel, Act of Contrition, act of Spiritual Communion, Litany, prayer for all who suffer and die, for all who are persecuted, prayer for the pope and the priests, prayer for the end of the current physical and spiritual epidemic. The Catholic family should also pray the Stations of the Cross on Fridays of Lent. Furthermore, on Sundays, parents could gather their children in the afternoon or in the evening to read to them from the Lives of the Saints, especially those stories drawn from times of persecution of the Church.

Catholics who are now deprived of assisting at Holy Mass and receiving sacramentally Holy Communion, perhaps only for a short time of some weeks or months, may think about these times of persecution, where faithful for years couldn’t assist at Holy Mass and receive other sacraments, as was the case, for instance, during the communist persecution in many places of the Soviet Empire.

Let the following words of God strengthen all Catholics who are currently suffering from being deprived of the Holy Mass and Holy Communion:

Do not be surprised at the fiery trial when it comes upon you to test you, as though something strange were happening to you. But rejoice insofar as you share Christ’s sufferings, that you may also rejoice and be glad when his glory is revealed.” (1 Peter 4: 12–13) “The Father of mercies and God of all comfort, who comforts us in all our affliction, so that we may be able to comfort those who are in any affliction, with the comfort with which we ourselves are comforted by God.” (2 Cor. 1:3–4) “That the trial of your faith, being much more precious than of gold that perishes, though it be tried with fire, might be found unto praise and honor and glory at the appearing of Jesus Christ” (1 Peter 1:6–7).

In the time of a cruel persecution of the Church, St. Cyprian of Carthage (+258) gave the following edifying teaching on the value of patience:

It is patience which firmly fortifies the foundations of our faith. It is this which lifts up on high the increase of our hope. It is this which directs our doing, that we may hold fast the way of Christ while we walk by His patience. How great is the Lord Jesus, and how great is His patience, that He who is adored in heaven is not yet avenged on earth! Let us, beloved brethren, consider His patience in our persecutions and sufferings; let us give an obedience full of expectation to His advent” (De patientia, 20; 24)

We want to pray with all our trust to the Mother of the Church, invoking the intercessory power of Her Immaculate Heart, that the current situation of being deprived of Holy Mass may bring abundant spiritual fruits for the true renewal of the Church after decades of the night of the persecution of true Catholics, clergy, and faithful that has happened inside the Church. Let us hear the following inspiring words of St. Cyprian:

If the cause of disaster is recognized, there is at once found a remedy for the wound. The Lord has desired His family to be proved; and because a long peace had corrupted the discipline that had been divinely delivered to us, the heavenly rebuke has aroused our faith, which was giving way, and I had almost said slumbering; and although we deserved more for our sins, yet the most merciful Lord has so moderated all things, that all which has happened has rather seemed a trial than a persecution.” (De lapsis, 5)

God grant that this short trial of the deprivation of public worship and Holy Mass instill in the heart of the pope and the bishops a new apostolic zeal for the perennial spiritual treasures, which were divinely entrusted to them — i.e., the zeal for the glory and honor of God, for the uniqueness of Jesus Christ and His redeeming sacrifice, for the centrality of the Eucharist and its sacred and sublime manner of celebration, for the greatest glory of the Eucharistic Body of Christ, the zeal for the salvation of the immortal souls, for a chaste and apostolic-minded clergy. May we listen to the following encouraging words of St. Cyprian:

Praises must be given to God, and His benefits and gifts must be celebrated with giving of thanks, although even in the time of persecution our voice has not ceased to give thanks. For not even an enemy has so much power as to prevent us, who love the Lord with our whole heart, and life, and strength, from declaring His blessings and praises always and everywhere with glory. The day earnestly desired, by the prayers of all has come; and after the dreadful and loathsome darkness of a long night, the world has shone forth irradiated by the light of the Lord.” (De lapsis, 1)

March 19, 2020
+ Athanasius Schneider, auxiliary bishop of the Archdiocese of Saint Mary in Astana

[Comment Guidelines - Click to view]
The Remnant values the comments and input of our visitors. It’s no secret, however, that trolls exist, and trolls can do a lot of damage to a brand. Therefore, our comments are heavily monitored 24/7 by Remnant moderators around the country.  They have been instructed to remove demeaning, hostile, needlessly combative, racist, Christophobic comments, and streams not related to the storyline. Multiple comments from one person under a story are also discouraged. Capitalized sentences or comments will be removed (Internet shouting).
The Remnant comments sections are not designed for frequent personal blogging, on-going debates or theological or other disputes between commenters. Please understand that we pay our writers to defend The Remnant’s editorial positions. We thus acknowledge no moral obligation whatsoever to allow anyone and everyone to try to undermine our editorial policy and create a general nuisance on our website.  Therefore, Remnant moderators reserve the right to edit or remove comments, and comments do not necessarily represent the views of The Remnant.
back to top
Last modified on Monday, March 23, 2020
Tweet

More in this category: « #COVIDIOT: You can't go to Mass, but you can get an abortion A Madonna for Italy on the Feast of the Annunciation »