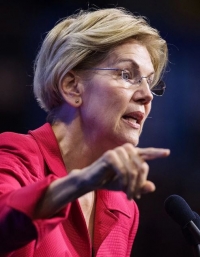 A flawless political campaign would always stay on script, but there is no such animal, and any large campaign – especially one for the presidency – will always have some nuanced spontaneity.  In the epoch of Trump, such stimulus occurs almost daily. For Democratic presidential hopeful Warren, that time and place arrived last month after a campaign stop in Grimes, Iowa.

Warren’s debt-forgiveness plan to eliminate student-loans would terminate over $640 billion and up to $50,000 per person.  Nevertheless, there remains no stipulation to compensate those who worked and saved to finance their children’s collegiate education. This prompted a father of a college student to ask Warren, “My daughter is getting out of school.  I’ve saved all my money, so she doesn’t have any student loans. Am I going to get my money back?”

The Remnant Newspaper is the oldest traditional Catholic periodical in the world.
Do you subscribe yet?

“Of course not,” Warren responds.  To underscore his circumstance, the man claimed that “My buddy had fun, bought a car, went on vacations. I saved my money.  He made more than I did, but I worked a double shift, worked extra. My daughter’s worked since she was 10.” What was becoming evidently clear is that under Warren’s amnesty plan, the frustrated father would foot the bill for his buddy’s indifference.  “So, you’re laughing,” the dad says of Warren, who denies it. “We did the right thing, and we get screwed,” frustrated he walks away.

Through student loans, the government subsidizes student debt, which enables colleges to increase tuition without regard to the rate of inflation encouraging students to stay the course. In the end, it will be the taxpayers who will be on hook for the bill.  After all, nothing is truly free. Warren’s Robin Hood agenda would only exacerbate the issue that amounts to legalized theft by taking from those who earned it and giving it to those who haven’t.

This fleeting encounter in America’s heartland on a cold January night takes to heart a multitude of issues with Democrats.  Those who sacrificed to pay for their kids’ tuition lose whereas those who didn’t skate by. Those who lead physically destructive lifestyles receive healthcare paid for by those who were responsible. EBT card holders have money freed up for alcohol and tobacco.  Granted, we should help the least among us but with a hand-up rather than a series of handouts.  Help should come with responsibility to the society that provides it.  But leftists like Warren are tone deaf to such logical reasoning and accountable governance.

In Leftist America, if you work and pay your bills, you are taking advantage of those who rely on others to finance their lifestyle – it is Aesop’s Fable about the grasshopper and the ant come to life.  Sacrifice, saving and living below your means, while believing it is your responsibility and not the government’s to provide for your family is a sucker’s game in today’s Democratic Party, where the attributes for success are a sense of grievance, entitlement, and a total absence of any personal responsibility for anything.

Label it: “Crony Hedonism.”  The pleasure is private while the consequences are public and socialized.  This is why socialism results in a complete moral corruption of society.

Warren wants free college, free health care, and the banning of fossil fuels as outlined in her party’s eccentric Green New Deal.  If this sounds too good to be true, it is because payment will be rendered.  No one concerns themselves with costs or the repercussions such freebies would have on the nation’s growing economy.

Warren had better hope that the dad who confronted her is still up to working overtime – and lots of it.

[Comment Guidelines - Click to view]
The Remnant values the comments and input of our visitors. It’s no secret, however, that trolls exist, and trolls can do a lot of damage to a brand. Therefore, our comments are heavily monitored 24/7 by Remnant moderators around the country.  They have been instructed to remove demeaning, hostile, needlessly combative, racist, Christophobic comments, and streams not related to the storyline. Multiple comments from one person under a story are also discouraged. Capitalized sentences or comments will be removed (Internet shouting).
The Remnant comments sections are not designed for frequent personal blogging, on-going debates or theological or other disputes between commenters. Please understand that we pay our writers to defend The Remnant’s editorial positions. We thus acknowledge no moral obligation whatsoever to allow anyone and everyone to try to undermine our editorial policy and create a general nuisance on our website.  Therefore, Remnant moderators reserve the right to edit or remove comments, and comments do not necessarily represent the views of The Remnant.
Last modified on Thursday, February 13, 2020