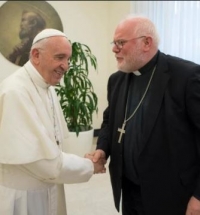 The Catholic Herald is reporting that the notorious heretic Reinhard Cardinal Marx is stepping aside as chairman of the German Bishops’ Conference:

The Archbishop of Munich and Freising said in a statement that it was time for the “younger generation” to take charge when the bishops meet for their spring General Assembly early next month.

Cardinal Marx pointed out that if he were to serve a second term, he would be 72 by the time it finished, almost at retirement age.

“I was very happy to hold the office of chairman of the German Bishops’ Conference, but ‘everything has its time’,” the cardinal said.

Marx has been chairman of the German Bishops’ Conference since March 2014, and has served as Archbishop of Munich and Freising since 2008.

Good riddance, Excellency. We trust that Our Lady and the Acies Ordinata played a part in your decision to do the right thing:

[Comment Guidelines - Click to view]
The Remnant values the comments and input of our visitors. It’s no secret, however, that trolls exist, and trolls can do a lot of damage to a brand. Therefore, our comments are heavily monitored 24/7 by Remnant moderators around the country.  They have been instructed to remove demeaning, hostile, needlessly combative, racist, Christophobic comments, and streams not related to the storyline. Multiple comments from one person under a story are also discouraged. Capitalized sentences or comments will be removed (Internet shouting).
The Remnant comments sections are not designed for frequent personal blogging, on-going debates or theological or other disputes between commenters. Please understand that we pay our writers to defend The Remnant’s editorial positions. We thus acknowledge no moral obligation whatsoever to allow anyone and everyone to try to undermine our editorial policy and create a general nuisance on our website.  Therefore, Remnant moderators reserve the right to edit or remove comments, and comments do not necessarily represent the views of The Remnant.
back to top
Last modified on Wednesday, February 12, 2020
Tweet

More in this category: « The Feast of Saint Anselm NOTHING PERSONAL, JUST BUSINESS: Time for Ganswein to Go »