National Review Nails It! Francis is a HUGE problem 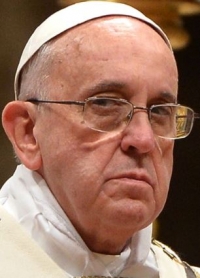 As further evidence of our ongoing contention that there's a worldwide awakening going on where Pope Francis is concerned, even the National Review is recognizing the massive infiltration of the Catholic Church that is the Francis pontificate.

“As the estimable Father Raymond J. de Souza pointed out in the November 28, 2019, issue of the Catholic Herald, Pope Francis has a soft spot for leftist leaders who oppress civil society in the name of social justice and solidarity with the poor...

“The Church is literally becoming secular, obsessed with political and social matters far beyond its competence. As the courageous Kazakh bishop Athanasius Schneider suggests in his new book, Christus Vincit: Christ’s Triumph over the Darkness of the Age, Pope Francis mainly attends to secular issues — climate change, the environment (right down to the proper disposal of plastic), immigration — and does so in an “exaggerated manner.” This “frenzied activism,” as Schneider calls it, crowds out concern for the life of the soul and the “supernatural realities” of grace, prayer, and penance.”

We don’t typically love to send our readers away from this site, but you should probably go read the rest of the article at NationalReview.com right now.

[Comment Guidelines - Click to view]
The Remnant values the comments and input of our visitors. It’s no secret, however, that trolls exist, and trolls can do a lot of damage to a brand. Therefore, our comments are heavily monitored 24/7 by Remnant moderators around the country.  They have been instructed to remove demeaning, hostile, needlessly combative, racist, Christophobic comments, and streams not related to the storyline. Multiple comments from one person under a story are also discouraged. Capitalized sentences or comments will be removed (Internet shouting).
The Remnant comments sections are not designed for frequent personal blogging, on-going debates or theological or other disputes between commenters. Please understand that we pay our writers to defend The Remnant’s editorial positions. We thus acknowledge no moral obligation whatsoever to allow anyone and everyone to try to undermine our editorial policy and create a general nuisance on our website.  Therefore, Remnant moderators reserve the right to edit or remove comments, and comments do not necessarily represent the views of The Remnant.
back to top
Last modified on Sunday, February 9, 2020
Tweet