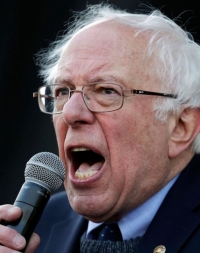 The list of executive orders also includes gems like directing the Justice Department to legalize marijuana and declaring climate change a national emergency.

Feeling the Bern yet, America? He’s the Dems' lead on the way to the primaries, and guess who inspires him?

You see how these two men just really care about poor people? Such humility and humanity, heading right out to those peripheries to help the marginalized! That must be why this rabid pro-abort is a big fan of Pope Francis… They’ve got a lot in common!

And I guess the “sick and corrupt society” Sanders mentions is you and me, right? With our obnoxious love of unborn babies and God-fearing methods of policing ourselves through Christian values and such.

[Comment Guidelines - Click to view]
The Remnant values the comments and input of our visitors. It’s no secret, however, that trolls exist, and trolls can do a lot of damage to a brand. Therefore, our comments are heavily monitored 24/7 by Remnant moderators around the country.  They have been instructed to remove demeaning, hostile, needlessly combative, racist, Christophobic comments, and streams not related to the storyline. Multiple comments from one person under a story are also discouraged. Capitalized sentences or comments will be removed (Internet shouting).
The Remnant comments sections are not designed for frequent personal blogging, on-going debates or theological or other disputes between commenters. Please understand that we pay our writers to defend The Remnant’s editorial positions. We thus acknowledge no moral obligation whatsoever to allow anyone and everyone to try to undermine our editorial policy and create a general nuisance on our website.  Therefore, Remnant moderators reserve the right to edit or remove comments, and comments do not necessarily represent the views of The Remnant.
back to top
Last modified on Friday, January 31, 2020
Tweet