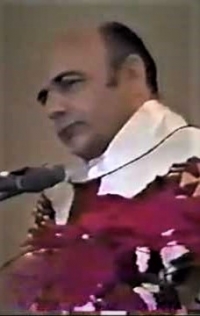 Monsignor Ruscitto was a long-time Remnant subscriber and an occasional contributor to these columns. He suffered a great deal for his commitment to Catholic tradition, the old Latin Mass and his priestly vocation, having ceased offering the Novus Ordo back in 1976 when he was the pastor of Holy Family Church in Kingsburg, California.

On a short list of supposedly "disobedient" priests—for instance, Oswald Baker in England, Father Harry Marchosky in California, Archbishop Lefebvre in Switzerland—Monsignor Ruscitto was cast into the exterior darkness decades ago, while the Hans Kungs, the Schillebeexks, the Rahners and the Haerings and all the rest of that strange consortium known as "progressives" were monopolizing the lecture platforms and public media of all descriptions.

In life, Monsignor Ruscitto took a lonely stand that offered an inspiring and heroic example of fidelity to the priestly vocation at a time when so many priests were abandoning the fort. His story is told in the Angelus Press' popular book: Priest, Where Is Thy Mass? Mass, Where Is Thy Priest?

Eternal rest grant unto him, O Lord, and let perpetual light shine upon him. May his soul and all the souls of the faithful departed rest in peace.

[Comment Guidelines - Click to view]
The Remnant values the comments and input of our visitors. It’s no secret, however, that trolls exist, and trolls can do a lot of damage to a brand. Therefore, our comments are heavily monitored 24/7 by Remnant moderators around the country.  They have been instructed to remove demeaning, hostile, needlessly combative, racist, Christophobic comments, and streams not related to the storyline. Multiple comments from one person under a story are also discouraged. Capitalized sentences or comments will be removed (Internet shouting).
The Remnant comments sections are not designed for frequent personal blogging, on-going debates or theological or other disputes between commenters. Please understand that we pay our writers to defend The Remnant’s editorial positions. We thus acknowledge no moral obligation whatsoever to allow anyone and everyone to try to undermine our editorial policy and create a general nuisance on our website.  Therefore, Remnant moderators reserve the right to edit or remove comments, and comments do not necessarily represent the views of The Remnant.
back to top
Last modified on Tuesday, June 18, 2019
Tweet